Famous People From Joplin, Missouri, and Other Joplin, MO, Facts

Although I live in Oklahoma as an adult, Joplin, MO will always have a special place in my heart.. This is where I was born and raised, collected a host of precious childhood memories, and even where I met and married my husband.

I still have many family members living in this great little city. I used to think it was "huge" until I moved next door to Oklahoma City! Now, I often miss that compact little town and get a nostalgic feeling and occasional sense of "homesickness" each time I return.

There are so many cool facts about Joplin; more than many may realize! I also want my own kids to know about my hometown. I took them to the Dorthea B. Hoover Historical Museum a year or two back, a place where my mom often took me as a child, so they could have a little "hands-on" experience of my town's history. If you don't know where that is, it sits in Schifferdecker Park on the west side of town. Schifferdecker Park! Ahhh, the fun times!

For all of my friends, family and any other Joplin residents, (or if you have heartfelt ties to the little town like I do), I hope you'll enjoy reading and commenting. I tried to add several things that I thought would be of interest to my readers, but if there's something about Joplin that you've always wanted to know or have been curious about, send me a note or comment and I will do my best to research it for you and add it to this page. I hope every "Joplinite" finds this a useful and entertaining tool.

Do you recognize any of the celebrities that has called Joplin home? Check it out!

Cummings was an ambitious young man that was going to multiple colleges studying to become an engineer. However, his love for the arts won out and he focused his sights on another school and attended the American School of Dramatic Arts.

After making a trip to England, he got this deranged idea that if he could convince Hollywood that he was in fact a British actor, that he may find more success. So the hopeful young man went as far as acquiring an alias and went by the name of Blade Stanhope Conway. (I wonder why he didn't just use one of his "other names". It's not like he didn't have a few to choose from)! However, this endeavor did not pan out as he had hoped and the best role that he was able to obtain was just an extra part.

After his British masquerade failure, he renamed himself again, this time going by the name, Brice Hutchens. It was under this name that he played a magic act in a Broadway production. Finally, he went by his own name, and success starting coming to him.

Cummings played a few dramatic roles in his lifetime, but is best remembered for his light-hearted comedy, including the Bob Cummings Show which ran from 1955 - 1958.

Cummings come down with Parkinson's disease in the 1980s and there was a drastic decline in both his mental and bodily functions. He passed away on December 2, 1990 at he age of 82.

Did you know that the godfather of Bob Cummings was Orville Wright? Pretty cool, huh?

He married, Geraldine Stowell on October 20, 1945 and they remained married until his death. The couple had three children and three grandchildren.

Weaver was very athletic and even placed in the 1948 Olympic Trials in the Decathlon. He was also a field and track athlete for the University of Oklahoma.

Dennis Weaver was probably best known as the playing the character of Chester Goode in the CBS television series, "Gunsmoke." He almost didn't get the part until he requested to read the script again, this time adding a countrified accent which helped him land the role.The bad leg and limp that he had in the show was all "made up" just to draw attention to his character because he was afraid he wouldn't be noticed when playing opposite James Arness who was four inches taller than him.

He struggled financially before landing the part of Chester Goode, earning only $60 a week delivering flowers. After he landed the part of Chester, CBS offered to pay him $300 a week to which he more than likely was too glad to accept. After nine years of playing Chester, his wages rose to an astounding $9,000 weekly.

Dennis Weaver passed away on February 24, 2006, from the complications of cancer.

Did you know that Dennis Weaver died the same day and at the same age as the Comedian/Actor Don Knotts?

Hughes was a dedicated traveler. At the age of twenty-one, Hughes took a job as a mess boy on a ship that was headed for Africa. He followed the west African coast for a total of six months and then signed on for a trip to Holland. Upon his arrival in Rotterdam, he abandoned the ship and caught a train to Paris, France. In Paris, he had a thrilling stay with black American exiles of Montmartre. This quest lasted five months. Hughes described his stay in Paris as "right out of a book." It was also in Paris that he fell in love with a lovely English-African girl. However, the story didn't have a happy ending because her father ended the romance. Hughes continued his travels until World War II when he was force to end his journeys.

In the meantime, his poetry thrived. Forever in print, this dreamer put his thoughts and feelings on paper to be shared and enjoyed by the world for centuries to come.

Langston Hughes passed away May 22, 1967 but his poetry lives on.

Langston Hughes' picture was printed on a US 34¢﻿ postage stamp. The stamp was issued on his 100th birthday, February 1, in the year 2002.

Langston Hughes and His Poetry

Click to read about the Actor, Lonnie Chapman. Born in Tulsa, OK but "raised in Joplin."

This is the part that I've dreaded writing. I had first published this article only a short time before the 2011 tornado. I've put off mentioning it for a long time, but now it is an important part of Joplin's recent history. In fact, Joplin changed so much after this catastrophic event, that when I returned months later for a visit I didn't even recognize where I was. People's homes, businesses and schools were reduced to piles of splintered wood, Almost everyone in Joplin was affected in some way. Some through personal loss and others that knew those who suffered loss.

I was at church on a Sunday night when we got the call. At first, we didn't know if our families were safe and we were unable to reach some of them. I remember them telling us, "There are bodies laying in the streets!" Then reports started coming in of family members losing their homes. Although none of my family members lost their lives, many of their friends, acquaintances and family through marriage was hit very hard. Some lost their children, a cousin lost his girlfriend and another cousin lost her schoolmate just hours after their senior graduation. The whole ordeal was traumatic and was the subject on everyone's lips for months after the event. Although I'm a writer, there is no words that can describe the devastation. To be totally honest, I don't want to even try. That is why I have included links on the subject that will tell the story in my behalf. All I have left to say is, "May God Bless my hometown, Joplin Missouri! The people that reside there, do business, go to school, and all those who hold Joplin dear to their hearts!"

Joplin Missouri's Official Slogan: "Proud of Our Past...Shaping Our Future"

The land area is 31.4 square miles and the population density is 1,585.2 per square mile

The water area is 0.1 square mile 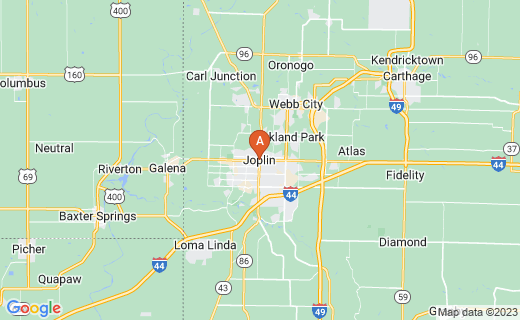