TV Show Themes Songs that are Like Television Karaoke

TV Theme Songs We Love to Sing Along With

Sitcoms, Dramas, Sci-Fi and More...We all have our favorite classic television shows and they each have unique theme songs that get stuck in our collective heads. We find sing-a-long songs with fun and quirky lyrics and those with deep and meaningful content. Many have become part of the musical landscape, existing beyond the land of re-runs. Below are just a few of my favorite television themes. Grab the remote, settle in with some pop-corn and sing along. Then, share your favorites in the comments below, so that we may enjoy your favorites as well. 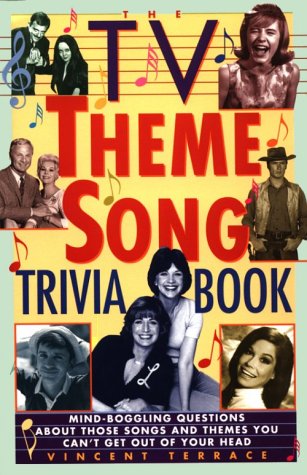 The TV Theme Song Trivia Book: Mind-Boggling Questions About Those Songs and Themes You Can't Get Out of YourHead
Buy Now

"Just sit right back and you'll hear a tale..." And now...you ARE singing the rest of the theme...Gilligan's Island ran for only 3 seasons from 1964 to 1967 on CBS. This silly situation comedy was fairly popular in it's original run, but became a much bigger hit in syndication as an afternoon kid's show. Many guest actors, actresses and celebrities joined the castaways of the SS Minnow in their many adventures, misadventures and failed attempts to get rescued from this tiny island. Our 7 stranded castaways were Gilligan, the Skipper too, the Millionaire (Thurston Howell III) and his wife (Lovey), the movie star (Ginger Grant), the Professor and Mary Ann. They were finally rescued and then decided to return to the island to run a vacation resort.

"The Ballad of Gilligan's Isle" ~ Sherwood Schwartz (who also created the Brady Bunch) & George Wyle (who also wrote 400 other songs, including "It's the Most Wonderful Time of the Year")

performed by The Wellingtons

"Did I ever tell you about my uncle..." Mr. Kotter returned to his old high school, Buchanan High, to teach the remedial students known as the "Sweathogs"; a group to which he once belonged. To quote John Travolta's character that is the "What? Where? Why?" of the show. Gabe Kotter had to help these less than academic students to succeed, while defending their antics to the principal, all the while raising a family. The show ran for 4 seasons on ABC from 1975 to 1979. We came to know, love and laugh with (and at) this eclectic class of clowns, including Gabe Kotter, Mr. Woodman, Vinnie Barbarino, Arnold Horshack, Freddie "Boom-Boom" Washington and Jaun Epstein. The biggest star to be launched from this show was the actor who played Vinnie Barbarino, John Travolta.

The Dukes of Hazzard Theme Song

The Dukes of Hazzard

Bo and Luke Duke, Uncle Jessie, Cooter, Enos, Rosco,Boss Hogg and of course Daisy Duke all gave us some laughs from Hazzard County. A good ol' car chase in the General Lee, a 1969 Dodge Charger with custom paint job, got your blood pumpin' and then...It would freeze in mid-air as the narrator (Waylon Jennings) would question whether those good ol' boys would make a clean get away or not. This series, based on the B-movie Moonrunners, ran for 7 seasons on CBS from 1979 to 1985 and had two short-lived spin-offs, the Dukes (animated) and Enos.

Dukes of Hazzard, The
Buy Now

All in the Family Theme Song

All in the Family

This poignant and satirical show took a comedy framework and infused it with deep and topical social issues of the day...and did it to perfection. Archie Bunker, Edith "Dingbat" Bunker, Gloria and "Meathead" brought us years of laughs and thought provoking dramedy. There was not a topic of the times that went unaddressed. For nine seasons between 1971 and 1979 CBS aired this gem. There were 5 spin-off shows that followed, including Maude, The Jeffersons and Archie Bunker's Place. We are glad the network and syndication didn't "stifle it".

"Those Were the Days" ~ Lee Adams & Charles Strouse

All in the Family: The Complete Series [DVD]
Buy Now

"Flintstones, meet the Flintstones"...Often called the Honeymooner's of the stone age, it was chock full of rocky puns and creative "retro" technology. Fred, Wilma, Barney, Betty, Pebbles, Bamm-Bamm and Dino had 6 seasons of fun in Bedrock between 1960 and 1966 on ABC. More than 10 short-lived spin-off series are chipped of this modern stone-age family as well as two live action movies, toys and even chewable vitamins.

George and Louise "Weezie" Jefferson move away from their neighbors, the Bunkers, to the "deluxe apartment in the sky". The main cast was rounded out by Tom and Helen Willis, their son Lionel and the doorman, Bentley. The laundry king moved from Queens, settled in Manhattan and served up 11 seasons on CBS from 1975 to 1985. The spin-off Checking In was short-lived, lasting only 4 episodes, it was more of an accessory than a full outfit.

Tesla had no idea...Welcome to the most dysfunctional radio station on TV. From Les Nessman's "taped" office to Herb Tarlek's plaid suits. Watching Jennifer get coffee and type...oh, wait...she never did that. The quirky characters Dr. Johnny Fever and Venus Flytrap filled the airwaves with music and personality. This 4 season CBS show "signed off" in 1982.

What happens when aliens give a school teacher a super hero outfit with a multitude of powers? A funny little show that ran for 3 seasons on ABC from 1981 to 1983. Ralph Hinkley loses the instruction book to the suit and has then, with the help of his girlfriend Pam and Agent Bill Maxwell, must try to figure out how the suit works, unlock it's powers and save the day once a week. After the attempted assassination of Pres. Reagan, his name was changed to Hanley...

"It's time to put on make-up...It's time to dress-up right" Join Kermit the Frog, Miss Piggy, Fozzie Bear, Gonzo and Rowlf on the most ingenious and creative variety show to ever grace the small screen. Watch Dr. Bunsen Honeydew and Beeker explore "science", the Swedish Chef cook up something (or not), travel with Pigs in Spaaaaace and listen to the musical stylings of Dr. Teeth and the Electric Mayhem Band featuring Animal on the drums. Anyone who was anyone guest starred on the Mupppet Show during it's 5 year run on CBS from 1976 to 1981. And, Statler & Waldorf always got the last word.

A fish out of concrete pond story...Big oil, Bankers and "Granny"...The mishap adventures of the Clampett kin-folk after old Jed found some Texas tea and became a millionaire. Jed, Granny, Elly May and Jethro moved to Beverly...Hills that is. For 9 years they lived in the lap of luxury on CBS from 1962 to 1971.

Never has finger snapping been so cool. They're creepy and they're cooky...and yet they kind of remind us of a family reunion. Morticia and Gomez, Uncle Fester, Lurch, Wednesday and Pugsley live in the strangest museum...um, I mean house on the block. The Family where Thing is a name and Itt is a cousin lasted 2 seasons on ABC from 1964 to 1966.

TV's most famous blended family, where Alice the housekeeper serves up plenty of "pork chops and applesauce" to the Brady family. Mike Brady and his three boys, Greg, Peter and Bobby are joined by Carol and her three girls, Marcia, Jan and Cindy and the games (and a few sing-a-longs) begin. For 5 seasons and a few guest stars we joined the Brady Bunch on ABC from 1969 to 1974.