Synopsis: The friendly-but-forgetful blue tang fish begins a search for her long-lost parents, and everyone learns a few things about the real meaning of family along the way. 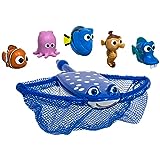 All hail the mighty voice of Sigourney Weaver, or else she'll use her robotic suit from "Aliens" to kick your a**

"Finding Dory" may not be the sequel that everyone was asking for, but it's certainly a welcomed surprise. The story picks up several months later after the events of "Finding Nemo." Dory starts to regain tidbits of her memories back, as she vaguely starts to remember how she lost her parents, and how she inevitably met Marlin, in the previous story.

Dory scours the seas for her missing parents, but she inevitably gets lost along the way. In similar fashion to the first movie, Marlin and Nemo are forced to find Dory, while she goes off on her own journey of self discovery.

While "Finding Dory" does share some parallels to it's prequel, there's quite a few differences as well. In the original "Finding Nemo", it was more about Marlin learning how to let go of his son. Allowing him to grow up, and make his own choices in life. Meanwhile, his son was shown to learn how to fend for himself. It was a coming of age story, where both characters had a lot to learn about life. Dory was mostly there for comedic relief at the time,but she was never the main character, at least until now.

While Dory is placed in the same position Nemo was in the last movie, the circumstances and morals are a bit different this time. In "Finding Dory", Dory isn't merely trying to find her parents. She's actually trying to find herself. As it was mentioned in the previous film, she has problems with her short term memory, so she forgot an awful lot about her past. As we watch Dory embark on this epic journey, we're able to see her not only reconnect with some familiar faces from her mysterious past, but we also see her learn the true meaning of what a family is. Coming to terms with her mistakes, while growing to appreciate the new family she's formed along the way. It's a touching story to say the least, and the moral about Dory finding herself couldn't have been better executed.

However, the weakest part of this story would probably be Marlin and Nemo's journey to find Dory though. As many fans know from watching the first movie, Marlin had a journey of self discovery, as he not only learned how to let go of his son, but he also learned how to stop playing it safe. He learned how sometimes you can't always allow fear to dictate your actions, or prevent you from trying new things. Otherwise, you'll never grow as a person. Here, he still learns a moral, but his journey is a bit different this time. He learns how important Dory has been to him all this time, and how families can come in all shapes and sizes. Granted, it's not quite as deep as the moral he learned in the last movie, but it's still worth pointing out.

I guess my main problem with this side of the story is the fact that Nemo really doesn't seem to add anything to this movie. In "Finding Nemo", Dory was the comic relief. The insane breakout character to Marlin's proverbial "straight man", which made for some hilarious situations. In "Finding Dory", Nemo doesn't add anything to the story. No humor, nor does he have any arcs to help develop his character. If anything, he's just there for the ride because..why the hell not? And unfortunately for the overall story itself, it makes the parts whenever it had to focus on Marlin and Nemo seem kind of boring, by comparison.

When you stop and think about it, Nemo was never an interesting character to begin with. Sure, he went on a fantastic journey of self discovery in the last film, but it was really the colorful characters around him that made his side of the story interesting in "Finding Nemo." As for Marlin, he works better when he has an overly zealous personality to bounce off of, which is why the relationship between him and Dory worked so well in "Finding Nemo." Dory was a wide eyed optimist, who was a free spirit. Marlin was always the disgruntled pessimist, who always tried to play it safe. They were polar opposites, which made for some great comedic situations.

Here, Marlin is still basically the same character. Sure, he's a bit more open to listening to Nemo and Dory's advice this time around, but that's basically about it. And considering Nemo wasn't even the most interesting character in the last movie, it's not surprising that the chemistry between Nemo and Marlin to carry this part of the story doesn't work.

Apart from that minor nitpick, the rest of the movie is portrayed rather well. Unlike Marlin and Nemo's side of the story, Dory's side is where the real heart of this film lies. Cast with a rich slew of colorful characters that not only compliment the story, but each add something that wasn't there in the last movie. Take the whale shark, Destiny, for instance. She not only provides much needed exposition to Dory's life that wasn't there before, but she also helps Dory in a variety of ways that would've been next to impossible for some of the previous characters in "Finding Nemo."

As Jeremy Jahns pointed out in his review on youtube, Hank was arguably the most interesting new character in the entire film though.

Like Marlin in "Finding Nemo", Hank is pretty much the "straight man" in "Finding Dory." He's cynical and pessimistic, which acts as a perfect contrasts to Dory's personality. The only difference is that he speaks of a past, where he was always miserable out at sea, but he never goes into detail about what happened to him. Needless to say, the comedy and interactions between these two practically writes itself, which made me sad that we couldn't find out more about Hank's past, as there seems to be a great story to explore there.

As for the animation, you have to really hand it to Pixar for always pushing the envelope. Not only stepping up their game in terms of visuals, but the cinematography work in this movie is simply amazing. All the rotating camera work and wide angled shots really help set up the broad massive scope of Dory's adventure, which makes even the most mundane things we take for granted (i.e. aquarium exhibits) only seem that much more amazing; especially if you're able to see this in 3-D.

Overall, I can't say this film is better than "Finding Nemo", but it's arguably one of the best animated movies that I've seen in a while. Granted, it's no "Zootopia", but it's worth checking out if only to revisit the characters that we all know and love again, while meeting some interesting new ones for the first time.