Many people consider him to be the greatest composer who ever lived: Wolfgang Amadeus Mozart. The child prodigy who galivanted about the capitals of Europe performing before emperors and kings. The composer of hundreds of classical works, including the great operas Don Giovanni, The Magic Flute, and The Marriage of Figaro. The genius who left this earth all too soon at the age of 35.

We know about the variations on "Twinkle, Twinkle Little Star," about the child-sized violins, and about the less-than-cordial relationship Mozart had with fellow composer Antonio Salieri. Here are some fun and interesting facts about Mozart that you probably didn't know.

Johannes Chrysostomus Wolfgangus Theophilus Mozart was born in Salzburg, Austria on January 27, 1756. He was named for, respectively, the saint on whose day he was born (St. John Chrysostom), his maternal grandfather, and a godfather.

There's no evidence that Mozart ever used the first two names. As a child he was known as Wolferl or Wolfgangerl. As for the name Theophilus -- Greek for beloved of God -- Mozart did sometimes use the German equivalent, Gottlieb. He hardly ever employed its full Latin equivalent, Amadeus, although in signatures he occasionally styled himself as Wolfgang Amadè Mozart. At other times he would sign as W.A. Mozart, or simply Mozart. Since there can only be one Mozart, Mozart should suffice.

2. He Was a Religious Man

On seeing the film Amadeus, one is struck by how childish Mozart seems, even in adulthood. He laughs a lot, appears to be quite arrogant, and has a potty mouth. This portrait, while largely fictional, has some basis in reality. Mozart's letters are loaded with scatological references, which turns out to have been somewhat of a family tradition. His father, his mother, and his sister Nanerl could all be profane to varying degrees.

Despite this vulgar streak, however, the Mozarts were devout Catholics, and there's plenty of evidence to suggest that worship of God and gratitude to Him were never very far from Wolferl's mind. He attended mass. He prayed the rosary. He even wrote his share of religious music, although this does not represent a great body of his work like it does for say J.S. Bach. And though at times he could be ribald or flirtatious, there has never been any evidence to contradict Mozart's assertion to his father that he was a virgin when got married, nor is there any real evidence to support the idea that he ever cheated on his wife. As he once told his father, God was ever before his eyes.

Mozart's association with Freemasonry has been well-documented. Less well-known, however, is the fact that he was almost as devout a Mason as he was a Catholic -- not an incompatible position in the Austria of the late Eighteenth Century, where Freemasonry was not looked upon with the suspicion it received at other times and in other venues. (Masons, for their part, don't look upon Catholicism with suspicion -- or any other religion for that matter. Instead they preach the brotherhood of all men.)

Mozart was a member of the Viennese lodge Zur Wohlthätigkeit (Beneficence), which he joined in 1784. He faithfully attended lodge meetings and took part in lodge rituals, eventually working his way up to the level of Master Mason. Along the way he composed some pieces intended solely for use in Masonic ceremonies. Some scholars have even suggested that some of Mozart's later work, such as The Magic Flute, are rich in Masonic symbolism.

Notes from a Genius 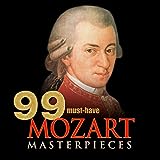 4. He Almost Signed a Prenup with His Wife

We generally think of prenuptial contracts as a modern invention, a means of financially protecting the well-off should a marriage turn out to be something less than neverending bliss. We certainly don't think of them as something that happened centuries ago, least of all for someone engaged in a profession that was rarely financially rewarding.

Yet when Mozart pursued Constanze Weber, the woman who became his wife, he found himself looking at a marriage contract. Originally he had been pursuing Constanze's older sister Aloysia, who ultimately rejected him. Three years later, the girls' mother, Maria Cäcilie Weber, took Mozart in as a boarder, and soon it was rumored that Mozart and Stanzerl, as he called her, were seeing each other romantically. Some of that was true, although Mozart did show an interest in other girls.

At one point, however, the relationship between Mozart and Constanze grew so serious that her guardian, Johann Thorwarth, presented Mozart with a document outlining an ultimatum: either Mozart agreed to marry Constanze within three years, or he'd have to give her an annuity. According to legend, Mozart was willing to sign but Stanzerl stepped in at the last moment and tore the document up.

That Mozart had finely-tuned ears should surprise no one. They were, however, apparently so sensitive that loud noises bothered the composer from a very early age. The blast of a trumpet, for example, often brought tears to his eyes. (He exhibited similar discomfort on a visit to the Tower of London, when he heard lions roaring.) For the cacophany to come from a single trumpet was bad enough, but to add a second or a third -- because those instruments didn't synch nearly as well with one other as did, say, violins -- was to Mozart like drawing one's fingernails across a chalk board.

Like any loving father, Leopold Mozart was concerned for his son and at one point even asked a friend, Johann Schactner, to follow Wolferl around and let out a blare of the trumpet occasionally in hopes that it would cure the boy. Schactner's efforts, however, only made matters worse. The surprise blasts would send young Mozart into a convulsive-like state, so he had to abandon that strategy. Fortunately, by the time Mozart was eleven he had outgrown much of his fear and could take the trumpet-playing in stride.