A nurturing but misunderstood housewife feels inadequate about her English. She is constantly belittled by her husband and daughter directly and indirectly about her lack of knowledge in the English language. An opportunity arises where the housewife goes to New York and she takes a speed learning class to learn English.

This movie can be appreciated by any culture. It's a tale of adjustment to the progression of family, finding self respect and self confidence, and determination and will power. The main actress, Sridevi, was a delight to watch and very appealing to the eyes in her beauty and mannerism. Sridevi played her character, Shashi Godbole, the matriarch, very well and you can't help but root for her. At first Shashi is shy, vulnerable, and constantly ridiculed by her family. Little by little, as the story progress, the mother finds the respect and confidence she always had.

The supporting cast were commendable in their role. You'll hate the husband and daughter, only because you can probably identify with them. All they ever do is berate Shashi even when they don't mean to harm her. Every immigrant family can relate to this story. I can relate to the story. Being a second generation Filipino American, growing up with immigrant parents felt embarrassing because of the language barrier but in retrospect, I know my parents, especially my mother, tried her best to adjust to a new culture and new language. Similar experiences happened to my Filipino, Korean, Mexican, and Nigerian friends and their families. This movie made me hate myself because I can see myself in the father and daughter but at the same time I was rooting for the mother, metaphorically, my mother.

The other cast members, in particular, the classmates and the niece, were fantastic. They were the opposite of the direct family. The classmate and niece was providing support and encouragement to Shashi that was never given by the people who loved her.

The scenery was fantastic. You can see the slow pace life of the Indian suburbs and the hustle and bustle of New York City. The movie was very diverse but the one drawback is the type cast of the classmates; almost downright stereotypical, but they too develop into confident and respected people.

This is a Bollywood movie but not a typical one. There are very little song and dance routines but the music does play an important role in the audience's emotions. This movie can be watched by anyone but it would be best if viewed by the family. And if you are a second generation immigrant who do not understand your parents, this movie will definitely tug on your heartstrings.

The Mumbai food delivery system is infamous for its fast and correct deliveries of lunches for the everyday salary man. But one mistaken delivery ends up tying a housewife and a future retiree, both lonely, into a long distant relationship. Can love happen to two people who have never met?

The Lunchbox, also known as Dabba (in Hindi), is a romance drama/comedy film set in Mumbai. A rare mixup of the dabbawalas, a complicated system for lunch deliveries, gets two lonely people involved with each other that brings out their romantic feelings for each other even though they never meet. They communicate to each other by attaching a note to the lunch deliveries. At first, the notes are short and simple but as the relationship progresses, both people long for each other but one is a bored and lonely housewife and the other is a soon to be retired lonely accountant.

Watch it here with English subtitles.

Irrfan Khan, most recognized as the star of Life of Pi (which in itself is a rewarding and beautiful film), plays the role of Saajan Fernandes, the lonely accountant. He lives for his job. He is cold to others, especially to his replacement. He is stubborn and tries to avoid the inevitable, retirement.

Nimrat Kaur is Ila, the lonely housewife that lives to please her husband. She makes her husband lunches with love everyday but is often taken for granted and ignored. She is bored but motivated, leery but dedicated. Motivated to keep the marriage alive; dedicated to keep the family happy. But to no avail, she is often overlooked until she "meets" Saajan.

Both leads are perfect in their roles. They embody their character. The story is a bit slow but still engaging and gives the audience enough curiosity for them to keep watching. Both characters have subplots that defines them. The lonely housewife becomes suspicious of her husband and the accountant gets involve in the life of his replacement.

The plot is not very original. It reminded me of the Korean film, Il Mare, or the American remake, The Lake House, which involves mistaken messages to long lost loves. What it lacks in originality is made up by the fine acting and engaging dilemma of the characters. It is a story of what could have been. It is a story of rolling with the punches. It is a story of food for thought.

Seven months pregnant mother to be, Vidya Bagchi, arrives to Kolkatta from London looking for her husband after not hearing from him for several days after daily communications. She goes to the police for help but no one is willing to aid her except for one honest cop. As they pursue an investigation on the whereabouts of her husband, every lead ends up at a dead end because no one has ever heard or seen the husband.

The tagline of the movie is "The mother of a story". That is not even an exaggeration. This movie was intense and suspenseful as it gets. Whatever movies you thought was suspenseful and thrilling, Kahaani will be one of your top ten in that genre. This movie is not what it seems and that is what makes the journey of the story very rewarding as if you climbed Mt. Everest and are seeing the world at its peak.

The lead is played by, Vidya Balan, a great actress who portrays her character as a feisty, fearless woman set in an unfamiliar territory looking for her love at all cost while being seven months pregnant.

This movie was intriguing from the get go. The direction, done by Sujoy Ghosh, of the film was very immersive. Ghosh's filmography is mainly comedic so it was very surprising that Kahaani was as thrilling and engaging as it is. It would be like if the Farrely Brothers directed Inception as good as Christopher Nolan did.

Watch it here without English subtitles.

The city of Kolkatta was as much of a supporting character as the cast. The city was portrayed as beautiful and dangerous, much like the lead character. The people of the city help the viewer feel the intensity and commotion of the film. 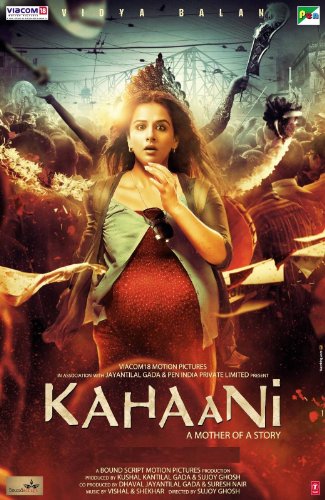 If you thought Indian films were just a bunch of song and dance, Kahaani will wipe that stereotype from your mind. Kahaani is like the flash bomb from Men in Black that completely erases your mind from what you just heard and saw. Kahaani will completely erase any hesitant or even reluctant thought in your mind that makes you think Indians can not make an awesome suspense thriller.

Set in India, a stranger in a new land questions the reasoning behind all things including love, family, and religion. Along the way he intrigues a journalist with his conclusions of why things are the way they are and opens the minds of all people.

PK is the latest great movie that has come out of Bollywood. Compared to the other three movies mentioned in this review list, this is more along the lines of the traditional long running time with a lot of singing and dancing. The movie is so enjoyable, that you want to sing and dance to.

This movie has created a little controversy in India because of the subject matter of religion, but set the controversy aside and listen to the message the movie is trying to convey. I won't go into to much detail of the religious topic, but the message of religion is as much profound as in the aforementioned Life of Pi.

Much like in 3 Idiots, the director, Rajkumar Hirani, and Aamir Khan, who plays the title character PK, poses questions on some of the traditional Indian way of thinking. Khan was very likable in the movie just like he was as Rancho in 3 Idiots.

Playing opposite to Khan is Anushka Sharma, who is Jaggu in the film. She holds her own against Khan as the Devil's advocate to PK. The supporting cast are somewhat one dimensional, with a few standouts like Sanjay Dutt (plays Bhairon Singh) and Saurabh Shukla (plays godman, Tapasvi) but helps progress the story and the message.

Behind the Scenes Clip

This movie is beautiful in every way. The cinematic score, the cinematography, the editing, and the narrative mixes together like a tasty treat for your eyes and ears, like a halo halo for your viewing pleasure. A good movie is entertaining and leaves a good impression on you. A great movie opens your mind and questions your values. PK is a great movie.

Which movie will you watch?