Frank Sinatra, Jr. - Sounds Similar To His Dad, But Different And VERY Good!

I can only imagine how difficult it must be to follow in the footsteps of a "famous" Father. On June 26, 2011 we noticed that there was a show at the Orlean's Showroom, here in Las Vegas, starring Frank Sinatra, Jr. I went into this show with absolutely no knowledge of the man or things he had been through in his life. All we knew was that he is the son of Frank Sinatra!

It was an absolutely wonderful show and I highly recommend seeing him if you ever get the chance to do that. He sings in a warm baritone reminiscent of his Father's voice, different, but very good! And he is keeping alive that "big band" sound from yesteryear... you just don't get to hear this music much any more! He is one of the few performers left who still uses a lot of live musicians in the background, rather than a synthesizer.

I'll tell you a cute little story from before the show started. Two older women, one using a walker, walked in and were shown to their seats by an usher who himself had to be at least in his 70's, if not 80's. One woman said to this usher... "once the show starts, if there are empty seats, can we move UP?" This usher without missing a single beat looked at my husband and I and with a wink of an eye and laughter in his voice, said "Now, why in the world would you want to do THAT? You want to see his wrinkles up close?" THEN, this lady replies "well, just look the OTHER way when we move, ok?" It was hilarious!! They very well could have been Frank Sinatra Jr. "groupies!"

The show was wonderful, so enjoyable to hear these songs that I hadn't heard in years...and it brought back memories from visiting my Grandmother when I was a child! He did some of his Father's music and some of his own, and the show was interspersed with interesting stories and jokes that he had heard growing up watching his father's shows. He told a funny joke by a comedian that used to open shows for his father. This comedian liked to get audience participation during his part of the show, so he would ask the audience, "is anyone here FROM Las Vegas?" When he would get a reply, he would ask them "let me ask you something... was the "Thunderbird" hotel ever NEW?" VERY funny!!

He shared stories of being backstage in the days of "The Rat Pack" which included Frank Sr,, Sammy Davis, Jr, Joey Bishop and Dean Martin. You can see some of their influence in his show, but he still makes his show his own unique creation. It is a warm, loving tribute to a father that you can tell he loved very much. And he ends the show by saying that through it all "I did it 'My Way'." I got goosebumps when he sang that line!

Now a few weeks later, my husband's father was visiting, he recently turned 80, and we told him that we had been to see Frank Sinatra Jr. He told us "do you know that one time when he was young, he was kidnapped?" I had no idea! This prompted me to try to learn a little more about this fascinating man.

I found out that he was born Franklin Wayne Sinatra on January 10, 1944 in Jersey City, New Jersey. A little bit of interesting trivia... his Father's name was "Francis"...but his name is "Franklin" because he was named after FDR. His father was on the road a lot when he was a child, but Frank Jr. recalled wanting to become a piano player, singer and songwriter from early on.

He is the younger brother of singer and actress Nancy Sinatra, and the older brother of Tina Sinatra who later grew up to be a television producer.

He started out performing in local clubs and was on the road quite a bit early in his career. He has guested on television shows, and hosted a summer replacement show for The Dean Martin Show. He sang in his own band in Las Vegas casino's and has been an opening act at other casino's.

At one time, he even had a guest spot on "The Soprano's" in a part where it wasn't certain whether he was acknowledging or "mocking" the stories that had gone around for years about his father's involvement in "the mob." And in 2006, he had a guest spot on an episode of "Family Guy" called "Brian Sings and Swings." He sang several songs in that show. He has had an extremely interesting and multi-faceted career!

In 1963, at the age of 19, he was due to perform at Harrah's Lake Tahoe on December 8th, but he wasn't able to appear because he was kidnapped that day by some very amateur kidnappers, Barry Keenan, and Joe Amsler. He was released two days later (right before his father's birthday). When his father celebrated his birthday that day, he requested no gifts, having his son back was the best "gift" he could have ever asked for. They had asked for ransom of $240,000 and it reportedly was paid to them (later recovered, except for about $6,000 that one of the men had used to buy furniture to impress his ex wife), Frank Sr. was later reported to have replied "let her keep the furniture." Frank Sr. had gotten used to walking around with a roll of dimes in his pocket to use in pay phones to communicate with his son's kidnappers, as they had demanded.  I heard a story that he carried a roll of dimes around for the rest of his life. The kidnappers only served a short time in jail. There was a rumor that the kidnapping was arranged by Frank Sr. to help to publicize his son's singing career, but that was later proven to be completely false.

Frank Sinatra Jr., upon his father's death, inherited his father's sheet music library. But he also does a lot of his own music, and in 2006 released an album entitled "That Face" and on it was a self-penned song titled "Spice."

His show is an interesting combination of "the old" and his own collection of songs. It is a wonderful, and brief step "back in time" to the days of Swing and Big Band music. I recommend seeing him if you have the chance to do that, as I told someone not long ago, we have to see "the legends" while they are still here.

I found out that there IS a show right here in Las Vegas called "The Rat Pack Is Back," which is a tribute to the days of Frank Sinatra, Sammy Davis Jr., Joey Bishop and Dean Martin! It is showing now at the Crown Theater in the Rio Hotel and Casino here in Las Vegas. We'll have to go check that out sometime!

I hope that Frank Sinatra, Jr. will continue to perform in his own unique style for many more years to come, and wish him continued success. Thanks, Frank Sinatra Jr. for doing what you do "your way." 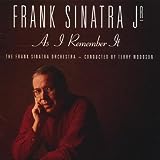 As I Remember It
Buy Now