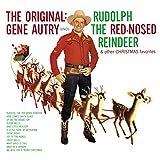 About 2 years ago, I bought a Realistic LAB-340 Turntable at a Goodwill. My research on it indicates Radio Shack sold this in the late 70s. Since then, Goodwills, Yard Sales, Church Rummage Sales, Thrift Shops, None have escaped my pillaging of their LP boxes for some Vintage Vinyl finds. I have quite a collection of Oldies, 80s new wave/punk. classic Rock, Jazz, Gospel, Exotica, etc. so, stay tuned to my hubspace...

On another recent trip to the local Goodwill, This was the one right in the front of the box. So Of course, I bought it. Gene Autry Sings Rudolph The Red-Nosed Reindeer & Other Christmas Favorites KX-11 Grand Prix Records, I think this was a reissue released in the 70s. If I am wrong, please leave a comment below with any information. It will be greatly appreciated...

Anyway... About Mr. Autry, since he was before my time. I only knew him as the owner of the California Angels, as they were known at the time, but he was once known as the Singing Cowboy. starring in several westerns during the 40s-50s, also releasing many albums in that time period... including this one.

1. Rudolph The Rednosed Reindeer - Autry Starts the album of with a very PC intro "Happy Holidays, folks, Wherever you may be!", Flawless song. His version is perhaps the greatest of them all. Dean Martin did a good take on it too.

2. Nine Little Reindeer - The Singing Cowboy reworks the song "Ten little indians" into the tale of Santa rustling up the posse for his yearly flight but missing one important element - Rudolph!. Great for teaching kids to count as it is very catchy! Why isn't this getting more play on those radio stations that start playing Christmas songs on Halloween?

5. Up On The House Top - Amusing song revealing the secrets of Santa's toy-delivery methods. another classic

1. Sleigh Bells - Autry's version is another that needs to see more play on the radio.

2. o Little Town Of Bethelem - His intro goes like this "I don't think any Christmas album would be complete without telling you in song the most beautiful, inspiring story ever told - The Story of Christmas" and who am I to argue? Classic

3. Silent Night - Beautiful, feels like you're sitting right around the campfire.

Now, I do not want to start any conspiracies but, the rest of the album:

5. We Wish You A Merry Christmas

I really do not think these are Gene Autry singing. Sounds more like a choir of some sort. Checking the album's label and sleeve offers no help. only Gene Autry is credited. This is something else you can comment on if you know who is singing.

UPDATE: On January 1, 2010, it was announced that Mr. Autry will be among four Cowboys Of The Silver Screen" honored this year by getting themselves on a United States Postal Stamp. The others are: Roy Rogers, Tom Mix, And William S. Hart.

A hearty tip of the hat to the Singing Cowboy.