This video was the first I ever saw and immediately made me a fan!

The words flow out of his mouth like art. They catch your attention. They make you laugh. Sometimes they bring a touch of sadness, but one thing is for sure, you WILL feel his poetry in one way or another. George Watsky began poetry slams as a teen. By 2006 he was the Youth Speaks Grand Slam Poetry Champion. Watsky appeared on the last season of Russell Simmons Presents Def Poetry in 2007 as a freshman in college. Since then he has gone on to perform at over 150 colleges. On top of that in the new age of internet fame he has become a YouTube celebrity!

Watsky announced the new album will be released August 12th 2014!!!

While great at fast raps, certainly not his only talent. MUST hear though!

I figured I would include these lyrics since most of this rap is hard to understand because it is so fast. So here they are.

Oh, hi
I'm that guy
Built so fly in a silk bow tie
Don't know why I'm built so fly
But I am, no lie
Oh my
Rolled by on a lowride Huffy
Sitting on the pegs, shelltoes puffy
Cuff rolled up to my calf
Class out the ass
Bad with the swag like Buffy
Gotta be the one to bite the bullet
I'm a sinner but I bet I coulda been a better man
I wanna be Zen, but I go sipping on some medicine
Instead of meditating, but I get it when I can
I don't wanna wind up in the gutter with a bottle of malt
Liquor, bitter cause I never got a call
Telling me that it's all figured out
I'm sick of doubt, but I'm looking at the wall
Part of me was hoping to be caught up in the moment
And to be open to the good and the God in me
But I got a lobotomy
And I get that I oughta become a bit of an oddity
When somebody gets offended by the thought of me

"Who's he? "... You gotta be kidding me!
Do me like Gabourey Sidibe
If you see me with a chickadee
No diggity, it'll be giggity giggity giggity
Gonna send it like a letter from above
With a woman that I love, cause I get it like I live
But if my baby's gay, I'll say:
"You go, gay baby, work that crib!
Work that bib! Burp that kid!
Screw police, flip that car! "
I don't want a Jesus piece
But I want a Reese's Piece and a Kit Kat Bar
I want everybody focusing on getting me on Letterman
To kick it for the betterment of innocent Americans
Who never want to settle for their pop...
Or not... cause my bedroom rocks
And the beat still knocks when I sort my socks
I'm five-foot-eleven of sex
From the tip of my head to my gorgeous... knees

Why is George Watsky Different?

We all know what rap has turned into. It doesn't matter if you are a fan of rap or not, one thing is for sure, it has gone downhill. The songs are all about bootys and how many people you can sleep with. Lyrics that are genuine are far and few between.

While Watsky may have a few crazy lyrics and the occasional F word, his lyrics are usually fun and relaxed. They aren't the normal lyrics we hear on the radio. His sound and lyrics are original.

While no one likes to say this, truth is, most white rappers get known by cussing constantly and for their thuggish appeal. Watsky certainly has NO thuggish appeal. He couldn't be further from a thug if he tried. In my opinion this makes him worth listening to. I've been a fan of Eminem since I was very young, but there is only one Eminem, and really I get tired of white rappers trying to act just like him. It is a breath of fresh air to hear talent that is so different from the normal white rapper.

Celebrities! Is This One Different?

So I never have been one of those people to be a Celebrity follower. Honestly I don't really give a crap what celebs are doing. In a time when we are told what to like, what's the point in knowing anything about celebrities when there will be a new one each week that will turn out like all the ones before? This time I think we may have found some rays of hope for music.

I have been watching poetry slams for a while now. I get on YouTube, search poetry slams, and just click away for about an hour every night. Not long ago I ran across a video titled George Watsky - Drunk Text Message to God. I clicked and spent 5 minutes and 3 seconds in amazement. That night I spent almost 3 hours listening to his work. I know, I know. This makes me sound crazy. I assure you if you like poetry it is nearly impossible to stop listening once hearing some of the poets in these slams.

So with that said I want to make it very clear that I only know facts about him based on things he has stated in his videos, statements from his IAmA on Reddit, his Wednesday night youtube videos, and other research. If for any reason he ends up reading this I want to make it clear that if there are any inaccuracies I apologize! Please if anyone sees any inaccuracies leave me a comment and let me know!!

So no matter if you like just poetry or just rap or both, George Watsky is certainly worth the listen. I must say that I am hard to impress when it comes to all the wanna be celebrities and artists. Watsky however is impressive to me!! So if you are sitting around with nothing to do at work or at home head over to one of his sites and have a listen. 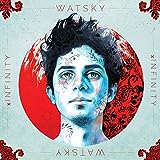 Have you heard of Watsky before now?