Celebrity Boxing Match: Get in the Ring!

Sam the Anchorman: Welcome to 'Celebrity Boxing Match', one of the most momentous sporting events in the World, watched by millions and adored by boxing fans all over.

It’s gladiatorial combat, nerve-shredding drama, it’s blood, sweat and tears with all the glamour, excitement and spectacle of a Cecil B. de Mille epic.

In fact the words ‘nitro’ and ‘glycerine’ immediately spring to my fevered mind, a lethal combination that could lead to one of the hugest explosions on the planet tonight on this spectacular evening.

Over at ringside we have Jerry Hoopla who has been talking with famous stars in the crowd and fat bankers in the first three rows. How's it going Jerry?

Jerry: Well I've really been soaking up the occasion as well as chatting to the occasional soak, the atmosphere is raucous and a bit menacing and the security team have had their work cut out. I'm with Jason Nutbar, the head of the security guys. How you guys handling it Jase?

Jason: Well we sure have to rely on our charm and deference to placate these crazed psychopaths otherwise we bring out the knuckle dusters.

But the crowd have been really loud and brought a great atmosphere, they just need to stay in their seats and stop hitting each other. And the seats need to stay too cos they been using 'em to hit one another.

Quite a few of the folk chucked out too Man, mainly for attempted stranglings and shootings as well as smuggling in their own food. Caught a lot smoking too, we're really clamping down on that. We like to keep the customers healthy as we throw 'em into the back door.

Jerry: You said 'into' the back door?

Jason: Yeah! If we aim their heads at the push-bar it opens pretty quickly. Saves a lotta time and manpower.

Jerry: Thanks Jase. I guess that kinda gives the TV viewers an idea of what's going on here at the moment. Back to you Sam in the studio.

Sam: Thanks Jerry, enjoy the the rest of the fight ... and the boxing. And don't forget your crash helmet and body armor. But in fact we're going straight back to Madison Square Garden and our commentator Larry Merchant. What's happening at the big match Larry?

Larry: Thank you Sam, the contestants have arrived, Saul 'Slash' Hudson's got the weight advantage but Axl W. Rose is a lively one, never been put to the floor, although he came close at Donington in England in 2006. Don't know what the 'W' stands for but there's been a few guesses, especially from my co-commentator Scott Weiland of the Stone Temple Pilots and ex-Velvet Revolver.

Scott: You asking me what does the 'W' stand for? Don't tempt me man.

Larry: We'll let that one go because Axl's in his corner, he's breathing into an oxygen mask. I guess that's to boost his energy levels.

Scott: The way he sings I'd guess it was that crazy helium stuff.

Larry: Meanwhile Slash sits in his corner smoking a Malboro light and drinking from an almost empty bottle of Jack Daniels. Looks like his trainer has covered his upper body in talcum powder.

Scott: Hey! That ain't talcum man, I reckon that's something special he's got on import. D'ya know what I mean?

Larry: Here we go! It's Round 1 and Axl springs to his feet, like a coiled, venomous snake ready to strike with piercing determination burning in his eyes. But what's wrong with Hudson!!, he's all over the place, his legs are bent like rubber and his arms are floating like a jellyfish. He looks exhausted and the fight hasn't even started.

Scott: I dunno dude, I just think they gave him the wrong gear , some kinda opiate or sumthin'.

Larry: Rose don't care, he comes out screaming, he lunges at Hudson and swings a murderous right hook....

Scott: Yeah! But he sure went down smiling.

Larry: He's got a vacant, glazed expression in those eyes, he doesn't look like he knows where he is, I don't think he even knows the referee is counting, the cameras are flashing and the crowd are screaming at him to get up.

Scott: He's hearing 'Perfect Day' Man, Lou Reed's in the house, you reap what you sow

Scott: You better believe it man, far out.

Larry: Axl goes crazy, his team are flooding into the ring, they're overjoyed. This surely makes up for the disappointment of Chinese Democracy and maybe proves that Axl can get a job done quickly after all.

But now, while their camp are celebrating his victory, we'll hand you back to Sam in the studio and a word from our sponsors.

Sam: Unbelievable!! The fight's over before it even got started. An amazing end, we hope you enjoyed it, if you blinked you missed it.

But look forward to future fights right here at this station.

We got the Gallagher brothers slogging it out for the rights to Oasis as they try to break America once again anyway they can.

We got Edward Van Halen versus David Lee Roth in a real proper Christian name kinda battle and we got a free for all with the whole of Limp Bizkit and Korn in a helluva tag-match that sure to be a riot.

And we might even get our man Mr Weiland into the ring with Slash if Axl ain't gonna go for a re-match.

Ritchie 'The Man in Black' Blackmore

"Uncomfortable, Itchy feeling down under"?

"Perhaps even some pain and bleeding on occasion?"

"Are you suffering from haemorrhoids?"

STAY AWAY FROM THIS MAN!!" 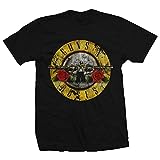