The legendary singer and guitar player, Glen Campbell, made a stop here in Las Vegas and gave the audience so many memories that they will cherish and keep in their hearts always. The sad part of this? One day, Glen will not be able to remember it. And that struck me as a tragic thing.

That is the horror of the disease that is afflicting this Rhinestone Cowboy. Glen was diagnosed in 2011 with Alzheimer's disease. He's been on a Goodbye Tour now for about nine months and will go for a while longer. The people who are helping him the most on this tour are three of his terrific, loving and dedicated children.

Ashley Campbell plays banjo, and keeps watch over her Dad like a hawk... which is a wonderful thing and a blessing to see. His son, Shannon, plays guitar and sings as well. Another son, Cal, plays drums. These three help their Dad and are watchful over him throughout a world wide tour that must be pretty tiring for him to do, yet exhilarating for everyone at the same time.

The love shown to Glen by this audience here in Las Vegas was amazing and gave me goosebumps. I can't honestly remember how many standing ovations he got, but it was fantastic to witness and the audience was so loving and respectful.

Ashley said in an interview last February that it has been hard to watch her Dad as he goes through this and at times, she misses who he was before. This is a very common sentiment expressed among loved ones of those with Alzheimer's. She is very protective of him and for good reason. She is not only there for him by standing nearby singing and playing banjo, you can also tell by the looks she gives him and by her loving smiles of encouragement that Glen is a very beloved father to all these kids.

Ashley was quoted in May as saying that she feels as if touring has been good for her father. Playing the guitar, which he loves to do, keeps him focused and she feels that it has been therapeutic for him. She also noticed that he does so much better when he is busy and active, better than he does when he is at home with too much time on his hands or when playing golf.

The thing is, Glen can still PLAY guitar amazingly well! We were pleasantly surprised by that. The guy has always been a magnificent guitar player, and he's STILL got it, in spite of the onset of Alzheimer's. The adorable thing is, he uses a teleprompter to help him with the words to songs, and it didn't seem like he was even using it all that much... but he has such a sense of humor and grace about it.

He was reading from it one time and then he looked at the audience and said "play Glen" as he read the words from the teleprompter. Then he said "I guess that means I'm supposed to play now!" It was funny and endearing to see that he is handling it all with an amazing sense of gracefulness and humility. He makes jokes about things. If he forgets something, he ad-lib's to make it seem like it was meant to be a part of the show!

Glen has had an amazing career, spanning over 50 years, and has been active not only in music but in movies as well. He's sold over 50 million records, and has had over 21 hits in the top 40 charts. Perhaps best known for such songs as "Rhinestone Cowboy," "By The Time I Get To Phoenix," "Galveston," and "Gentle On My Mind," he sang all of these at his show.

Probably one of the most AMAZING parts of the show, however, was when Glen and Ashley played "Dueling Banjo's" with Ashley on Banjo and her Dad on guitar. He was matching her note for note and I'll tell you, that young lady can PLAY the fire out of that banjo! It was amazing!

Ashley had said that she has always loved the banjo since she was a little girl and she would try to play it whenever she would see one in a music store. She actually didn't pick it up to begin seriously playing it until college. Ashley has attended Pepperdine University in California, majoring in Theater and has been in live productions performed by the college students.

She was in a production once called "The Kentucky Cycle" which took place in a setting in the 1800's in Kentucky. They asked her if she could learn to play banjo for that show, so she learned it and hasn't stopped since. Three short years later, she was playing backup for her Dad in live shows in New Zealand and Australia. A friend of hers who was in a Bluegrass band taught her to play the banjo "Scruggs style" and she is a remarkably fast learner.

All three Campbell siblings are active in music careers. Cal, who plays the drums, is with a band known as Instant People and Ashley has played in that band as well. Shannon and Ashley currently have a duo that they call "Victoria Ghost." Shannon plays guitar and Ashley on banjo and they harmonize together like only siblings can do. There is something very special about sibling harmony. Their sound is fresh, with kind of a folk sound to it, along with some country flair. Very cool! They opened this show for their Dad, and they did a fantastic job. They said it was their first time opening a show. Great job, Shannon and Ashley!

The funny thing in this show was when Glen would try to recall the chord that a song started with, Ashley told him "It's 'G' Dad" and he would say "G as in James?" Seemed like it was a joke that he enjoys using and we all got a kick out of it, too. He has got such a wonderful sense of humor.

Something I did NOT realize until I started to do research for this was that Glen Campbell played backup for Frank Sinatra on "Strangers In The Night." I also had no clue that he once filled in for six months for beach boy Brian Wilson. He was a part of the Beach Boys for those six months. He was quoted as saying he enjoyed that time that "It was fun." He also played guitar on the famous "Monkee's" song "I'm A Believer."

One of the things I remember most about Glen Campbell was in the late 1960's when he filled in for the Smother's Brothers summer replacement show. This was a series known as the "Glen Campbell Goodtime Hour." I remember watching that as a child growing up and I have been fond of Glen ever since. That show actually ran for four years, I had forgotten it ran that long. It was definitely a part of my growing up in the 60's and early 1970's memories.

Now in the 1980's... I think we might just skip that part! Glen was quoted as saying those were his "I went stupid" years. The years of a strange affair with Tanya Tucker. Now a funny thing from the Las Vegas show, when Shannon and Ashley were introducing themselves to the audience, Shannon was talking about things (rumors) about the Campbell kids and he said "and we are NOT Tanya Tucker's kids!" It was very funny and got a great reaction from the audience.

The 1980's were also when Glen met his current wife, Kim, something I'm sure he is very thankful for. She reminds me in a way of George Jones current wife, Nancy. Without these very strong and exceptionally loving women, I can't imagine where these two men might have been today. I'm sure that Glen feels very lucky to have the love of Kim in his life.

I think it's wonderful that Glen has become such a strong voice and advocate for research for Alzheimer's disease. It's such a devastating disease. Perhaps with such strong public figures bringing attention to it, I'm hopeful that there will be much more research devoted to finding a cure and emphasis put on helping those suffering with Alzheimer's disease today.

So, as Glen prepares to wrap up his Goodbye Tour, I am reminded of the etymology of the word "Goodbye." And that is that the word is derived from the phrase "God Be With Ye"... Goodbye. So, Goodbye Mr. Glen Campbell, and thank you for all of those years of wonderful memories and music you've shared with all of us. As this Rhinestone Cowboy rides away into the gold and orange streaked desert sunset, may "God Be With You" and with your beautiful family... Goodbye. And thank you for the wonderful memories.

We just heard today that Glen Campbell has passed away after a seven year battle with Alzheimer's Disease, R.I.P. to the Rhinestone Cowboy! Lots of wonderful memories are coming back today from seeing him perform live.

We also watched a documentary on Netflix that was released in 2014 called "Glen Campbell - I'll Be Me". If you haven't seen this one, you need to do that! You know the sayings about "living your dash" - the dash between your birth date and the date of your passing. Glen Campbell lived that dash ~ authentically, fully, artistically, enthusiastically and completely. R.I.P Glen Campbell.

The End of Alzheimer's: The First Program to Prevent and Reverse Cognitive Decline
Buy Now 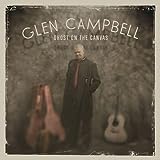 Ghost On The Canvas
Buy Now