Synopsis: With his wife's disappearance having become the focus of an intense media circus, a man sees the spotlight turned on him when it's suspected that he may not be innocent.

MPAA Rating: Rated R for a scene of bloody violence, some strong sexual content/nudity, and language

- The rest of the cast had good performances as well.

- The creepily sad background music, the atmosphere and filtered lens for the cinematography help create a dark serious movie that'll break your heart.

- The ending might be too disturbingly sad for some people to handle. 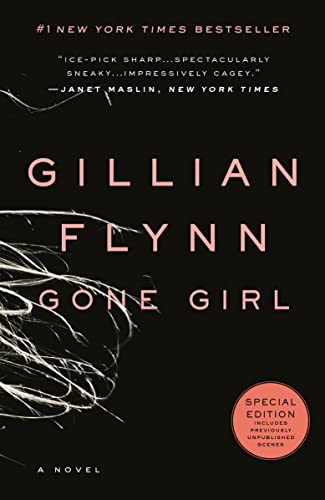 A movie unlike any other...

"Gone Girl" is a mystery wrapped in a question, while being harbored inside an enigma. And if you can even fathom what that means, then you might be ready to see arguably one of the most perplexing stories ever told on the big screen.

When we see the trailers for this movie, "Gone Girl" looks like another run of the mill drama about a man that's accused of killing his wife, after her mysterious disappearance. However, we soon learn that sometimes things aren't always what they appear to be, as "Gone Girl" doesn't settle for any of the cheap Hollywood cliches that one would expect.

Without giving away too much, I will tell my readers this much. Whatever you think is going to happen in this feature isn't going to happen. If anything, the ending is completely different than what you might expect; which makes it refreshing to watch because you never know where the story will take you next.

It's an elaborate mystery thriller that'll grab your mind with it's overbearing emotional story, but it'll shatter your heart with it's jaw dropping plot twist. .A story chalked full of surprises at every turn, while leaving you gasping for more. Whether you like "Gone Girl" or not, it's one of those rare films that'll stick with you long after you see it.

I would delve more into the plot, but it would give the film a great disservice, as part of the fun is the mystery itself. All you need to know about the plot is that it follows a man named Nick Dunne (Ben Affleck), who finds out his wife has mysteriously disappeared. After a series of events, Nick finds himself under public scrutiny by the media and police, as they start to suspect that Nick may have murdered his own wife. But is the story that cut and dry? Or perhaps there's more to this mystery than we're being led to believe? As I mentioned earlier, part of the fun is finding out for yourself, as this is one ending that you'll have to see to believe.

"Gone Girl" is based on a book by Gillian Flynn, and David Fincher allegedly changed ending of the story according to most sources, so I wouldn't count on reading the book to give you any spoilers either.

"Gone Girl" offers a deep psychological character study of a text book sociopath. A person that's out of touch with reality, but only wants to be happy. "Gone Girl" can be disturbing at times, but that's part of it's charm. Unlike most Hollywood movies these days, "Gone Girl" doesn't settle for any pointless cliches and tropes that most films rely on. No, "Gone Girl" simply tries to tell a great story. One full of twists and turns, to where you can never predict where it's going to take you. But one thing is for sure, you won't be able to forget the ride.

Rosamund Pike delivers a captivating performance that could make her a front runner at next year's Academy Awards. The layers of emotions Rosamund displays with her character is uncanny, yet provocative to watch. Ben Affleck has a solid performance as well. Although I hesitate to call this his best acting performance, but he manages to maintain just the right amount of vulnerability and compassion needed to carry the role.

Plus, Neil Patrick Harris delivers a spectacular performance as well. Granted, he doesn't have a huge role in the film, but he does add a lot of emotional depth to anchor the story whenever he does.

The filtered lens used in the cinematography along with the atmosphere, the sad background music, and visuals help set the tone to create possibly one of the most disturbingly engaging movies of all time. One minute, "Gone Girl" has you laughing at some of it's jokes about marriage, while the next it takes you on a ride that'll blow your mind once it comes to end.

David Fincher has proven before with such classics like "Fight Club" and "Seven" that he knows how to deliver movies that contain plot twists that'll blow your mind, and "Gone Girl" is certainly no exception. While I would still argue that "Seven" is still by far his best movie, "Gone Girl" comes pretty damn close.

If anything, I'll be very surprised if this film isn't nominated for "Best Picture" next year at the Oscars. Not only is "Gone Girl" arguably the best movie of 2014, but it's probably one of the best mystery thriller films ever made. If you're yearning to see an elaborate mind f***ing experience on the big screen, then "Gone Girl" is worth the price of admission. Grab a tub of popcorn, a cold beverage, and some candy because this is one experience you won't want to miss.