Greta Garbo was a Mysterious Lady immediately upon her arrival in Hollywood in 1926 and still remains to this day. To every moviegoer who has ever seen one of her films, she is the embodiment of a great actress. On the screen, she was a radiant beauty whose grace and style have not been equaled from 1926 until the present day. She was able to perform a scene, in more than one language, perfectly with minimum direction spontaneously. Even the greatest stars who worked with her behaved as though they were in the presence of a screen deity. John Barrymore, who worked with her in "Grand Hotel" said, "She is a great lady and a great actress and the rest is silence. Bette Davis, hardly ungifted or egoless herself, agreed, calling Garbo's work "pure witchcraft. I cannot analyze this woman's acting. I only know that no one else so effectively worked in front of a camera."

Greta Garbo was born into a family of severely limited means and she decided early on that she would rise beyond her situation. She always sought out a mentor, and her original teacher was Mauritz Stiller, a pioneer of the Swedish film industry. The screen presence of the eighteen-year-old actress led to him bringing her to the United States after he accepted an offer from Louis B. Mayer to direct for Metro-Goldwyn-Mayer. Stiller directed Garbo in the Temptress, but could not deal with the structure and rules of Hollywood. After repeated arguments with the MGM executives, he was replaced.

The enchantment of Garbo's eyes and voice have always been part of her mystery. Many of her movies focused completely on her facial expressions and minimized the presence of everyone she worked with. Clark Gable, an immense star in his own right, was a co-star in one of her films, Susan Lennox and the viewer barely noticed his character.

The evidence of Garbo's extraordinary acting continuously amazed and delighted the studio heads right from the beginning. In the silent film Flesh and the Devil, she has a scene with John Gilbert where she turns around the communion cup. She holds the cup with intensity, so as to drink from the place on the rim where her lover's lips have touched. Garbo was able to magically convert a holy rite into a sensual act, and at the same time deflect the possible objections of the sensors, by rendering the 'sin' almost impalpable.

Garbo became famous for many quotes on screen. Among them was "I have never been so tired in my life" in Grand Hotel. In The Mysterious Lady, a silent film about a secret agent who shoots her spymaster to save her enemy lover, she never appeared so tired on the screen. As she lets herself into her apartment she leans exhaustingly against the wall after she has shown her lover out. She again presses herself against the wall as if it were his body. No film so clearly shows that, for Garbo, passion was a form of tragic depression. The tiredness in her face is converted into romantic agony. The way some people turned calories into energy, Garbo turned the lack of them into love-sickness.

In another silent film, A Woman of Affairs she again projects her unmatched acting brilliance during a hallucinatory scene in a hospital when she is visited by John Gilbert while recovering from a nervous collapse. After he has been to her bedside, John Gilbert reports back to his wife that she does not know him. Suddenly Garbo appears at the doorway and walks towards the bouquet he has brought, seeing only the flowers, everything else being unfocused. Sweeping up the flowers, she presses them to her body like a woman with her lover, plunges her face deep into them, and while inhaling strength from them brings the bouquet back to her room close to her cheek like a new-born baby.

In Queen Christina Garbo perfects perhaps her best artistic performance, She is very devoted to her country and the welfare of her people. She wants to do what is best for her people but along the way falls in love with a Spanish envoy "Don Antonio" played by John Gilbert. She is torn between her country and her lover. In a bedroom sequence, with an opera background, Garbo moves around the room, touching the objects in it as if each were a trysting place in Eden. Gilbert watches in half-amused perplexity as she uses her hands like a divining rod, caressing the walls, turning the spinning-wheel, sliding over the bed and pressing her face to the sheets and blankets as if they were her lover's body, then wading across the huge bed like a snowdrift to press herself up against the bedpost in as near a climactic rapture as Hollywood would allow in those days. When the music stops she moans "I have imagined happiness but the happiness you cannot imagine" What makes her performance in this scene so breathtaking is how she plays the scene for sorrow as well as joy. The words "In future in my mind I shall live a great deal in this world" relay a brooding undertone of someone preparing herself, amidst inexpressible joy, for certain loss and loneliness.

In most of her roles, Garbo played the female victim that either lost her lover or her life as in Mata Hari, Anna Karenina, and Camille, however, the critics were always defining her as a one-dimensional artist who could only play a tired and melancholy soul. This changed when she was cast in the Ernst Lubitsch romantic comedy, Ninotchka. Because it came out in 1939 it barely had a chance to thrive due to the overcrowded list of classics that played in theaters that year. Gone With the Wind, The Wizard of OZ, Of Mice and Men, Dark Victory, Stagecoach, Wuthering Heights, Mr. Smith Goes to Washington, and Goodbye Mr. Chips were just some of the great movies that were playing. During that highly competitive season, Ninotchka held its own by receiving four nominations. In Ninotchka, the Garbo myth was debunked with the newspaper headline "GARBO LAUGHS". A very keen example of Garbo's acting prowess in eliciting a viewer's emotion while perfecting a scene, occurred when her costar Melvyn Douglas teased her with being jealous of the grand Duchess whose picture sat in his study. Garbo appeared to pull back shyly from him, flicking her amazing eyelashes down like power switches, and uttered a tiny, tremulous, girlish admission of "Uh-huh" That is all "Uh-huh". That scene by itself defined the depth of character that Garbo was capable of creating by waving her magic wand over the scene to create emotion.

Greta Garbo unknowingly ended her career in 1941 after her role in Two-Faced Woman came under harsh criticism by the Roman Catholic Church's National Legion of Decency. They deplored the plot where a man appears to flirt with his wife's sister. They described it as "Un-Christian towards marriage ... dangerous to public morals ... salacious costumes" Garbo had never gotten used to such piercing criticism. In addition to this, it was December of 1941, and Pearl Harbor had just been bombed and America was in the war. She deplored all types of violence and decided to take a step back from making pictures when she said "In this harsh new world there is no place for me anymore" She had no intention of retirement, but the failure of Two-Faced Woman made her exceptionally obsessively careful about committing herself to a picture. Many suggestions were made and she analyzed each one with the suspiciousness she had long applied to life in general. Like life, so with a script, Garbo was not willing to take a risk on it.

Years after she left films Greta Garbo was as mysterious to the public as she was during her career in Hollywood. She lived in New York which she loved for its harbors and similarities to her birthplace Stockholm, Sweden. She didn't really care for admirers, whom she called customers, and maintained her secrecy by walking the streets basically dressed like a man in dark clothing and sunglasses.

During her acting years, it was ironic that her wariness of the spotlight only made her that much more appealing to the media. "I feel able to express myself only through my roles, not in words, and that is why I try to avoid talking to the press," she once said during a rare statement to reporters in a plea for privacy. She was frequently harsh on herself saying "I'm better off alone because I happen to be a human being born with extremely thin skin and that's not very good in this world - not good or not easy. I'm not in the movies for many, many years. I'm not worth anything to anybody. Why do they harass me?". She was also very philosophical by nature. Perhaps the quote that many of us would like to remember her by was "What's Important is that whenever you meet your fellow man, you're kind and you're decent. The main thing is if you are a decent human being - that's what counts, because if there aren't such people, then there's no hope for the world."

Walking With Garbo: by Raymond Daum

Garbo: A portrait by Alexander Walker

Greta Garbo Flesh and the Devil 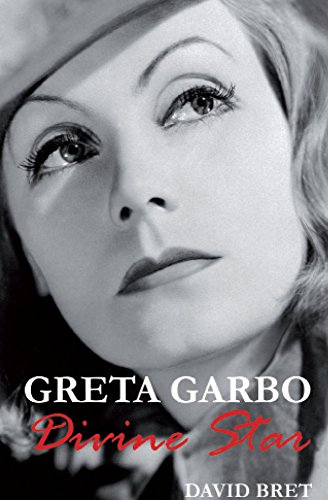 What Was Your Favorite Greta Garbo Movie