Bad and Annoying Habits that People have

Inspired by Shadesbreath's recent Hub, http://hubpages.com/hub/For-the-love-of-God--People--Ridiculous-has-no-E-A-rant-that-could-not-be-helped I feel compelled to add my own rant to the Hub list, and fully expect many of you to have further contributions to make once you have read this.

There are so many habits people have that truly get on my nerves, to the point of feeling myself gritting my teeth in frustration, and often having to bite my tongue to stop myself automatically correcting them. To make this easier to read I have broken the habits down into categories as follows:

This is my personal particular phobia, and to list but a few here goes:

2) People who pronounce the letter H, as being 'haitch' instead of 'aitch' as it should be. They seem to feel a need to sound the letter at the beginning of saying it, even though this is totally wrong and makes me want to drag them round the room by various parts of their anatomy until they pronounce it the right way.

Another truly annoying one, much as in Shadesbreath's Hub, especially when the words are either pretty simple to spell, or there are two possible spellings meaning different things, yet they use the wrong one every time.

1) 'Rediculous' instead of 'ridiculous', (thanks for that one Shadesbreath, great example).

2) When people are referring to 'Coarse Fishing', but spell it as 'Course Fishing', inferring that the angler is heading off on some kind of fishing education course.

I Judge You When You Use Poor Grammar: A Collection of Egregious Errors, Disconcerting Bloopers, and Other Linguistic Slip-Ups
Buy Now

These are the habits when I seriously doubt the person is even aware they are doing it.

1) In Guernsey the true locals have a habit of saying "Ay" at the end of every sentence, e.g. 'I went to the pub today Ay! It was great Ay! I saw John in there and he a new job Ay!' The result is that every sentence seems to require an exclamation mark at the end of it.

2) People who unnecessarily swear throughout their sentences, usually using pretty strong swear words, e.g. The Bus Driver I used to work with who must have used the F**k word at least three times in every sentence he spoke. This became truly distracting, as you found yourself wondering how many more words he would get through before it reappeared, so you missed out on whatever it was he was actually talking about.

A second example of this was a London guy who fished at our lake a few days back. Nice guy, but called everyone a 'C*nt' every other sentence. A bit of an odd experience when the first thing a guy says to you upon speaking to you is, ' You alright C*nt'. One of our anglers was laughing about it and said this guy had called him a C*nt about four times in ten minutes.

3) Old people who insist on "tutting" in a disapproving way whenever they feel they have the moral high ground. This is usually quickly followed by pursed up lips. Examples of this behaviour can be seen when elderly people see a group of children simply playing in the street, or when they watch a TV programme that might have a few swear words in or images of nudity. 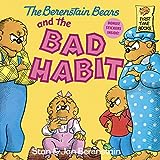 The Berenstain Bears and the Bad Habit
Buy Now

You know the ones, habits people have that are distracting, annoying or downright repulsive.

1) Nose picking, especially if they eat it afterwards. Makes me want to vomit, and the fact they are doing it in public is even more worrying.

2) Men who can't stop playing with their groins, treating their willy as some kind of Comfort Blanket.

3) Nail biting. I am guilty of this one myself, but still hate it when I see other people doing it, especially when they seem so determined to rip the nail off, that they are virtually dribbling in their efforts.

4) Snoring. Yes I know this one is unavoidable for many people, but if you have ever tried to get to sleep next to a heavy snorer you will know how close you come to whacking them over the head with the nearest baseball bat just so you can finally get some sleep.

5) People who read over your shoulder, especially newspapers or emails you are typing, really off-putting and considered pretty rude behaviour.

6) Bosses who watch over your shoulder whilst you are typing a letter for them. If one thing is guaranteed to cause you to make mistakes, and your fingers to turn into hopelessly out of control lumps of jelly, it is being watched so closely.

7) People who interrupt you mid-sentence and start talking about something completely different. This is not only enough to make me want to choke them, but it is also very insulting, as it shows they were clearly not interested in your conversation, or not listening to a word you said.

8) Men and women, (but mainly men), who can't stop fiddling with their mobile phones, changing the settings or generally going through the functions. I call it 'a man's spare penis', as if he can't, or won't play with his bits in public (see point 2 above), then the phone seems to be the next best alternative.

9) Continuing to get pregnant multiple times when surviving off benefits that the workforce pay taxes to finance. An example of this is a couple here on Guernsey who now have 13 children, and the woman is pregnant again. Neither of them work, as he claims he needs to be home to help her cope with all the children, and that he is overqualified for most jobs he is offered. They live in a Council House, drive a huge virtually new vehicle (to hold the many children), must be earning thousands in benefits every month because each child they have produces yet more revenue for them. Her excuse for behaving like a sausage factory is simply, 'I love kids'. What also annoys me is the lack of thought for the kids she already has. When asked if they would have lots of children when they grew up, virtually all of them said no, as they hated the fact they ended up looking after most of their siblings because of the size of the family. In addition to this there are the moral repercussions, such as the drain on the planet, and how all of these children will grow up to need homes of their own, electricity, jobs, cars etc.

10) Men who hog the TV remote, and even when they doze off in the chair they manage to maintain a firm grip on it. If you gently try to prise it away from their snoring body, they immediately wake up and claim they were watching whatever the programme on TV was at the time.

I am sure I have missed of loads more habits that will come to me over the next few days, but please feel free to add your own personal favourites to the comments section as I am sure many of them we will have in common.