I've been into hip hop music and culture since my teens back in the early 1980s. I've seen it go through many changes, bumps, and curves.

So, in the late 80s, MTV picked up on the significance of Hip Hop music and initiated a show dedicated to cursory interviews and full-fledged Hip Hop music videos. The show was called "Yo! MTV Raps". MTV's insightful choice for VJ was the legendary graffiti artist and Hip Hop music liaison, Fab 5 Freddie. He was already famous in Hip Hop circles as a very talented graffiti artist and cultural link between Hip Hop and Punk and New Wave worlds. He had signature style, with his cool shades, flat top hat, and gold jewelry.

The show was inaugurated with appearances by such Hip Hop superstars as Fresh Prince and Jazzy Jeff (with their Overground comic relief and party tunes) and Run DMC. It should be noted that an alternative show was later created which was hosted by the entertaining and comic pair, Dr. Dre and Ed Lover. This is the Dr. Dre from East Coast underground crew, Original Concept, not the Dr. Dre who is the ground breaking West Coast Gangster Rap producer, DJ, rapper from NWA, who later went on to produce the work of the innovative and deft rapper, Eminem; hard to find the music of Original Concept nowadays, but I can tell you, they were a genuinely incredible underground Hip Hop group. Needless to say, MTV execs did a good job of picking the right line up for their Hip Hop ventures.

The late 80s was an interesting time in Hip Hop, mainly because of the diversity of the music. If I were to categorize, to make it easier, I'd group the music of that time this way: Gangster Rap, Hippy Rap, and Political Rap. It would be good to illustrate how this came about chronologically.

Three artists broke onto the Hip Hop stage, who were fascinating and innovative composites of rough and cutting-edge, and political. They were: Ice T, Boogie Down Productions (with KRS ONE), and Public Enemy (with the charged baritone of Chuck D and the flamboyance and frenetic energy of Flava Flav, backed up by the security-dance unit, the S1Ws and scratches by Terminator X). These acts were ground breaking and innovative and continued to evolve. Ice T's album, Rhyme Pays, was a unique combination of gangster tales and political and social commentary. Boogie Down Productions was headed by KRS ONE (acronym and graffiti tag, standing for Knowledge Reigns Supreme Over Nearly Everyone) and the late DJ Scott La Rock. Scott was shot dead while trying to intervene in a dispute in which a crew member, D-Nice, was entangled. Criminal Minded was filled with underground stories of shoot outs with drug dealers, rock-infused jams, commentary on the human mind, as well as political commentary. One thing that distinguishes KRS ONE's approach and lyrics is that there is always an exploration of the human mind in it. Interestingly, KRS ONE's nick-name while he was homeless at a shelter in New York City, was Kris--because of his association with local Hare Krishnas. 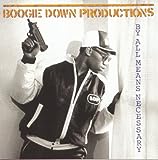 By All Means Necessary
Along with Public Enemy's It Takes a Nation of Millions, Boogie Down Productions, and lead lyricist KRS ONE, ushered in the conscious rap elements of the Golden Age of Hip Hop with By All Means Necessary. Very political, with a story-teller sensibility that goes along with KRS-ONE's penchant for teaching on the mic, this album broke the mold and set the trend for conscious rap at Hip Hop's height of popularity in the late 80s. Another true classic from back in the day.
Buy Now

Public Enemy stands out because of their in-your-face presentation, with Chuck D's commanding, deep, tear-them-to-shreds voice; Flava Flav's hyper kinetic air of surreal reality; the back up security-dance crew, the S1Ws, in military garb, led by the controversial figure and martial artist, Professor Griff; and the mysterious DJ work of Terminator X (he never talked). In actuality, production of the music was created by the four man team of Hank and Keith Shocklee, Eric Sadler, and Carlton Ridenhour, Ridenhour actually being Chuck D. Additional help was provided by Flava Flav's talent with various musical instruments. The music has been described as "anti-music" with irritating whistles and buzzes, indistinguishable from white noise or noise pollution; and beautifully done: The point was to get under the skin, with the deeper and urgent message about the deterioration of the black community which had been brought about by genocide and slavery, drug infiltration of the community and mental abuse and confusion. The phrase that best describes the music is, as I said, "in your face". The delivery was incomparable. 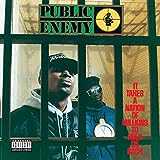 It Takes A Nation Of Millions To Hold Us Back [Explicit]
It Takes A Millions was Public Enemy's ground-breaking album with innovative beats and politically-driven hard-core lyrics, led by the booming voice of Chuck D and the comical antics of Hip Hop favorite Flava Flav. This album is a true Hip Hop classic.
Buy Now

Strangely, because these acts became more socially conscious, these were the beginnings of Gangster Rap. But while Ice T, KRS ONE, and Public Enemy really used gangster subject matter to springboard into deeper and more relevant issues, other groups jumped on the scene with more consistent and heavier emphasis on gang culture. It was compelling, to say the least.

Next time we will explore the development of what became known as Gangster Rap.