Yogi Bear (named after Yankees catcher Yogi Berra) and his pal Boo-Boo, a small bear with a bow-tie (voiced by Don Messick) live in Jellystone Park (a parody of Yellowstone), trying to outsmart campers for their “pic-a-nic” baskets, while avoiding the park ranger. Yogi is often the schemer, plotting out tricks and causing trouble for campers, while Boo-Boo is the level headed one who always tries to obey the rules.

The initial shorts that appeared on the Huckleberry Hound Show proved popular, very popular; Arguably Yogi Bear was becoming more popular than the headlining act. It soon became apparent to Hanna-Barbera that Yogi Bear was meant for bigger and better things than sitting in the back third of another character’s show. After two seasons, Yogi Bear was pulled from the Huckleberry Hound Show and replaced with another similar character, Hokey Wolf, as production was advanced upon a spin-off series.

On January 30, 1961, The Yogi Bear Show made its debut in syndication. Like with Huckleberry Hound and Quick Draw McGraw, Yogi Bear was sponsored by Kellogg’s, primarily pushing their “OK’s” cereal (which was similar to Cheerios, but with K shapes included). Whereas other spin-off programs of back-up segments, like the Dudley Do-Right Show, would be made up of reruns of older programs, Hanna-Barbera knew the best way to draw viewers in would be to make entirely new episodes from the get-go.

Yogi Bear’s new shorts were fundamentally the same as his Huckleberry Hound shorts. Yogi was still the “smarter than the average” bear looking for pic-a-nic baskets from campers, while Boo-Boo was still the voice of reason being dragged into Yogi’s schemes.

There were a few differences however; in the older shorts, the park ranger (voiced by Don Messick) was a nameless older man with a mustache. In the Yogi Bear Show, this character became Ranger Smith, a former soldier who now works as the stern authority figure of Jellystone Park. Ranger Smith likes Boo-Boo because he always does the right thing, but has a back-and-forth relationship with Yogi. Sometimes he feels sorry for Yogi and tries to steer him back on course, but in other episodes he wishes Yogi would leave the park and go to a zoo.

Another addition was the character of Cindy Bear, Yogi’s on-again off-again girlfriend. Voiced in a southern accent by actress Julie Bennett, she was much more laid back, almost never getting involved in Yogi’s schemes. Most of the affections between her and Yogi came from her while Yogi tries to avoid her, but he sometimes displays affections back.

The Yogi Bear Show was, naturally, another three-act package show. To fill the other two segments, Hanna-Barbera took two minor characters they had introduced the year before in The Quick Draw McGraw Show, a small blue duckling and an orange lion named Snaggletooth. Changing their colors (to yellow and pink) and renaming them (to Yakky Doodle and Snagglepuss), they were remade as Yogi Bear’s back-up acts.

Yakky Doodle earlier originated from two separate pre-existing characters. The first was Quacker, a small yellow duckling from Hanna-Barbera’s Tom & Jerry shorts who made his debut in the 1950 short “Little Quacker”. Unlike Tom or Jerry, Quacker spoke a lot, using a voice similar to that of Donald Duck.

The other character was Webster Webfoot, a duck puppet created and performed by Jimmy Weldon when he was a disk jockey in Texas, and went on to be a character for childrens programs on various local stations in Oklahoma, Texas, and California. In the early 1960’s, Weldon was performing with Webster Webfoot on KJEO-TV in Fresno, California, when his duck voice caught the attention of Hanna-Barbera, who hired him for the role of Yakky Doodle.

In his cartoons, Yakky Doodle has a tendency to go into danger, being overly trusting of people. His only protection is his best friend Chopper the bulldog (voiced by Vance Colvig, KTLA-TV’s Bozo the Clown), who tries his best to save the little duckling from being caught by villains such as Fibber Fox, Aify Gator, and “The Cat”, who all wanted to eat Yakky, whether raw or cooked as a gourmet meal. Yakky Doodle’s trio of villains were all voiced by Daws Butler; Fibber Fox and The Cat were both impressions of comedian Shelley Berman, while Aify Gator was an impression of Alfred Hitchcock.

The third segment of the Yogi Bear Show was Snagglepuss, about a pink lion who, while he was civilized, lives in a cavern and is often misunderstood to be a wild beast. This mistake causes Snagglepuss to be tracked down by Major Minor (voiced by Don Messick), a small hunter. Often their chases were reminiscent of encounters between Bugs Bunny and Elmer Fudd, a connection made all the stronger by the show’s main writer Michael Maltese, who was a writer for Warner Bros during the 1940’s.

Snagglepuss’ voice, performed by Daws Butler, was strongly connected to that of Bert Lahr as the Cowardly Lion in MGM’s 1939 classic “The Wizard of Oz”. So strongly, in fact, that many mistook Butler’s impression for really being Lahr, causing a lawsuit by Bert Lahr towards Hanna-Barbera over the Kellogg’s commercials Snagglepuss appeared in. Later commercials would include a voice credit to Daws Butler, something rarely done in commercials, so as to not confuse people.

What Snagglepuss is probably best remembered for was his various catchphrases, such as “Heavens to Murgatroyd!”, “Exit, stage left!”, and adding the word “even” to the end of certain sentences. “Heavens to Murgatroyd” in particular was also borrowed from Bert Lahr, who uttered that phrase in the 1944 film “Meet the People”.

The Yogi Bear Show lasted two seasons with 33 episodes total, ending with the half-hour episode “Yogi’s Birthday Party”, airing on January 6, 1962. This episode guest-starred the full casts of the Huckleberry Hound, Quick Draw McGraw, and Yogi Bear shows. While The Quick Draw McGraw Show would last a bit longer (until October of that year), the Huckleberry Hound Show had finished a few months earlier; In a way, this half-hour episode was a send-off to Hanna-Barbera’s early years as a television studio.

Just five short years earlier, Bill Hanna and Joe Barbera were laid off by MGM. When they tried to break into television, some laughed and thought it ridiculous to put so much faith into television animation. But thanks to Huckleberry Hound, Quick Draw McGraw, and Yogi Bear, the duo had validated television as an avenue for cartoon production and climbed their way up. And with the debut of The Flintstones, they were no longer the small fish in the big pond, but rather one of the big fishes; Itt was time to let go of their early pioneering series and move onward towards an expanding horizon.

Meanwhile, thanks to the success of the Flintstones, ABC approached Hanna-Barbera about making a second prime-time series. While with the Flintstones they elected to go with relatable human characters, this second series would follow H-B’s typical talking animal formula, except as a half-hour program with no supporting shorts.

Top Cat’s gang also included the alley cats Spook, Brain (both voiced by Leo deLyon), Fancy-Fancy (voiced by John Stephenson), and Choo-Choo (voiced by Marvin Kaplan). They were very much inspired by the characters of the 1940's movie serials "The East End Kids", with some hints of "Guys & Dolls" (such as drawing inspiration from that musical's "Nicely-Nicely character, in both name for Fancy-Fancy/Choo-Choo and in personality for Benny). The #1 foil in their schemes is Officer Charles Dibble, an NYPD beat cop (voiced by Allen Jenkins) who has a similar relationship with the alley cats as Yogi Bear has with Ranger Smith: Officer Dibble doesn’t want to punish the alley cats and respects them on some level, but at the same time is forced to assert his authority and attempt to evict them from the alley when they get up to their schemes.

Top Cat premiered on ABC on September 27, 1961, running Wednesday nights at 8:30pm. It too was sponsored by Kellogg’s, though it additionally had Bristol-Myers as a sponsor. It can arguably be said that, after six series, Hanna-Barbera had finally missed the mark: Top Cat did very poorly with primetime audiences and was quietly removed from ABC after a single 30 episode season. The show was reran for a season on ABC’s Saturday morning block between 1962-1963, and then for several seasons on NBC between 1964 and 1969.

However, at the same time, if one looks at how well Top Cat did internationally, it’s difficult to say that it was a failure. In the United Kingdom, where it aired as “Boss Cat” (due to a conflict with a UK cat food brand named “Top Cat”), it was possibly the most rerun Hanna-Barbera cartoon, running on network television well into the late 60’s.

But it was Latin America (where it was titled “Don Gato y su pandilla” or “Mr. Cat and his gang”) where it gained the most popularity, becoming as popular there as The Flintstones. Its success in Spanish-speaking markets is often attributed to the voice acting of the spanish dub, which featured many popular spanish voice actors and excellent voice direction.

The Bear and the Cat

Yogi Bear, while his own show lasted a shorter time than Huckleberry Hound and Quick Draw McGraw, actually became a central part of Hanna-Barbera’s history, his cast of character becoming just as prolific as the Flintstones. He would go on to be a major character in 9 additional series, six of which had his name in them, as well as numerous TV movies and specials. In 1964, Yogi Bear became the first Hanna-Barbera character to get his own film, titled “Hey There, It’s Yogi Bear!”. Most recently, Yogi Bear starred in a live-action/CGI film in 2010 with Dan Aykroyd as Yogi.

Top Cat, on the other hand, hasn’t appeared nearly as much since. He made a guest appearance in “Yogi’s Ark Lark” in 1972, as well as having a recurring role in “Yogi’s Treasure Hunt” in 1985. In 1988, Top Cat got his own TV movie, “Top Cat and the Beverly Hills Cats”. Most recently, thanks to Top Cat’s enduring popularity in Mexico, he’s received two theatrically animated films, the first of which, “Top Cat: The Movie”, is currently on Netflix in the US. The second, “Top Cat Begins”, is set to be released in Mexico in October 2015. 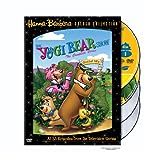