Lana Turner was born Julia, or "Judy" Turner, in Idaho in 1921, She was the only child of teenaged parents, her father was 18, and mother was 16, who separated whens she was only 3 years old. However, before they separated, they moved to San Francisco, due to financial difficulties that steepened throughout the country after FDR was elected president. The depression was in full swing. in 1930, Lana's father took to gambling out of desperation, and won some money in a game of craps. He had placed his winnings in his sock and hours later his body was discovered lying in the streets with his left shoe and sock removed.

Lana's mother, Mildred, developed serious respiratory related health problems around the same time, and was advised to move to a drier climate. As fate would have it, she took her daughter to Hollywood where she got a job as a beautician to support herself and her daughter, and Lana was sent to public schools.

Lana Turner was soon a highly independent, and free - spirited Love Goddess in Hollywood's golden age. She was fortunate to have been discovered while she was still attending Hollywood high. The famous story goes; Lana Turner, a strikingly beautiful teenager was discovered by an MGM talent scout just sitting pretty on a bar stool at her local soda fountain, Schwab's Pharmacy, the story led to numerous beautiful young hopeful starlets spending hours at Schwab's waiting to be discovered. Lana was only 16 years old when MGM signed her to a contract. This was in the days when stars were signed to a contract and paid a regular wage. In other words, it did not matter if Lana was cast in anything at all: the studio paid her simply because she was under contract. This meant that Lana could wander the studio lot and take voice lessons at the voice training school, she could then take dancing lessons by the MGM dancing teachers and see a drama coach to develop her talents, all while waiting to be cast in a movie or short subject. It was a fantasy come true for any teenager, and Lana, who adored her mother, vowed to her that as soon as she gained some leverage, she could quit working at the beauty salon.

Lana was given a memorable part in a movie, They Won't Forget, in which she looked sexy walking down the street. Her part was not a big one, but because she looked so pretty, and her character was murdered; it became a very big way to crash into pictures. She was then quickly cast with in the Andy Hardy series with Mickey Rooney. Her career was moving along at a rapid pace, but her sole hobby was men. Lana had her pick of the litter and thoroughly enjoyed her stardom with the many opportunities it brought her in life. She told her mother to quit working, and added, "you will never have to work a day in your life ever again." Mildred did, however, act as personal manager to her daughter, and Lana also took on the full support of her grandmother, on her mother's side. Mildred was living the dream that all single mom's dream of.

During the late 1930s and the entire decade of the 40s Lana Turner as the ultimate pin up girl. She was beautiful, cast in glamorous movies, such as The Ziegfeld Girl, and quickly broadened her appeal by appearing in, Dr. Jekyll and Mr. Hyde, and then her classic move into film noir in The Postman Always Rings Twice. Lana married Artie Shaw in 1939, the union barely lasted two years, so Lana, never one for wasting any time, dated some of the most exciting movie stars before being swept off her feet by Stephen Crane in 1942. It was a clumsy union in which Stephen had lied about his position in order to get Lana to marry him. Lana divorced him in less than one year. but, she discovered she was pregnant. The two married again, but the bond only lasted two years, only they now had a daughter named, Cheryl Crane.

Lana continued to pursue her hobby, dating many of her leading men and then marrying twice more; once in 1948 and another time to Lex Barker in 1953; they divorced in 1957. At this point in her life, she had been a major heart throb, earned top dollar as a movie star, dated the most exciting men in Hollywood, had her mother well provided for, and was justly proud of her 14 year old daughter, who was reaching that age that she had been when her life had turned around so remarkably. She herself was only 36, but, she had crammed more life into her 36 years than most people cram into 80. Lana was now in no hurry to rush down the isle with someone else. She wanted to relax, enjoy her wealth, fame and family. Lana had been a movie star since 1937, and by 1957, she wanted to relax, and smell the roses. for almost 20 years Lana had been a bread winner who supported both her mother and grandmother lavishly. Because of the hard work and burden of supporting her family Lana had always played hard to let off steam, having been married four times (8 times by the end of her life), and dated many. Lana was lived large and called all the shots in her life.

Lana Turner reinvented herself very well, In her teens she had pretty and innocent, but by her mid 30s Lana was in control of her career and life. She knew that she could still attract the best quality men and was not willing to settle in any way. She was wise to the cheap liars who wanted to ride her coat tails. Lana could easily be drawn to a handsome hunk for fun and the thrill for her ego to receive its regular fix, while confirming that she was still as desirable as ever to young good looking men, however, for Lana to take a man seriously he needed to have something substantial to offer.

She did not want merely a boy toy to drag around, Lana liked a man who could provide something for her, whether it be a successful business man of tremendous wealth, a director who could be instrumental in furthering her career. A dashing movie star would certainly do, but on the same or higher level of stardom as she. Lana Turner was a totally feminine woman who wanted a man she could look up to.

Detour; Written by Cheryl Crane; The story of Johnny Stompanato and Lana Turner 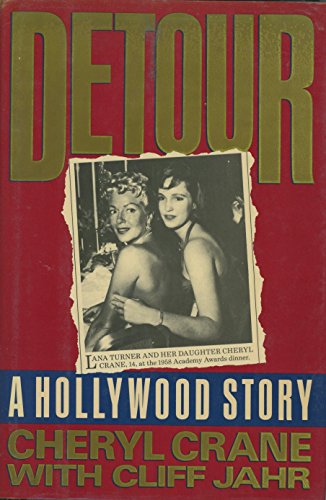 It was 1958 and Lana had just divorced her fourth husband, Lex Barker. Turner was now older and wiser, and she understood that her stardom was a major attraction for many men who were not doing very well. She was not about to marry a guy just because she had found him attractive and had taken him for a lover. Something Johnny Stompanato had to understand.

Johnny Stompanato owned and managed a gift shop outside of Los Angeles. When he charmed Lana Turner, he decided that his ship had come in, and he had every intention of marrying Lana and having his way with her money, while at the same time, making a big name for himself in show business. Stompanato had plans of his own, he was not going to be just another gigolo of Lana Turner's, and he fought with her often about making an honest man out of him. When they first met, Lana found him handsome and interestingly dangerous. He was known to have mob connections, and associated with mobsters of the time, such as Mickey Cohen.

Lana's 14 year old daughter, and often overheard Johnny threatening her mother stating, "I will cut your face up and ruin your career." Lana had been trying to dump the troublesome Johnny for a few months now and Stompanato was becoming irate. Stompanato had run his course with Lana, as far as she was concerned, and she wanted rid of him.

Lana was all set to attend the Oscars for Peyton Place, and Johnny wanted to go along and be seen publicly as Lana Turner's fiancé. Turner refused to deepen their relationship by bringing Johnny along, and attended the Oscars with her mother and daughter.

When Lana and her teenage daughter arrived home after a thrilling evening at the Oscars, Johnny barged in and fought with Lana in a chilling way that scared Cheryl enough to try to gain some power over her mothers tormentor by running to the kitchen and grabbing a butcher's knife. When Cheryl saw Johnny her adrenalin kicked in and she stabbed him. Johnny died shortly after.

For many months after the incident, newspapers were printing exaggerations of the truth and some purely made up stories of how Lana killed Johnny and told her daughter to take the heat for it. There were lawsuits against Lana by the Stompanato family, a manslaughter trial, and juvenile hall for Cheryl Crane. In the 1980s Cheryl Crane wrote an Autobiography and for the first time presented all the details of Good Friday 1958.

The Body of Stompanato After the Stabbing

Lana was all set to attend the Oscars for Peyton Place, and Johnny wanted to go along as Lana Turner's fiancé. Turner refused deepen their relationship and bring Johnny along, and ended up attending the Oscars with her mother and daughter.

When Lana and her teenage daughter arrived home after a thrilling evening at the Oscars, Johnny barged in and fought with Lana in a chilling way that scared Cheryl enough to try to gain some power over her mothers lover by running to the kitchen and grabbing a butcher's knife. When Cheryl saw Johnny her adrenalin kicked in and she stabbed him.

For months after the incident, newspapers were printing exaggerations of the truth and some purely made up stories of how Lana killed Johnny and told her daughter to take the heat for it. There were lawsuits against Lana by the Stompanato family, a custody battle between Cheryl's biological father and Lana, and juvenile hall for Cheryl Crane.

It took 20 minutes after Lana Turner's testimony to come to the verdict of justifiable homicide.

In the 1980s Cheryl Crane wrote an Autobiography and for the first time presented all the details of Good Friday 1958.

More Articles from The Glory Days of Hollywood