Organ Transplants In the Future: Can Organs Be Repossessed?

Repossessed. Where Is It!?

Several years ago, a friendly neighbor of ours woke up one morning, prepared to go to work and, stepping outside her front door, found that her car had vanished.

She reported it stolen, but learned later that day, that her vehicle had been repossessed. She had forgotten to make a payment. What was she to do?

At the time in our state, if one were only one day late on any automobile payment, the car could be repossessed anytime during the term of the loan, all the way up to the last day before the loan was paid completely. Some people worried about this.

While last-day repossessions were a rare occurrence, the car in question above was repossessed for the more usual reason: a sizable backlog of overdue payments.

What if,the future of transplants and 3D printer organs, this repossession happened with expensive organ transplants and substitutes purchased on the installment payment plan?

Black market human organ sales are real. They are becoming a growing underground market that should be considered seriously as a crime and health problem worldwide. 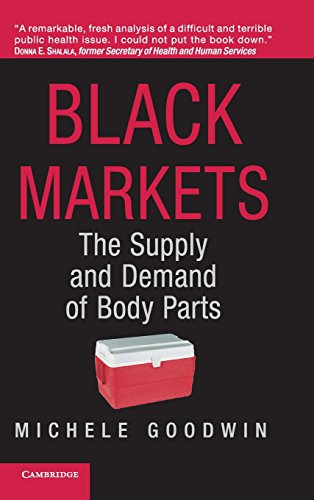 Black Markets: The Supply and Demand of Body Parts
I learned about black market organ in the late 1980s when a Las Vegas newspaper reported that a woman was found dead in a hotel bathtub, her kidneys missing. I was in Las Vegas at the time and saw related news footage.This books tells the full story of black market organs.
Buy Now

Hearts and Car Parts All for Sale

Black market human organs are sold at high prices for transplantation, becoming a large segment of both the concierge medicine phenomenon and the trafficking problem worldwide.

The April 2010 issue of Discovery magazine addresses these developments in an illustrated article on a black market kidney operation.

Day workers on the Indian Subcontinent are routinely approached about selling a kidney and many do so, However, many willing individuals do not receive the sum promised -- The doctor in charge becomes rich.

Artificial computerized organs are on the near horizon of legal industry; but at the same time, new organs can be grown via the application of powdered pig tissue in a matrix called ECM, extracellular matrix.

ECM works as well with senior citizens as it does with children and is easier to use than stem cells as of 2016.

Meanwhile, in places such as parts of the Midwest - notably Ohio- prostitutes and the homeless have been found dead in dumpsters, with organs hastily removed. I witnessed this myself in Las Vegas in 1986, when a body was found in the bathtub of a high rise hotel during my stay.

What if all of these stem-cell, pig-powder, and even 3D printed organs could be repossessed in the same way as automobiles, but with more bloodshed?

I Owe My Soul to the Company Store, From "16 Tons"

The topic of credit and conspicuous consumerism has been addressed before in various media.

For example, a Sliders television episode involved an elevated shopping mall in which workers were slaves to the mall administration, because their credit accounts (like the old coal mining "company store" bills) could never be paid off in one lifetime. They had to work in the mall until their dying day.

In Repo! The Genetic Opera, artificial organs are needed and purchased on credit, because of a public health epidemic that destroyed biological organs in organ banks. Most of these patients were never able to pay their bills completely. The organ company GeneCo runs an opera company where indebted patients perform as a requirement.

In Repo Men, the Credit Union or just "Union" sells "artif-orgs" at outrageous prices and 19% or more interest to a captive crowd that does not take care of its health, but still wants to live on and continue to over-consume.This is racketeering we see many obese patients eating shopping bags full of fast food after receiving new organs and it's all pretty disgusting.

Not too distant in our 21st Century, we've developed the high-tech miracle of artif-orgs, computerized mechanical body parts. Now you can live forever!

Almost indestructible, artif-org artificial organs, are jaw-dropping Borg® parts of metal and plastic, untouchable by cancer, diabetes, and heart disease. But if you don't pay up, the Credit Union will track you down and repossess them. This novel is twisted: The best Bio-Repo Man in the game finds his soul when he loses his heart and goes on to some other type of existence.

A barrel of controversy concerns artificial human organs sold at cut-throat prices in shopping malls by sales professionals at the "crooked used-car salesman" level of ethics.

Another keg of controversy concerns an alleged too-close approximation of it to another film. This previously released film is Repo! The Genetic Opera. As Count Floyd of SCTV would say - It's real scary, Kids!

How Good Are the Films?

Repo! The Genetic Opera, with Paris Hilton, is a separate work from Repo Men, being a rock opera as opposed to a science fiction/fantasy film.

However, some viewers and critics denigrate Repo Men for being a bad copy. This does not seem correct -- While both productions feature a company that deals in artificial organs and repossession agents, the story lines of the films are not alike. In addition, Repo Men does not force clients to sing opera on a Rocky Horror stage.

Repo Men is over the top, but engaging and provocative; and the ending is so surreal that I found it difficult to look away. The ultimate transplant, we learn, is a world of dreams. Repo! and Repo Men both have the flavor of Tim Burton's work in Nightmare Before Christmas and Batman with Michael Keaton and Jack Nicholson. In fact, Jack's Joker could show up in Repo! and never be noticed among the throng.

Repo! is described by some critics as a Rocky Horror Picture Show, but is is not -- Bruce Kirkland of Jam Movies reviewed it as

"Repo! is a bloody grotesquerie, not a delicious delight as was Rocky Horror."

Rob Humanick of Projection Booth likened it to what Christ must have experienced in the three days in hell between crucifixion and resurrection.

At the same time, many critics hated Repo Men. However, critic Roger Ebert, a survivor of multiple surgeries that have left him voiceless and unable to eat, but still happy, says, "Repo Men makes sci-fi's strongest possible case for universal health care." Plus, he found the film funny.

A third controversy involves style of delivery in film and book. The "mambo" referred to in the Repossession Mambo of the two book versions by Eric Garcia is the phenomenon described by Jude Law's repo man character Remy: the iconic writhing and thrusting into the next world that patients perform as their artif-orgs are forcefully removed.

This mambo reference points to a stylistic turn in Spanish language literature as well. one that has created a controversy as English speakers unfamiliar with Hispanic literature have not recognizes a specific accepted style of writing. Instead, they think there is something wrong with the use of the English language or thought process. Moving backward and forward in time and inserting parts of the protagonist's life story here and there is a sort of mambo in itself, allowing the story to reflect the original title.

Other readers lament that all good scenes featured in the original Repossession Mambo novel could not be put on screen. One such scene in that in which a repo man cuts out an organ from a deadbeat client, but finds soon afterward that the man had already made his payment after all...Too late! - The client was dead too long to resuscitate.

Which production do you consider most entertaining and worthwhile?