The Eagles hail from Los Angeles, California. Formed in 1971, by Glenn Frey and Don Henley, they have rightly gained a place in rock music history as one of the most talented bands ever. They have sold over one hundred and fifty million records worldwide and picked up six grammys for their work. They have produced some of the finest country-rock music and spawned many top forty singles.

The album, Hotel California, sold over sixteen million copies in the US alone and yielded three top twenty singles: Hotel California, Life In The Fast Lane, and New Kid In Town. The title song was written by guitarist Don Felder, who, along with new member, Joe Walsh, supplied the unforgettable, highly melodic, guitar solos.

I have transcribed the chords as all Root 6 and Root 5 barre shapes. Of course, some of them could be open shapes (A, G, D, Em7), but, since barre chords are difficult to execute, the more practice, the better. Be aware though, that even with the proper technique, they can be tiring and even painful when employed for an entire song. If you feel pain, stop and rest, or go on to something else. The acoustic arpeggios at the beginning and throughout the tune are played with a capo placed on the seventh fret. This turns all the chords into open shapes:

With and Without Capo Comparison

The capo moves all the chords up a fourth.

Since the tempo is medium slow, I have notated a mixture of eighth and sixteenth note rhythm slashes. Use downstrokes for the eighths and upstrokes for the sixteenths. Although this strumming pattern can't be found on the recording, it works well as an accompaniment to a vocalist or another instrument playing the melody. Any song can be transcribed this way, with any strumming pattern, as long as it is within the time signature (in this case, common time). 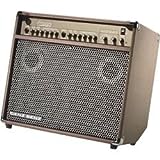 Newly redesigned to reduce its weight while keeping all of its warm rich tone. weighing only 29 lbs, the shenandoah stereo 60lt pumps out 60 watts of power and projects warm, articulate tone from its dual 61⁄2 inch speakers and studio-quality lush stereo 24 bit digital effects processor with 16 preset programs.the preamp has two separate channels, each with a 3-band eq with sweepable mid-range for flexible feedback control. the preamp offers one xlr mic input (with phantom power) and two 1⁄4 inch instrument inputs which mix together for additional versatility for use with multiple players.

On a dark desert highway, cool wind in my hair
Warm smell of colitas, rising up through the air
Up ahead in the distance, I saw a shimmering light
My head grew heavy and my sight grew dim
I had to stop for the night
There she stood in the doorway;
I heard the mission bell
And I was thinking to myself,
"This could be Heaven or this could be Hell"
Then she lit up a candle and she showed me the way
There were voices down the corridor,
I thought I heard them say...

Her mind is Tiffany-twisted, she got the Mercedes bends
She got a lot of pretty, pretty boys she calls friends
How they dance in the courtyard, sweet summer sweat.
Some dance to remember, some dance to forget

So I called up the Captain,
"Please bring me my wine"
He said, "We haven't had that spirit here since nineteen sixty nine"
And still those voices are calling from far away,
Wake you up in the middle of the night
Just to hear them say...

Mirrors on the ceiling,
The pink champagne on ice
And she said "We are all just prisoners here, of our own device"
And in the master's chambers,
They gathered for the feast
They stab it with their steely knives,
But they just can't kill the beast

Last thing I remember, I was
Running for the door
I had to find the passage back
To the place I was before
"Relax, " said the night man,
"We are programmed to receive.
You can check-out any time you like,
But you can never leave! "

Joe Walsh sticks to his normal style here, the 'less is more' approach. The licks are melodic, simple and phrased tastefully over the chords. The parent scale for the solos is the B Natural Minor scale, but the Harmonic Minor scale is employed over the dominant F♯7 chord. This scale differs from the normal natural minor by one note: the raised seventh degree

Don Felder takes a much more complicated approach. This solo sounds excellent after the simplistic nature of the preceding solo. It almost sounds like the song takes off here. He employs a number of hammer ons, pull offs and slide to create his licks (notated with a slur line). If the note is higher, the next note under the slur is hammered on, if the note is lower it is pulled off. The slides are notated with the normal notation. With this technique the playing sounds very fast but the picking motion is minimal. Strike the first note and four notes are sounded.

In the video lessons, the solos are broken down into licks to make them easier to master.