How To Prepare a Song for a Musical Theatre Audition

At a typical audition for a musical theatre production, you should only expect to be able to sing 16 bars of a prepared song. So the choice of your song is paramount. Tips on choosing the correct song: 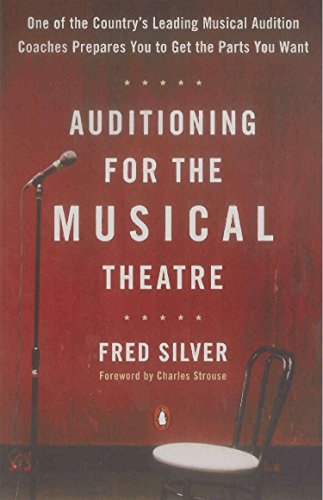 Auditioning for the Musical Theatre: One of the Coutnry's Leading Musical Audition Coaches Prepares You to Get the Parts You Want
Buy Now

Ideally, you should have a repertoire of 10-14 songs that you have each prepared the way I will outline below. The songs should range in music type and character type so that you can audition for any role in your age and voice range with at least one up-tempo and one ballad appropriate to the character.

Preparing a song to perform at an audition is different than preparing it to perform in a show. To begin with, you don't have the same context at an audition as you do in a show. Your audience (the auditioners) have not had a chance to see you develop a character. You need to show them through the song that you have a character in mind for the song, and that you can deliver powerful emotion through song alone, without props or other actors to work with.

The song needs to be delivered as if it were a monologue. The song itself is only a part of the story, underneath the lyrics there should be an inner monologue, or "subtext", that you develop which is your motivation for each lyric you sing. In the case of an audition piece, the subtext does not have to be at all related to the character or show that the piece came from. For example, your song might be "Still Hurting" from The Last Five Years, but rather than write your subtext as the character of Cathy from the show, you can write it as yourself, talking about issues from your own life.

To write the subtext for a song, do the following:

Knowing how to sing a song amazingly well isn't enough. You need to not only sing that song, but perform it. That is where the subtext comes in. When you sing a line of the song, you must be thinking and acting like you are saying the subtext. It should shape your facial expressions, your emotions, and your movements.

Determine where the "audience" of your monologue is situated. Is it at the right side of the stage? In front of the stage, above the auditioners' heads? (Never use an auditioner as your monolgue audience!)

Start at the center of "the stage" (which may be your bedroom floor). Then, for each line of the song, look at your subtext and determine:

As with all things, practice makes perfect. Practice not just singing your piece, but performing it, keeping your subtext in mind, and delivering movements and facial expressions based on it. There is a wonderful phrase, which has been muddled about a bit over time, but comes initially from Stanislavski, which goes:

The difficult must become easy, the easy become habit, and the habit become beautiful.

Keep that in mind while you practice! Your piece will eventually become so habitual that you won't need to explicitly think about the words or the subtext, you will just feel them and be moved by them, and that is when you will achieve the real beauty of the piece, and that is what the auditioners are looking for!