How to Audition from the Director's Point of View - Preparing

How many articles on auditioning can offer you advice from both sides of the stage?

For most of my theatrical life, I've suffered the tribulations of an actor. However, the past few years have led me into playwriting and directing, which poses unique challenges. In fact, right now, I'm hip-deep in the auditioning process for my new play Helltown Buffet, as both playwright and director.

Though this hub offers perspectives from both sides of the audition table, it concentrates on usually-rare advice from the director side rather than from the more common actor side.

Nothing annoys me more than having actors ask questions that are clearly answered in the audition notice. My notices typically contain everything you need to know: play title, the roles, the date and time, and the location. It tells me that they're careless and who wants careless actors in the play.

But if any of that information is missing from the notice, I'm grateful if an actor lets me know ASAP, so I can change the notice. I also don't mind answering questions that aren't in the notice such as parking and salary (see below).

Make sure you meet the requirements for the part.

One foolish actor auditioned for me under a different name, even though I told him over the phone that he couldn't because he was union and the role wasn't. He gave a great audition so I cast him. About a week into rehearsals, I discovered his deception while doing casual research on the Internet. I chewed him out for wasting both our times for a week and for preventing me from hiring a qualified non-union actor. Then I fired him. He'll never work for me again.

Clarify the salary structure beforehand, if that's important to you.

Theater is very much a labor of love, so salary is rarely posted on notices and requires some detective work to ferret out. As a general rule, non-union theater, community theater, or venues under 100 seats will pay you nothing or next to nothing. Even larger, professional, union theaters won't pay you enough to survive. (All the professional stage actors I know have second jobs.)

You can always ask about the salary. That's usually information I'll give individually mostly because I don't want to go through the disappointment of finding the right actor only to discover that the salary is too low for him to do the play.

Research the theater, the play, and the director on the Internet.

Most theaters, playwrights, and directors have a webpage or two that can be Googled. (In my case, you can easily look up Rude Guerrilla Theater, Helltown Buffet, or Aurelio Locsin.) Reading these websites can offer you such insight as styles of plays done at the theater, what plays the author has written, and the experience of the directors. Actors who do this homework always impress me because it shows they go the extra mile for their roles.

Be sure to also look for reviews related to previous productions of the play, at the theater, or by the director. This will round out your knowledge of the play and its characters, which can only help your audition.

Scripts are usually available in your public library, university library, or at your local bookstores. Unproduced scripts can frequently be emailed to you by the playwright or the theater (and this will be clearly stated in the audition notice.) Finally, many classic plays, such as those by Shakespeare, can be downloaded for free from the Internet.

If the notice asks for a monologue:

I typically use cold readings from the scriptin my auditions: you'll be reading from a piece of the play:

You must bring two important marketing tools to the audition:

Make sure that both these tools are accurate.

Dress the actor, not the part.

Check out traffic conditions and the parking situation before you head for the audition.

It won't help you to arrive five minutes before the audition, if it takes you 15 minutes to find parking. (I may even lock the theater doors after a certain time.) There's just no excuse for arriving late, given all the Internet resources that can help you:

Be sure and check out the next part of this article How to Audition from the Director's Point of View - At The Theater.

How many plays have you auditioned for? 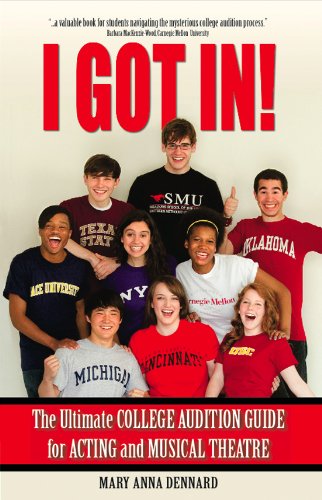 I GOT IN! The Ultimate College Audition Guide For Acting And Musical Theater
Buy Now