I Dream of Jeannie Tribute

I Dream of Jeannie

"I Dream of Jeannie"--what a great show! Growing up in the '60s, I fondly remember the first time the TV series, I Dream of Jeannie, appeared on the air. I was mesmerized by the show, and thought Barbara Eden was the most beautiful woman in the world! I wanted to look just like Barbara when I grew up, and my brother hoped to one day marry her! I spent many hours laughing at the antics of Jeannie, Tony, Roger, and Dr. Bellows; I think my brother would have traded places with Tony in a minute!

I get sentimental when I look back in time to that magical evening in 1965 when I Dream of Jeannie premiered on television. At eight years old, I was captivated by this amazing new show, which was unlike anything I had ever seen before, and so was my family.

Today, I am a professional fantasy artist of the big-eye genre. Among my favorite characters are my big-eye "Genie" dolls, my tribute to this wonderful TV series and the lovely and talented Barbara Eden. My "I dream of Jeannie Doll" painting was even featured in the book, Big Eye Art: Resurrected and Transformed, which was written by "yours truly" and published by Merrell Publishers in 2008.

Sit back, relax, enjoy the celebration, and reminisce a little . . . blink yourself back in time to those fun and carefree days of I Dream of Jeannie!

The Beautiful Jeannie is Freed from Her Bottle

I Dream of Jeannie, an American sitcom with a fantastical premise, premiered on September 18, 1965. It was produced by Sidney Sheldon for NBC and starred Barbara Eden as a 2,000-year-old genie and Larry Hagman as an astronaut who frees her from her magic bottle, thereby becoming her "master." Jeannie (Eden) falls in love with Tony right away, but Tony rebukes her advances, leading to hilarious consequences, especially when Tony attempts to date other women. In the end, Tony finally succumbs to Jeannie's charms and they end up marrying.

The first season, in black and white, consisted of 30 episodes. New episodes of the show ran from September 1965 to May 1970, with season repeats airing until September 1970. The show ran for five seasons and produced 139 episodes.

Jeannie Out of the Bottle book 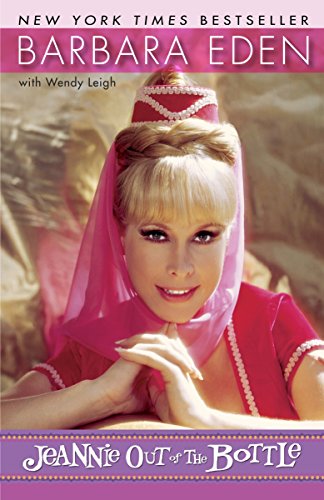 Jeannie Out of the Bottle

I read this book on Kindle and truly enjoyed it. Barbara comes across as very honest and humble and I found her story absolutely fascinating. Most of us think that life is all glitz and glamour for celebrities; Barbara's life story proves that that couldn't be further from the truth. A very well-written, sometimes funny, sometimes heartbreaking, but never, ever dull tribute to a great lady.

All I do is think and blink.

I Dream of Jeannie--Created to Compete with ABC's Bewitched

In 1964, ABC's Bewitched, starring Elizabeth Montgomery, was the second most watched program in the United States. To compete with ABC, producer Sidney Sheldon (of NBC) came up with the idea of a sitcom starring a beautiful genie, inspired by the movie, The Brass Bottle, starring Tony Randall, Barbara Eden, and Burl Ives. Interestingly, Barbara Eden wasn't the genie in this feature--Burl Ives was. He played Fakrash, a male genie.

Since Samantha (the witch) in Bewitched was blonde, Sheldon was adamant that the genie in his show must not be blonde. After countless unsuccessful auditions for the "Jeannie" character, Sheldon finally hired Barbara Eden out of desperation.

The first season of I Dream of Jeannie was filmed in black and white due to the special photographic effects required for the magic effects and also because the network (NBC) didn't expect the show to last past the first season.

I Dream of Jeannie--More Popular as Reruns?

During its five-year run, only twice did I Dream of Jeannie make it into the top 30 in Nielsen ratings. Interestingly, after the show was cancelled and New York's WPIX began showing reruns of the show, Jeannie won its time slot with a 13 rating and a 23 share of the audience, averaging a 14 share and 32 share of the audience. When reruns of the show began airing on WTTG in Washington D.C., It became the first off-network series to beat network competition in the ratings.

The popularity of I Dream of Jeannie prompted Hanna-Barbera Productions to produce an animated Jeannie series from 1973--1975. Voices were provided by Julie McWhirter (Jeannie), former Three Stooges star Joe Besser (genie-in-training Babu), and Mark Hamill (high school student Corey Anders). In an interesting switch from the original series, a high school boy is master and Jeannie and Babu the servants.

On October 20, 1985, an I Dream of Jeannie sequel aired. Titled, I Dream of Jeannie: Fifteen Years Later, the movie starred Barbara Eden as Jeannie, but the role of Tony, instead of being played by Larry Hagman, was replaced by Wayne Rogers, of Mash fame. Dan Daily reprised his role as Roger Healy, as did Hayden Rorke, the original Dr. Alfred Bellows.

Here is the plot: Jeannie and Tony have been happily married for fifteen years. Tony, preparing for his retirement from the NASA space program, is egged on by colleges to go out with a bang; Tony is talked into going up one last time, breaking his promise to Jeannie. Even worse, he also goes up with a female astronaut (Captain Nelly Hunt) which doesn't set well with a jealous Jeannie. Furious, Jeannie decides to temporarily separate from Tony and become an independent woman. Meanwhile, the space shuttle is in trouble: Tony is headed on a collision course with a meteoroid and the engines won't fire!

Jeannie II (Jeannie's evil sister), who wants Tony for herself, hatches a plot with Haji, the chief genie (who is operating a fitness gym in the United States) to get Tony for her own. Jeannie II traps Jeannie in a special bottle that only another genie can open. When Jeannie's son, T.J., comes home, he tries to free Jeannie from the bottle, but the stopper won't budge. When Jeannie instructs T.J. to blink, he magically releases her from the bottle, which leads T.J. to the discovery that he has inherited his mother's magic powers.

The duo visit Haji to request a special dispensation to save Tony's life. Haji agrees to do so but on one condition: Jeannie must end her relationship with Tony. With no other options, Jeannie sadly agrees, and is permitted to spend one last night with Tony to say goodbye to him (in her heart).

The final scene of the movie shows Jeannie and Tony passing on the street. When Jeannie magically gets Tony's attention, it is evident that they will meet again. Jeannie wisely says, "Haji made me agree to an ending. He never said there couldn't be a new beginning." The last scene shows a bewitched Tony following Jeannie down the street.

I Still Dream of Jeannie

On October 20, 1991, a second I Dream of Jeannie sequel was released, titled, I Still Dream of Jeannie. For the second time, Larry Hagman was unavailable--he had just completed a 14 1/2 year run on Dallas, and was vacationing with his family. The part of Tony Nelson was given to Ken Kercheval (of Dallas fame).

The movie's wacky plot all starts when Tony is assigned to a top-secret mission for NASA. Poor Jeannie has no earthly idea of Tony's whereabouts or when he'll be returning home. Their son, Tony Jr., will be graduating soon, and Jeannie wants his father to be there for his academic presentation speech.

Jeannie makes a visit to NASA to question General Wescott about Tony, but he refuses to cooperate! And to make matters worse, Jeannie's evil twin, Jeannie II, tries to get Jeannie deported back to Mesopotamia forever, reminding Sham-Ir (the chief genie) that Jeannie cannot remain in the plane of reality for more than three months without an earthly master; Tony has been gone a very long time, and Jeannie is getting worried!

Sham-Ir gives Jeannie two weeks to find a new master, or return to Mesopotamia forever. Laughs and misadventures abound as Jeannie desperately searches for a temporary master, even visiting a singles bar!

I Dream of Jeannie Merchandise

Over the years, I Dream of Jeannie merchandise has been created to satisfy those of us who have an affinity for the show. Interestingly, most of the merchandise was created three years after the show went into syndication.

During the show's run, a board game was created, as well as books and a Ben Cooper Halloween costume. The I Dream of Jeannie doll, created in 1966 by Libby, is rare and widely sought after by collectors; there was also a playset created for the doll, so children could act out their favorite scenes from I Dream of Jeannie. At last check, one of these playsets sold for over $500 on eBay!

I Dream of Jeannie Maquettes

Why not add the ultimate collectible to your I Dream of Jeannie collection--a "magic" bottle just like Jeannies!

Michelle Edewaard is an award-winning artist who hand paints her bottles to perfection. Each and every bottle is painted on an authentic antique 1964 glass Jim Beam genie bottle. Her meticulously painted designs are perfect reproductions of the original series and reunion show bottles (except her custom bottles). Michelle even personally crafted a Jeannie bottle for I Dream of Jeannie herself--Barbara Eden.

You have to see them to believe them--these stunningly beautiful Jeannie bottles are available for purchase now on Michelle's Web site: https://www.dreamyjeanniebottles.com/

My I Dream of Jeannie Inspired Genie Art

I researched the Internet for costume, hair, and magic bottle reference photos to assist me in painting Jeannie. I then sketched out in charcoal pencil the outlines of my design for my Jeannie and also included her purple magic bottle. I painted her in acrylics on a 20- by 16-inch stretched canvas, and designed her with a very unique look that was a first for me. She took me about a month to complete.

When I e-mailed photos of the completed "I Dream of Jeannie Doll" painting to My client, she was so thrilled with the results, that she asked me to paint Jeannie's evil sister as a companion piece, which also took about a month to complete. Jeannie's evil sister had the same unique look as Jeannie # 1, but with dark hair, green eyes (instead of blue), olive skin, and a two-tone green skirt in lieu of harem pants. And, oh yes--she had a birdcage in her hand--with a screaming shrunken Major Nelson inside! I wonder who was responsible for that?

For Halloween that same year, I decided to paint a Gothic genie in orange and black, complete with kitty ghosts emerging from her magic bottle. In 2009, I painted a genie with red hair in a purple and gold harem outfit with a bejeweled magic bottle. I loved her so much that I kept her for myself (sorry!).

Today I have fun designing and selling a wide range of products created with my genie graphics on Zazzle such as mugs, T-shirts, key chains, stickers, mouse pads, greeting cards, and much more. Check it out on Zazzle.com.

I Dream of Jeannie Cast of Characters (Regular & Recurring)

I Dream of Jeannie Videos

I Dream of Jeannie Theme Song

I Dream of Jeannie--I'll See You in Cuba - Appearance by Farrah Fawcett!

I Dream of Jeannie: The Wedding

Do You Think Tony Should Have Married Jeannie?

Favorite I Dream of Jeannie Quotes

Fun I Dream of Jeannie Links

What do you think of I Dream of Jeannie?