A Brief History of the Band Serpent

Japan is not a country that most people would associate with heavy metal and especially not melodic death metal. But Kobe, If you want to listen to great heavy metal music, Japan’s Serpent is an excellent band to listen to! You won't even want to listen to bands such as Children of Bodom after you hear these guys! Their 2005 album called Cradle of Insanity is full of melody and rough vocals that would leave the heavy metal fan VERY impressed! The vocals are very raspy and hard to understand, but this does not have much effect on the quality of the songs. The band started playing back in 1993 under the name Awaken. But after hearing a song by the band In Flames, they decided to change the band’s name to Serpent. The band would split up in 2000 and not return until 2003. They have four demos, one EP, one split album and two studio albums as of this writing. Note: as of 2020 the status of Serpent is unknown and I will assume that they have disbanded but the middle section interlude in the song Bloody Gates is one of the most impressive moments in this band’s history.

Who Plays On the Album Cradle of Insanity?

A Photo of a Garden in Kobe, Japan

It gave me the chills as I began to listen to this album again. The musicianship is just incredible even for a melodic death metal album.

Note: it may be extremely helpful to do some meditation before listening to this album if you have any unresolved issues that are causing toxicity to build up in your body. I tried to listen to this album without prior meditation and it did not work but with meditation, this should make it easier to enjoy the album but for some of us, patience is a tough issue. I suggest this tip of advice because of the nature of the guitar sounds and the lyrical themes of the album.

Cradle of Insanity: How Does the Album Begin?

The album opens up with a good instrumental song before transitioning into the excellent and melodic song called Bloody Gates. The song is beautifully written yet brutal at the same time. When someone feels like they have lost their soul, they are searching for the meaning of life. This is one of the most melodic songs not just in the history of the band Serpent but in the melodic death metal genre as a whole.

Lunar Eclipse starts with some grunting vocal style that David Sanchez Gonzalez (vocalist of the Spanish band Avulsed) would be proud of. The song also has a time change where there is some piano being played. But the song builds up speed, getting faster with the drums and guitars. The lyrical themes tend to deal with lost love, sadness, grief, and sorrow. However, this is not an album that will leave you despondent and grieving. You will be so impressed with the melody and guitar playing that you will wonder how these guys could show such talent and creativity. This musical creativity continues into the song called Siren Night. The keyboards are mixed in with the tapping lead guitar. The lead guitar continues again being very melodic and is classically influenced. Yngwie J. Malmsteen would be proud of this musical display if he heard these guys play. I really think that Serpent plays better music than Imperanon, Norther, and Children of Bodom. Guitar players should love this album. Angel’s Grave starts with some piano in the background and the structure is similar to Finland’s Eternal Tears of Sorrow. Every one of us will die at some point and death is seen by many people as a sad thing. Whether that is the case or not, it is one of those inevitable things that most of us don’t really want to think about.

The band Serpent vs. the band Shadow

Which one of these two bands do you like more?

Cradle of Insanity: the second half of the album

The second half of the album is still as impressive as the first half continuing with impressive melodies along with the raspy vocals by Ken. Broken Sleep starts out with some spoken dialogue, something similar that Dark Tranquillity would try later in their career. It has a power metal style riff similar to Dark Moor as well. The melodic lead guitar kicks in once again adding to the band’s good mix of time changes. Sea of the Silence starts out with melody and fast drumming called blast beats. Cradle of Insanity is a fine example of a quality album in the melodic death metal genre. It has most of the elements necessary to be an excellent album. The only drawback of the album is the hard to understand vocals. This writer gives this album a solid 90 out of 100 points for remarkable consistency, great songs, good time changes, and lots of melody.

How does the band Serpent compare to Shadow, another excellent melodic death metal band?

However, unlike Osaka based band Shadow, Serpent do not use as much neoclassical elements. They use lots of rough vocals mixed in with keyboard play and fast guitar parts. The amount of melody on this album would leave Finnish music fans very proud! The melodic death metal genre is rich with plenty of excellent bands and Serpent is one of them. Just like German metal band Blind Guardian got off to an excellent start with their debut album, Serpent have been able to do the same.

Rate the Album Cradle of Insanity

Cast your vote for Serpent Cradle of Insanity

A Map of Kobe Japan where the band was formed 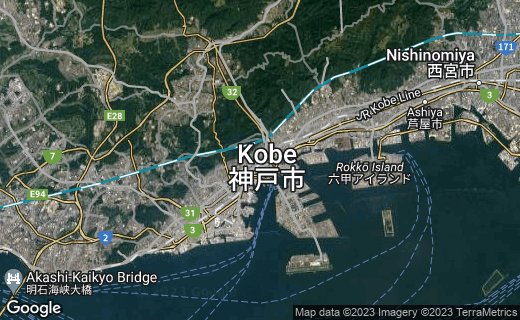