This is incredible,12 NEW songs from Jimi Hendrix!! 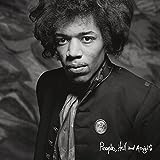 People, Hell & Angels
People, Hell & Angels is a new album of twelve never before released Jimi Hendrix studio recordings. This special album showcases the legendary guitarist working outside of the original Jimi Hendrix Experience trio. Beginning in 1968, Jimi Hendrix grew restless, eager to develop new material with old friends and new ensembles. Outside the view of a massive audience that had established the Experience as rock’s largest grossing concert act and simultaneously placed two of his albums together in the US Top 10 sales chart, Jimi was busy working behind the scenes to craft his next musical statement.
Buy Now

This is the basic chord progression to Jimi's monster tune,

Based in the key of G Major-Em, this song has been covered many times. Blues players such as Eric Clapton and Stevie Ray Vaughn, even shredders Skid Row and

Steve Vai, have had a go at it.

I have transcribed this with rhythm slashes, all downstrokes and a mixture of open chords and barre chords.

Once the chords have been worked out, try to create a full strumming pattern. Since the tempo is slow, try a mixture of eight and sixteenth note slashes:

Example of a strumming pattern

The Genius Of Jimi Hendrix 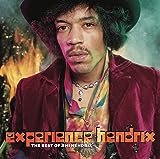 Little Wing With Fills • Part One

Em in measure one is based around the open Em chord. The last eighth note is an F sharp passing tone moving into the G Major barre shape at the third fret. The last two beats of measure two are single note fills from the G Major-Em Pentatonic Scale Box Pattern #3.

Measure three moves into an Am barre shape at the fifth position. The fills are taken from C Major-Am Pentatonic Box Pattern #1 (the second note of beat four is a B, taking the sound back into G Major-Em Pentatonic).

Measure four is a repeat of measure one without the F sharp passing tone.

Measure five moves into Bm9 at the seventh position. The minor 9th chord is a beautiful sounding chord, and the embellishment really adds to the overall sound. The last chord of measure five (A sharp minor seventh) acts as a chromatic passing chord into Am7. Once again, the fill is in C Major-Am Pentatonic Box Pattern #1, with the B and A of beat four moving into the G in measure seven. The fill on the G chord comes from G Major-Em Pentatonic Box Pattern #2.

The F Major in measure seven, has been re-harmonized to form F suspended 2. This is the chord that Jimi played in the intro. It is a true suspended chord, because the third (A) has been replaced by G. The fill is from F Major-Dm Pentatonic Box Pattern #2.

Finally, measure nine is a chord fragment from the D Major barre shape at the fifth position. The fills are played around D Major-Bm Pentatonic Box Pattern #1, with the last note (C sharp), leading into the single note D in measure ten. The trick with this style of playing is to make it sound like it is being improvised on the spot. Take these ideas and try creating your own. A slight change in the phrasing or note choice will make a huge difference.

A more robust version with fret hand muting and more chord stabs. The trick is to make it sound improvised.