Phil Oakey could certainly teach even Madonna a thing or two about invention and reinvention.

When he became a member of the 'original' Human League during the Sheffield Sound days of the late 70s and early 80s, he transformed them from a not very musical outfit into an uber-cool, contemporary, influential alternative synthesiser band.

Phil Oakey made the Human League what they were and still are - he has charisma and was, in his earlier incarnations or inventions, pretty enigmatic too.

And the Human League became the influential band they were in the 80s thanks to his ability to see into the future of music.

Sheffield is a city in Yorkshire in England.

In the late 1970s and early 1980s it became the centre for synthetic musical influence with bands like Human League, Cabaret Voltaire, Vice Versa, ABC and Pulp at the forefront.

Their music was performed live and crowds came from miles around to hear this new sound (German band, Kraftwerk were already doing this in Dusseldorf since 1970).

Electronic music was a relatively new thing in the UK and the Sheffield Sound had a huge influence on it.

At the time, David Bowie was interviewed and asked about where he thought music was going, Bowie pointed to the music coming out of Sheffield and told reporters that that sound -electronic - was the future of music.

Of all of the excellent Sheffield Sound bands, Human League (mark 2) were the most successful. Their success is mainly due to Phil Oakey's ability to turn what was a fairly dark sub-cultural music in terms of sound and make it sound upbeat. He walked away from Human League (Mark 1) and took the band name with him. He reinvented the Sheffield Sound.

Basically, he melded the Sheffield Sound with good lyrics, introduced catchy melodies and created the earliest versions of synth pop.

Not satisfied with that, he then conquered one of the hardest markets to tap into with new, innovative sounds - the U.S.A.

Phil Oakey was not an original member of the Human League or at least he was their second choice vocalist. The other members of the group, Martyn Ware and Ian Craig-Marsh had wanted Glen Gregory but he wasn't available so Ian called an old school friend, Phil Oakey to be their singer; mainly because he was already well-known in Sheffield for being a bit of a fashion conscious guy with lots of style and charisma.

Let's remember though that that is really all they wanted him for - he was good looking and fashionable with a following.

Phil Oakey neither played the synth nor any other instrument for that matter. He had never sung in front of anyone. His initial introduction in the band showed up his shortcomings to the others. No doubt, they all had second thoughts but Phil did something the others were not expecting - he wrote pretty good lyrics.

He was able to listen to their music and just riff with words and then he started to write them down and they were sort of unusual and best of all - he created melody with them, it all clicked into place.

So Human League started to play the pubs and clubs in Sheffield and soon got an audience.

They got a record deal with local record company, Fast, already gaining a reputation for electronic pop and recorded their first single, 'Being Boiled'.

Early live recordings were semi-successful. They were already gaining a reputation for writing pretty decent electronic songs. New Music Express took Human League under their wing, featuring them prominently a number of times in the late 70s.

Live though, they were a bit flat - tape machines, amps, computers, drum machines and keyboards seemed to dwarf the three guys on the stage.

That is when Adrian Wright, an old friend of Oakey's joined the band as their 'visuals' guy. Adrian was studying at art school and was interested in bringing a visual element to their stage act. The inclusion of Wright gave Human League another dimension and their live act got better with Wright projecting background images behind the band and creating a new concept with an artistic yet industrial edge.

People came to Human League concerts to see Oakey's swagger, the images, the sounds and they danced. Human League served as support for The Rezillos in 1978 (post-punk), Siouxsie and the Banshees and Iggy Pop in 1979.

Their signing with Virgin Records should have seen them succeed. They had the support of one of the biggest independent labels in the UK but their singles and EPs charted very low and Virgin pulled the plug on a planned tour because of that lack of success.

Gary Numan's (Tubeway Army) 'Are Friends Electric?' was released and got to Number 1 in early 1980 and the Human League, once at the forefront of electronica had missed a trick.

Martyn Ware wanted to stay true to their electronic roots - no acoustic instruments, no real drums, no guitars.

Oakey, on the other hand could hear that Numan had moved electronica in a new direction.

Oakey wanted to meld styles - electronic, acoustic, female vocalists (which had already been tried with Human League but only because Virgin were trying to get them to make a 'hit' sound).

Phil Oakey took on a lot when he kept 'Human League' as his new band's name. He had to take on the old band's debt and agree to pay Ware and Marsh 1% of any first album sales.

Ware and Marsh formed Heaven 17, also a successful band but not in the same league commercially. They would go on to produce Erasure and bring the career of Tina Turner back to life with 'Let's Stay Together'.

Phil Oakey though would collect around him some talented musicians and two local girls and create a different Human League - he would effectively create synth-pop.

So Phil Oakey, with Virgin Records complete support auditioned a number of musicians to join the band. Jo Callis, formerly of the Rezillos was a talented musician, able to play both guitars and keyboards.

Oakey joked at the time that Callis 'can play keyboards with both hands at the same time.' (a dig at Ware and Marsh?). Callis was joined by Susanne Sulley, Joanne Cathrall, Ian Burden and his old bandmate, Adrian Wright who had gone onto play occasional keyboards and also write songs with Oakey.

Of course, what he did not overlook was his own ability to succeed. In spite of his in-fighting with Ware whilst they were together, Oakey provided the original line-up with a good vocalist, lyricist and melodic talent. He felt, quite rightly that he had done as much as Ware and Marsh to make the original band successful - this was his chance to take his ideas one stage further.

Contractually, Human League had to start a UK and European Tour within weeks of the split; Oakey gathered his new band together in a week, rehearsed for another week and went on tour. The tour was a disaster but you can't keep a good man down.

He was introduced to pop producer, Martin Rushent who talked him out of Sheffield - it was to be the beginning of a beautiful friendship.

Virgin, to their credit, stuck by him, gave him some space and within months they released Human League's next single, 'Sound of the Crowd'.

It was the Human Leagues' (either version) biggest hit to date. Oakey was making his point! 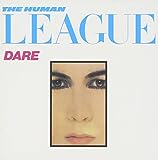 Phil Oakey, Jo Callis, Adrian Wright and Ian Burden all wrote songs together for their first album, 'Dare', little knowing that the album would become one of the most successful albums of the 1980s.

Indeed, the album spawned a number of chart successes with songs like 'Love Action', 'Sound of the Crowd', 'Open Your Heart' and the mega-hit, 'Don't You Want Me'.

The latter song was released with a promotional video which had atmosphere in spades and had the UK public buying the single in droves.

Phil Oakey, the lad from Sheffield must have been puffing out his chest by this time. His debt problems were over and the band became huge worldwide.

Human League's second album, 'Hysteria' was not anywhere near as successful as Dare but still had some good tracks, like 'Mirror Man' and 'The Lebanon'.

Virgin Records have shown amazing support for Oakey's talents over the years. They have believed in his ability to identify trends and react to change with something new.

When Human League were joined by American producers Jimmy Jam and Terry Lewis for their next album, it would be a meeting of minds; both producers had achieved fame with their own synth inspired soul ballads and pop records so the album, 'Crash' should see the same success as Dare, right?

Well, yes and no! The single 'Human' was a worldwide hit and cemented the Human League's success in the States where they have remained popular.

In the UK, they still tour regularly but usually as headliners of 80s revival gigs. They have carved out a successful career as a festival band and remain a professional outfit; not bad for 2 schoolgirls and a bloke who can't play any instruments.

Beats International - 'In The Ghetto'

Utah Saints - 'Believe In Me'

And who have they influenced? How about most of the synth pop bands around today including bands like A-ha, Berlin, China Crisis, Depeche Mode, Dead or Alive, Frankie Goes To Hollywood, Ellie Goulding, Lady Gaga, Little Boots, Killers and Pet Shop Boys.......