The Very Best of Italian Rock: Language No Barrier to Good Music (with videos)

The Very Best of Italian Rock: Language No Barrier to Good Music

Why should all good Rock music be sung in English?

It dominates our airwaves and yet there are many great artists out there in the non-English speaking world who have produced fantastic music but are largely ignored.

Here are some Italian musicians that I have enjoyed in the past year. Once you get past the language barrier you might find yourself tuning in to the melodies.

After all it's the music that matters and if we can dance to 'Be-Bop-a-Lula', 'Tutti-Frutti' and 'Rama Lama Ding-Dong' then there's no reason not to enjoy these.

In Europe MTV hold music awards every year and several Italian rock bands have won the Italian heat in recent years. The 2009 winner was a young band called Lost with an American style of Pop-Rock that was popular in Italy.

With melodic songs songs such as ‘Sopra Il Mondo’ their debut album achieved gold staus at home. They also collaborated with Joel Madden of the US band Good Charlotte in the catchy song ‘Sulla mia Pelle’.

Another young band Finley won the MTV award in 2006 and 2008 with their US style Pop-Punk clearly influenced by the sound of ‘Green Day’ and they also took their name from American basketball star Michael Finley.

Slightly older but still in the flush of youth are Moda, another Pop-Rock band popular with a female audience. Also Verdena who's music is inspired by the Grunge sound of Seattle.

The band Negramaro, winners in 2005, are another hugely popular band in their own country. They have a wonderful Rock ballad called 'Una Volta Tanto' taken from their 'San Siro Live' album.

It sounds like an Italian 'Bon Jovi' moment especially as the crowd are predominantly female judging by the falsetto singing accompanying their show. They also play a song 'Un Passo Indietro' which is another melodic ballad I liked.

They belong to the Alternative Rock scene alogside other top bands like Litfiba, Negrita, La Vibrazione and Subsonica.

They have an Italian version of 'Virgin Radio' over there which is actually better than the British original with more Rock and Metal than the latter. Virgin in the UK to my mind always thought favoured Indie music too much and was also quite repetitive.

However, I've expanded my personal horizons a little especially listening to Italian rock and listening to the radio when I was living and working over there. It really opened my eyes to a much group of excellent Rock bands and singers.

Masters of the six-string

But of course being out in Italy in the summer there were a lot of upbeat, happy tunes going on in my ears and my favourite music is the stuff that soars.

Music played with spirit and gusto that makes your spine tingle and takes your breath away.

There's a song called 'Fuori' by an Italian artist called Alex Britti, a brilliant guitarist who fuses jazz, blues, rock and whatever takes his fancy I suppose. He also adds little quirks and effects to the arrangements which lend a humorous ingredient to the music.

But the song 'Fuori' really hits the mark with me. Britti starts the song quietly and then builds up the feeling as the vocals become stronger and the instrumentation gradually comes together. Tantalising in the middle as he drops the tempo back down before heading off again into a tremendous finale full of electric soul and passion.

That's the kind of tune that makes me feel like running up Monte Baldo, avoiding paying €18 for a cable-car, and leaping off over Lake Garda on a hang-glider. That song is seriously stratospheric in my book, but maybe it's just me as music can be really subjective. But it hits the heights as much as the magnificence of Progressive Rock legends.

'Yes', it's as good as the ambient finale to the epic 'Awaken' as Jon Anderson's angelic vocals sweep over your consciousness and the ending of 'To be Over' with Steve Howe injecting a dopamine-enhanced rush through your central nervous system with inspired guitar. Check out other songs by Alex Britti such as 'Milano', 'Festa' and the sprightly 'Sola Una Vez O Toda La Vida'.

Another tremendous guitarist is the legendary Pino Daniele who hails from Naples. Incredibly eclectic, his recognisable falsetto vocals have flowed over his guitar sound for around 40 years. His back catalogue includes almost every genre you can think of including Rock, Blues, Jazz, Folk, Latino, Arab, African. You name it, he's probably played it.

Lying on the beaches in sunny Italy the Irene Grandi song 'Un Bagno in Mare' gets my vote as a perfect summer song.

But she has many great tunes and puts a lot of emotion into her vocals.

Such as the exotic cool of 'Che Vita E' and the haunting 'Una Nuvola Bianca' where she pushes her voice to the limit.

She also has a great driving song called 'Oltre' which fairly riffs along. She mixes styles with some of her music having a Latin feel to it as well as more rockier numbers and acoustic ballads.

Look out also for the wonderful Elisa who has a Soft Rock style similar to Alanis Morrissette. She has sung in English too and never better than the incredible 'Rainbows' which puts her soaring vocals to the utmost effect.

The march of progressive

Another Italian singer I really enjoy is Biagio Antonacci. 'Sono Cose Che Capitano' is a jolly tune that gets my toes tapping as does another song 'Che Fretta C'é' which has a charming Mediterranean feel about it.

For the more progressive genre of Rock music I would highlight two bands. Describing themselves as Indie/Alternative/Experimental, Genoan band Meganoidi are certainly all three with their brand of ‘stoner’ type music.

Tracks like ‘Solla Alla Fine’ with its floating trumpet sound in the background testify to that and the more upbeat ‘Zeta Reticoli’ brings the brass to the forefornt of the mix. They sing mostly in Italian but also intersperse their tunes with English.

A real class act are Marlene Kuntz who play a sophisticated style of dark and brooding Progressive Rock music. They have been on the music scene for around 20 years and if you enjoy well-constructed songs played with panache then they are worth a listen.

As well as 7 minute epics like ‘L’Abraccio’ and a cover version of ‘Impressiono di Settembre’ which are reminiscent of Radiohead, they also have more up-tempo music in ‘Cometa’ and ‘Il Pregiudizio’ to liven up proceedings.

However there are far too many Progressive Rock bands to mention as there are literally hundreds from Italy over the past four decades.

But I can't figure out why the TV and Radio channels back home don't play more foreign language music.

It's incredible how English totally dominates the airwaves especially on the BBC which is Public Service broadcasting with no commercials.

So it should have more latitude to cater for minority tastes and multi-cultural initiatives.

Now I've discovered that there is some fantastic Italian music with great tunes and wonderful singers.

I guess there must be more going on in other countries without gaining the international exposure.

Rammstein are a notable exception having broke through despite insisting on singing in German. I actually think that their language lends itself well to Metal anyway "Du Hast Mich!" wouldn't have the same power if they were singing "You Have Me", although there is an English version of that classic.

Also, once when I was watching the French film "La Haine" I started getting into the rap and hip-hop soundtrack music simply because it was in French. Normally I can't abide that genre but it sounded kinda cool in their language. Speaking of rap.

If your taste is extends to nu-metal then Turin band Linea 77 may be up your street. With a breathless rap-style in Italian interspered with anthemic choruses on songs like ‘Il Mostro’ they are exciting proponents of that kind of music. They also sing in English on the hard-edged tune ‘The Sharp Sound of Blades’ with scream vocals by Emo, their appropriately named singer.

For Power Metal check out Rhapsody of Fire who have a European following and also Dominie.

Of course some artists do sing in English and the most popular Italian Rock band internationally is without a doubt Lacuna Coil who have the beautiful Cristina Scabbia on vocals.

They have played to thousands throughout Europe on the festival circuit and can headline medium-sized venues in the UK.

Best songs are perhaps ‘Our Truth’, ‘Enjoy the Silence’ and my choice ‘Cold Heritage’ a wonderfully atmospheric mid-tempo rocker.

Another English-language band are Belladonna who also have an attractive female-lead in Luana which does no harm in the video market for their legion of young male fans. Songs like ‘Love Me Till I Die’ and ‘Black Swan’ in a style they call ‘Rock Noir’ mark them out as a quality act.

The softer side of Italian Rock

I also like Guiseppe Povia especially his famous song from a few years back 'I Bambini Fanno Ooh!" which I remember watching him singing on TV at the Rome concert for 'Live 8' back in 2005. See! the BBC can do it when they want to.

I discovered lots of his other songs like 'Centravanti di Mestiere' which although having the strange sound of him talking manically through the song instead of singing, ends with a cracking guitar riff which style reminds me so much of Slash's guitar playing.

To complete a superb triumvirate there's the classy 'Ti Asseggeró Piano' which again is one of those songs that begins mellow before soaring into the air and floating on long notes.

A bit more in a rocking vein is Nek who has been around for 20 years. He has a large female following due to his commercialised style of Pop Rock and ballads. His good looks don't do any harm to his career either but he has produced some straight-out rockers like 'Congiunzione Astrale' and 'La Voglia Che Non Vorrei'.

Or even better have a listen to Gianluca Grignani who has many great Rock songs to offer. He is another singer-guitarist popular with the ladies with many romantic songs and ballads. But he crank it up too into a little more heavy style.

Legends to the fore

But for me Luciano Ligabue has the lot, this guy is brilliant as far as I'm concerned and plays to a mass audience in Italy.

Vying alongside the legendary Vasco Rossi and the international star Zucchero he is one of the most popular solo artists in contemporary Italian Rock.

The much loved hell-raiser Rossi is the poet, a modern cantatore who seems universally loved throughout Italy for his music. He likes to rock but he also sprinkles some magic on his tunes with depth and feeling. Ligabue is the straight-forward rocker in a direct lineage from 1950s rock n' roll.

Zucchero is the more verstaile artiste varying between Gospel-inspired tunes to Blues, Rock and recently Cuban music. He is also better known internationally having collaborated with the greats like Sting, Eric Clapton, Elton John, Joe Cocker and Miles Davis

But I love all of Ligabue's music, he's a marvellous singer and has come up with some killer riffs and guitar tunes.

Check out 'Ho Ancora la Forza' an upbeat, life-affirming song and the words 'Sempre Vivo!' are often on my lips. Here's a video for another of his top tunes 'Buonanotte all'Italia'. 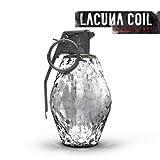