A Lovable Rogue and an Innocent Governess

In the 1983 BBC version of Jane Eyre,Timothy Dalton plays the troubled Mr. Rochester. And he was born to play the role. He is commanding yet vulnerable. His very casting off of convention makes him a sympathetic character to audiences that can relate only too well to those moments in life when convention is defied to realize a heartfelt desire. Rochester is a rogue who pushes the boundaries without a moment's hesitation.

Zelah Clarke portrays the principled Jane. Her innocence, demureness and morals are the perfect contrast to Edward Fairfax Rochester's tortured and passionate persona. In spite of her resolve, Jane is like a moth drawn to a flame and she knows she risks getting burned.

Fate has seemingly brought these two people together and they are akin... but convention and morality stand in their way and at Thornfield hall, all is not as it seems.

A Living Hell or Bliss?

Rochester is young and idealistic and does his duty, something that will cost him dearly and alter the course of his life. Will he once again do "as he is supposed to," surrendering to man-made laws which shackle him and consign him to a living hell or will he defy convention, the law, and even God Almighty, to finally find happiness?

When you came upon me in Hay Lane last night, I thought unaccountably of fairy tales, and had half a mind to demand whether you had bewitched my horse.

To live, for me, Jane, is to stand on a crater-crust which may crack and spew fire any day.

Thornfield Hall is forbidding and sets the tone for the story, a gothic tale filled with mystery and secrets.

Jane's quiet role of governess is side-railed with the appearance of the enigmatic Mr. Rochester, master of the manor. His dark, brooding personality transforms as the repartee between him and Jane takes on a life of its own.

Rochester's preference for Jane becomes obvious and he tries to shake her from her firm standing for morality and convention.

Rochester is determined to make Jane his own, even if he has to fly in the face of social norms and take a wildly unconventional route to accomplish his objectives.

Temptation and a Terrible Secret

Jane has much to contend with, the temptation of casting morality to the winds and a secret that may stand in the way of any chance for love.

Since happiness is irrevocably denied me, I have a right to get pleasure out of life: and I will get it, cost what it may."

"It was nothing but a creature of your imagination... "

As with all good love stories, the road to happiness is littered with obstacles. In this British movie adaptation of Jane Eyre, morality, convention and societal rules are pitted against reason, compassion and mercy.

Jane is the quintessential good girl who has a yearning for love and acceptance but who plays by the rules.

Rochester is the quintessential bad boy who is not only willing to bend the rules but is prepared to break them.

Rochester is willing to move heaven and hell to make Jane his own.

If that boisterous channel and two hundred miles of land come broad between us... I shall take to bleeding inwardly.

Jane Eyre is Considered One of the Most Famous Works in English Literature.

The tale poignantly captures unrequited love, something that generations of people have identified with.

A Romance to End all Romances

This is my all-time favorite movie version of Jane Eyre. Timothy Dalton was born to play the tortured Mr. Rochester. If you've ever thought of English movies as stuffy and boring, this movie will blow that perception out of the water. Rochester's rule-bending, intensity, passion, and his vulnerability and need for love is an unbeatable combination that has had a legion of female fans swooning.

Casting convention aside, Rochester asks Jane to marry him and in spite of her misgivings about their different social status, Jane accepts. But the secret hidden within Thornfield hall rears its ugly head and prevents their union and now the two lovers are to be torn away from each other. Will they ever find love and happiness?

"So, you shun me... You shut yourself up and grieve alone... I'd rather you upbraided me with vehemence."

Forms of Christianity and Their Expression

This story speaks to greater truths. Charlotte Bronte ably shows how religion should be a tempering force for good but how compassion, mercy and reason often take a backseat to hypocrisy, cruelty, and extremism, displayed by the very people who claim to be believers and who should know better and show kinder qualities to a higher degree. Through skillful storytelling, Bronte explores the topic of how, in some situations, rigidly adhering to rules causes more harm than good. Jane Eyre ultimately makes a statement as to how the correct course may not always be the right course.

No discussion of Jane Eyre would be complete without mentioning Thornfield Hall and the real the manor house chosen for this movie. Haddon Hall, an imposing stone structure with paneling and passageways and set amidst lush greenery, added just the right touch of mystery and intrigue. Many viewers fell in love with the building and grounds, as seen in the movie, and have sought to learn more about this fascinating place. Dating from the 12th century, Haddon Hall is considered the finest example of a medieval manor house. Although an impressive structure that was built to withstand the test of time, restoration and conservation is an ongoing process, and great care is being taken to retain the originality and authenticity of the building.

Haddon Hall receives visitors from around the world and the revenue generated helps in the keeping this historical gem from deteriorating into oblivion.

Where is Haddon Hall? 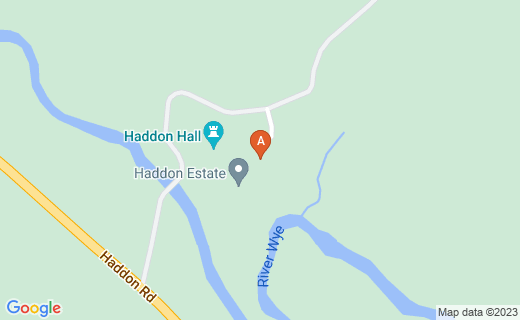 Have You Seen Jane Eyre?

Jane Eyre is a masterpiece, mirroring so many contrasts and human emotions: duty and pleasure, false and true morality, lack of love and the deepest expression of it, agony and happiness. This story is a timeless classic that speaks to the human condition and resonates with fans who have been willing to risk all for someone they loved. An enduring tale of love, loss, and redemption that has struck a chord with generation after generation.

What did you think of this film version?