What is Jazz Fusion?

Like most musical genres, fusion has evolved over time, and the word has come to apply to a wide spectrum of music. For purposes of this list, I use the term fusion in its original sense: jazz music mixed with the driving beats and electric instrumentation of rock, R&B and funk.

In the 1950s, when rock and roll was invented, it was derided by most jazz artists. By the late 1960s, however, the boundaries of rock music were expanding, and it seemed that nearly anything was possible within the rock format. Rock acts such as Cream and Traffic adopted the jazz philosophies of virtuosity and extended improvisation, and jazz influences were being heard from acts such as Blood, Sweat and Tears and Chicago Transit Authority (later shortened to just Chicago). Other artists, including The Moody Blues, Procol Harem and King Crimson went even further, adding elements not only of jazz but also of classical and world music, creating Progressive Rock.

The rock group Traffic, performing in 1973

The Birth of Fusion

All of this musical experimentation was still primarily rock music, with other influences added to it. The potential of fusing music elements in this way soon became obvious to some jazz musicians, as well. These jazz artists began playing jazz fused with the driving beats and electric instrumentation of rock, funk and R&B music. Like the progressive-rockers, some of these fusion artists also began incorporating elements of world music, particularly Indian music, into their sound.

The golden age of fusion coincided with the era during which rock music was also at its most adventurous and progressive, the decade from the late-60s through the late-70s. Neither fusion nor progressive rock went away after that, but this was the era when the greatest music in both of these genres was created.

Below is a list of some essential albums from fusion's golden age, from the artists who defined the genre. Each of these artists have recorded several albums over the course of their careers, some in more than one sub-genre of jazz. For each artist I've selected what I consider to be their best album in the fusion genre.

Some critics say that fusion started with this album, released in 1970, and it is unquestionably one of the most important early albums in the genre. Personnel on the album include future fusion superstars Chick Corea on electric piano and John McLaughlan on guitar. The sound is heavy, with two drummers and two bassists playing on every track, but the songs are definitely jazz. Davis' trumpet takes most of the solos, but Wayne Shorter (sax) and John McLaughlan (guitar) also get opportunities to shine. Miles Davis, an established and influential jazz artist for decades, received a great deal of criticism from jazz purists for Bitches Brew, but didn't care, and fusion remained an important part of his recordings and live repertoire for the rest of his career. 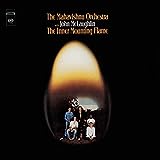 Featuring excellent guitar work from John McLaughlin (playing a double-neck guitar) and heavy drumming from Billy Cobham, The Inner Mounting Flame was clearly aimed at the rock listening audience of the early 70s. The album, released in 1971, also features Jan Hammer on keyboards, Rick Laird on bass, and Jerry Goodman on electric violin. Fans of the electric violin sound should also check out albums from Jean Luc-Ponty, a future member of the Mahavishnu Orchestra who would also record some excellent albums on his own, with Upon the Wings of Music being one of his best. 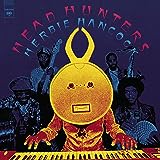 Like many fusion greats, keyboardist Herbie Hancock is an alumni of Miles Davis' band. Head Hunters, released in 1973, is from the funkier side of fusion, and was, for a while, the biggest-selling jazz album of all time (although it has since been surpassed). The album features prominent use of electronic synthesizers, played by Hancock, over heavy funk and R&B rhythms. Containing only four songs, the album is full of extended improvisations, but is actually more melodic than Bitches Brew or The Inner Mounting Flame, and for listeners new to fusion, it may be a better introduction to the genre. 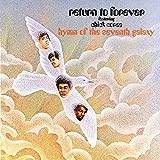 Return to Forever, Hymn of the Seventh Galaxy

Return to Forever was formed by yet another Miles Davis alumni, Chick Corea. An earlier album from the group, Light as a Feather, was a collection of softer, more latin-flavored jazz, with less emphasis on electric instruments. Hymn of the Seventh Galaxy, released in 1973, featured a different line-up for the group, with drummer Lenny White and guitarist Bill Connors joining Chick Corea and bassist Stanley Clarke. The result is a heavier rock sound, and one of the best fusion albums ever recorded. 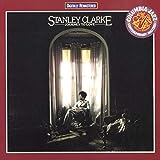 This 1975 album from Return to Forever bassist Stanley Clarke is full of funk and soul influenced fusion. Musicians assisting Clarke on Journey to Love include Chick Corea, Lenny White, John McLaughlan, and keyboardist George Duke. There's even some guitar work from Jeff Beck (who did two excellent fusion albums himself around this time: Blow by Blow in 1975 and Wired in 1976) and - obviously - some awesome bass playing from Clarke himself. 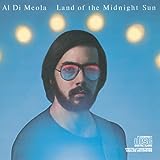 Al Di Meola, one of the great fusion guitarists, began his career with Return to Forever (although he was not yet a member when the previously mentioned Hymn of the Seventh Galaxy album was recorded). Musicians on Di Meola's 1976 album Land of the Midnight Sun include Stanley Clarke and Jaco Pastorius on bass, Lenny White and Steve Gadd on drums, and Barry Miles on keyboards. As with John McLaughlin's albums, however, it is the focus on electric guitar that makes the album accessible to rock fans. For variety, Di Meola also provides some very nice acoustic guitar work on Sarabande from Violin Sonata in B Minor, a Johann Sebastian Bach composition, and Short Tales of the Black Forest, written by Chick Corea.

The third great fusion group of the 1970s, along with the Mahavishnu Orchestra and Return to Forever, was Weather Report, who released several fusion classics throughout the 70s. I've chosen their 1977 album Heavy Weather for this list, primarily because of the bass playing of Jaco Pastorius, who went on to record many great fusion albums as a solo artist before his tragic and untimely death in 1987. The album also contains the classic Birdland, one of my personal favorites. Heavy Weather may be a little too slick and non-improvisational for some fans, especially compared to the sounds of their early-70s albums (all of which are also excellent), but this is another album that may be a good starting point for listeners new to the fusion genre.

Who Did I Miss?

Obviously, someone else's list of fusion essentials might differ from mine, but I think that most would agree that these artists and albums are all classics, and include some of the best music the genre has to offer. If you have a favorite fusion album or artist that you think should be on the list, use the comments section below to let me know.