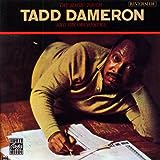 The Magic Touch
Author of modern jazz anthems like "Hot House" and "Our Delight," Tadd Dameron was among the finest composers produced by the bop movement, and certainly its greatest orchestrator, able to give a big band the litheness of a quintet or the sonic breadth of a large orchestra. His struggle with narcotics took an enormous toll, however, including imprisonment, and recording opportunities were few. This one from 1962 is among the finest products of his later career, with a big band of outstanding musicians playing some of his strongest charts, from the gorgeous trumpet sonorities of "Fontainebleau" to the pure bop of "Our Delight." Trumpeter Blue Mitchell, tenor saxophonist Johnny Griffin, and pianist Bill Evans are among the gifted soloists, and the band is driven through its paces by Philly Joe Jones, a truly great big band drummer (though he seldom assumed that role) and a longtime Dameron associate and supporter. --Stuart Broomer
Buy Now

This is a beginner to intermediate level arrangement of the famous jazz tune, Lady Bird. The chord chart and melody can be found on another site. I have been asked a few times about composing chord melody arrangements. I will explain as simply as I can, what I have done here.

Most songs can be arranged chord melody style, but the old standards are much easier to work with. This is because they have more intricate chord progressions and melodic lines than most pop, blues or rock songs. Many jazz tunes are not diatonic (contained in one key). Lady Bird is an example of this. The melody weaves in and out of a number of different tonal centres. This modulation (changing keys within a song), along with the chord forms, makes for some varied improvisation options. I have transcribed the chord progression, melody, then the chord melody line by line.

This the standard chord chart for the first four measures of the song. I have broken the song into four separate lines with four measures apiece (the original transcription had a two measure intro, this is the reason the measures start at three). The format of the tune is a sixteen measure blues jazz structure that keeps repeating. Overall chord structure of measures three and four is C Major. Measures five and six move to an F minor chord. F minor is not diatonic to C Major (F minor is not in the key of C Major). This is where the first modulation occurs.

The first modulation occurs at measure five and continues in the same key for measure six. The song moves from C Major to E♭ Major. Fm7 (the melody note, B♭, turns this chord into an Fm11) is the ii chord of E♭ Major, while B♭7 is the V chord.

The overall key centre for the tune is C Major (no sharps or flats). In measure three and four, the melody note is the highest voice of the chord, G. Underneath on the second, third and fourth strings, I have built a CMaj7 chord.

There is no root, C. In the chord chart the movement is from C Maj7 to C6. When composing this arrangement, I could have moved back and forth between the Maj7 and 6, but I wanted to keep this as simple as possible.

The chord progression for measures seven and eight is the same as measures three to four and is once again based on a C Major chord. Measures nine and ten are based on a B♭ minor chord. This chord imposes another modulation, since B♭m is not diatonic to C Major.

In measure ten, E♭13 and E♭7 have been substituted in place of B♭m7 and B♭m6, using the same guidelines as the previous section.

Measure seven and eight are an exact repeat of measures three and four. In these two measures, the tonal centre is once again C Major.

Measures nine and ten move into another key signature. This time it is A♭ Major. These two measures follow the same format as five and six. In measure nine, B♭m7 (extended to B♭m9) is the ii chord of A♭ Major.

In measure ten, E♭7 (extended to E♭13 and E♭9) is the V (dominant) chord of A♭ Major. Substituting the ii chord for the V chord (or vice versa), is very common. For example, in the chord chart, measures nine and ten are both B♭m7 to B♭m6. In the chord melody arrangement, measure nine is based on B♭m7, while measure ten is centred around E♭7.

Measures eleven and twelve move to A♭ Major. Measures thirteen and fourteen move a semitone higher to an A minor chord.

There is no substitution in these measures.

The melody moves into a descending chromatic line in measures eleven and twelve. This line is repeated a semitone higher in measures thirteen and fourteen.

Measures eleven and twelve remain in A♭ Major as their tonal centre. The chords loosely outlined here are A♭Maj7 and A♭6. I have transcribed this section as octaves. The line descends chromatically (one fret at a time) from B♭ to A♭. Employing octaves as opposed to single notes in one octave, adds a ‘beefier’ sound to the melody. Wes Montgomery was a master at this style of playing. Octaves can be played different ways. I use the hybrid method, pick and fingers.

The song moves back to the tonal centre of C Major in these measures. Overall tonality for measures fifteen, sixteen, and the first two beats of measure eighteen is D minor, resolving to C Major for the last two beats of the song.

In the same way as previous parts, G13 and G7 have been substituted for the Dm7 and Dm6 in measure sixteen. Measure seventeen is a total rewrite of measure seventeen in the original chord chart. I have substituted these chords to correspond with the chord melody. A very jazzy, descending chromatic line underneath the single melody note: G.

A simple diatonic descending line in C Major to finish the melody.

Measures fifteen and sixteen return to C Major. Dm7 is the ii chord and G7 (G13 in the first two beats of measure sixteen) is the V chord of C Major.

The last two measures outline the turnaround (in this case they act as the ending). If you want to repeat, end on a dominant chord (G7, G13, etc) and start at measure three. Measure seventeen and the first two beasts of measure eighteen are a descending chromatic run, with a G pedal point (a drone note) voiced on top of the chords. The Em7 shape moves down from the it’s original position to end three frets lower. This is a very cool sound.

This is the entire chord melody transcription.