Synopsis: The story of four young men from the wrong side of the tracks in New Jersey who came together to form the iconic 1960s rock group The Four Seasons. 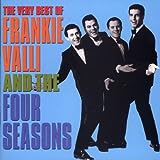 The Very Best of Frankie Valli & The 4 Seasons
Buy Now

Jersey Boys at the Tony Awards

- Musical numbers were good, and the film had an excellent transition into the songs

- Clint Eastwood manages to surprise us, by stepping out of his element to direct this feature.

- The brief glimpses into Frankie Valli's life were interesting

- The narration scenes provide deep insight into the characters themselves, and their perception of the events that transpire throughout the film.

- Although the parts focusing on Frankie's life were interesting, it doesn't go into as much detail about it, as one would hope.

- The story arc involving a rags to riches tale, about a band that allows their own weight of success to get to them, has been done various times before; which makes the movie a tad predictable.

"Jersey Boys" is probably one of the most underrated film of this year, as it still baffles me on how some piece of crap like "Think Like a Man Too" could possibly beat this film at the box office on opening weekend. Have people lost their minds? Oh well. Not much we can do about it, but I will say this. "Jersey Boys" is far from perfect, but it's worth checking out..

The film is essentially a biography about the popular "Jersey Boys" music group that features four guys from New Jersey. Each of them coming from the wrong side of the tracks, but they come together to create one of the most popular rock groups in pre- Beatles history known as "The Four Seasons." Some of you may have heard of some of their songs like "Walk Like a Man", "Big Girls Don't Cry" or "Sherry" to name a few.

The story was originally told on Broadway, and it even won a Tony award for "Best Musical." Not an easy feat to accomplish. However, it seems like Clint Eastwood has decided to adapt the Broadway biography onto the big screen. Like most movies that are adapted from Broadway, this movie carries a heavy emphasis on character interactions and character growth.. Not a bad thing mind you, but it may not appeal to some audiences.

Clint Eastwood uses the Four Seasons' alleged connections to organized crime, as a means to darken the story to create a lot of drama and friction within the group itself. Often, leading to some of the more dramatic moments throughout the film.

Throughout various parts of the movie, it breaks the fourth wall to allow each member of the group to narrate their side of the story periodically. This basically provides the film an opportunity to explain to the audience what each of the characters are going through, and what their true intentions are. Sometimes, the person narrating offers a bit of foreshadowing on what the audience can expect to happen next. Afterwards, they go back into the scene, and it plays out as if nothing happened. .

At first, it might seem a bit weird when you watch this film. However, for the kind of story that Clint Eastwood is trying to convey, it works rather well. Not only does this kind of storytelling provide deep insight into the characters themselves, but it offers an interesting take on the characters' perception on the events that transpire throughout the story.

However, that's not to say the story is perfect by any means. For instance, we're given brief glimpses into Frankie Valli's (John Lloyd Young) personal life, as it shows how the weight of success has somehow distanced him from his family over the years. Often, being forced to travel on the road a lot for concert tours to help promote his songs, but it forces him to neglect his wife and children on a constant basis. His daughter runs away at one point, and it seems like it's caused him to cheat on his own wife, during that time as well. We're never told exactly when he starts cheating on his wife, but it's fairly obvious being away from home so often has put a strain on their marriage over the years.

Even though we're given a few scenes here and there to provide insight into Frankie Valli's personal life, it never goes as far as one would hope that it would. Instead, majority of the focus is put on the interactions between the band members themselves, which wouldn't be bad thing per say; except for the fact that the story involving the Four Seasons' themselves fall into some of the same Hollywood cliches that one could expect.

You have a band that's desperate to get their big break, and they somehow pull it off to become one of the hottest music groups out there. Somewhere along the lines success starts to weigh in on them. Egos start to fly. Jealousy among the band incurs, and there's a typical falling out at some point as well. Only to lead up to them putting aside their differences at the end, when they're inducted into the "Rock and Roll" hall of fame several decades later. It's an interesting story, but it's a shame that it's one that we've seen a million times before.

As for the acting, I thought everyone played their parts rather well. The musical numbers were nice, and the transition to the songs flowed seamlessly throughout the film; even when the band was playing while one of them narrated the story.

The cinematography wasn't half bad, as it seems like Clint added a grey filter to make the story seem a bit darker. But overall, it seemed to work rather well for the film itself. Although, I wouldn't say this is Clint Eastwood's best work, but it's nice to see that he's able to step out of his element to show audiences that he's able to direct other genres of film.

Overall, if you haven't seen this movie by now, then it's worth checking out; especially if you're into musicals in general. The film isn't perfect by any means, but it's entertaining for what it tries to be.