For anyone who was around in 1978, Kate Bush's sudden and surprising rise to stardom was anything but predictable.

It was a time of polar opposites in popular music in the UK: punk rock on one side and disco on the other. Kate Bush belonged in neither camp. In fact, the variety in her sound and musical styles has since defied the constraints of just one musical genre.

It all began with Wuthering Heights, of course. Bush's musical interpretation of the Emily Brontë novel took the music world by storm and, more than thirty five years later, continues to be one of her best loved songs.

That track is included here in this personal retrospective in which I try to dissect Kate Bush's impressive back catalogue of 33 singles (so far) and try and accomplish the difficult task of highlighting just five of them. 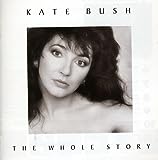 Released in 1986, this is no longer the whole story, but instead offers a wonderful overview of the biggest hits from Kate Bush from the first eight years of her career.

One way or another, Wuthering Heights captures your attention. In many ways, it was either going to make or break Kate Bush.

This, her debut single, was not to everyone's taste. Her voice was (and still is) like no other contemporary singer. For most of us, it was probably the voice we heard first, rather than seeing the singer to whom it belonged.

It was unusual enough to give it a second listening and conclude that it was either the mad shrieks of exuberant youth or the birth of a raw new talent in rock music.

Thankfully, the majority agreed with the latter and sent the song to Number 1 in the UK for four weeks in the Spring of 1978.

We soon learnt, though, that Kate Bush was no One Hit Wonder. She was not just a singer, but a performer in the full sense of the word. The dance, the drama and the look all combined to induce guys to lust after her and girls to want to be her.

Sat In Your Lap

By 1981, the video that accompanied a single release had become as important as the song itself. As you can see, this is where Kate Bush was able to let her creative inner eye run amok with the visual aspect of her talent.

Sat In Your Lap was included on her fourth album, The Dreaming, which garnered some criticism from some quarters in the press for its lack of commercial appeal.

Not so with this frenetic song. Full of pounding drums and a ferocious vocal, the track was a complete change in direction for Kate Bush. By this time, she had a lot more control over her output. It showed with this passionate composition concerning the power of knowledge and the exploration for wisdom.

The Man With the Child in His Eyes

One of Kate Bush's most mellow tunes is this one that she wrote when she was just 13-years-old. For someone so young, it shows a maturity in composition and was deservedly included on her debut album release, The Kick Inside.

Following the creative wonderment of Wuthering Heights was not going to be an easy task, but this exquisitely calm, yet warm vocal won Kate Bush yet more fans. It was her second Top 10 single in the UK and managed to scrape into the lower reaches of the Billboard Hot 100, following a performance on Saturday Night Live in the States.

Its beauty is in its simplicity of its storytelling and the maturity of its rendition..

Running Up That Hill

Seven years after Wuthering Heights, Kate Bush returned to the Top 5 of the British charts with Running Up That Hill, the debut single from her then new album, Hounds of Love.

Like the former, Running Up That Hill became a part of my record collection, this time in a special 12" vinyl release.

Its reliance on putting drums to the forefront was reminiscent of Sat In Your Lap, but it was probably a little more accessible for many listeners. Less frenetic, but no less creative, as Kate muses the possibility, in the name of mutual understanding, of making a deal with God to allow the sexes to swap roles.

Not your usual theme for a pop single; but this was Kate Bush.

(It also came with a rather good accompanying video).

Looking back, it's surprising that this cello-driven mini masterpiece was not more of a commercial success than it was.

Having said that, it was the second release from her UK Number 1 album Hounds of Love, so many fans would already have owned it. Nevertheless, it did manage to scrape into the lower reaches of the Top Twenty.

Kate's source material for the subject of the song is A Book of Dreams by Peter Reich, the son of a "cloudbuster" - a rainmaker - by the name of Wilhelm Reich, a psychoanalyst by profession. It was the special relationship between father and son that captivated Kate Bush and her musical rendition is as equally as captivating.

It was aided by a special video presentation. In fact, it was more than your usual run of the mill pop video: it was a short film. Donald Sutherland plays the role of Wilhelm and Kate plays his young son, both seen experimenting with cloudbusting. Their relationship is sadly broken by the arrest of Wilhelm, thought of as dangerous by some.

Which of these Kate Bush songs is your favourite?

Do You Have A Favourite Kate Bush Song?