I must start by declaring my position. I am an ardent fan of Katharine Hepburn. The title of this piece is no accident. I really do think she is the greatest actress ever, and in the following paragraphs I hope to persuade you too!

Longevity alone might have enshrined Katharine Hepburn as one of the cinema's greatest actresses. She was so remarkable she may have given the misleading impression that Holllywood is only interested in old people when in fact, the reverse is true. Her career as a leading lady spanned seven decades, with over fifty films, many of them of the highest quality. She won a record four Oscars, three of them after the age of sixty, and she received a total of twelve nominations, another record. It is hardly surprising that her position on the AFI list of Top Movie Actresses is an unassailable number One.

Katharine was not only one of the very finest actresses to work in Hollywood, but one of the most unlikely Hollywood stars. She was not, for one thing, conventionally beautiful, although she could, of course, appear quite ravishing. She was slender without being skinny. She could make the best of a dress like any young Hollywood starlet and she also looked fantastic in slacks and shirt. She was often described as androgynous and she certainly had an almost masculine air of strong-willed independence, the self-confidence and intelligence born of a well-heeled, well-educated, upper-crust New England upbringing.

The daughter of a surgeon father and a suffragette, feminist mother, Katharine was born Katharine Houghton Hepburn on May 12, 1907, in Hartford, Connecticut. She was the second of six children, and grew up as a straight-talking tomboy, hard-working, sporty, intellectual and devoted to her older brother, Tom, but awkward with people outside her family circle.

A defining event in her young life came when she was 12. On a visit to stay with their aunt in New York, she and Tom went to the theatre to see a play which contained a scene of a hanging. The next morning, Katharine discovered her brother hanging from the rafters by a bedsheet, already dead five hours. He was 15. Believed to be a stunt gone wrong rather than a suicide, the tragedy deeply traumatised Katharine.

Katharine began acting as a teenager even before going to study at Bryn Mawr College. A year after graduating in History and Philosophy, she was playing bit parts on Broadway, although her career proceeded in fits and starts due to an outspokenness that provoked arguments with various directors and producers. This was a trend which would continue all her life.

In 1928 Katharine married Ludlow "Luddy" Ogden Smith, a New York socialite whom she met at a college dance. The marriage was not a success and after several separations, ended in divorce in 1934. Smith continued to help Katharine financially and they remained lifelong friends.

Katharine spent several years learning her new profession on the New York stage. Her first leading role was in a production of 'The Big Pond', which opened in Great Neck, New York. She was terror-stricken and got fired for fluffing her lines. Nevertheless she persevered and in 1932, was chosen to play Antiope the Amazon princess in 'The Warrior's Husband' (an update of Lysistrata). Her performance got rave reviews and brought her to the attention of Hollywood in the form of director, George Cukor, who was to become a lifelong friend and mentor.

At Cukor's urging RKO signed her in 1932 to play John Barrymore's daughter in 'A Bill of Divorcement'. She had fine notices, and RKO signed her to a new contract.

A year later Katharine won her first Oscar with 'Morning Glory', and also in 1933, she cemented her burgeoning reputation by magnificently playing Jo in in the screen adaptation of 'Little Women', which was a major box-office hit. Two poor films came next: 'Spitfire in 1934 and ' The Little Minister' in the same year. But she was brilliant in 'Alice Adams' and then in 'Sylvia Scarlett' masquerading as a boy, both in 1935.

The standard of Katharine's films dropped with the disappointing 'Break of Hearts' in 1935, 'Mary of Scotland' and 'A Woman Rebels' in 1936, but during the next two years came four classics in a row: 'Quality Street' and 'Stage Door' in 1937, 'Bringing Up Baby' and 'Holiday' in 1938. It is noteworthy that in the last two she co-starred with Cary Grant, an actor who brought out the best in Katharine as Cukor did as director.

Despite these successes, Hollywood seemed wary and unsure of her commercial potential. She was just too different. For some years in the 1930s she was regarded as 'box-office poison' by the movie moguls, who didn't really know how to respond to, let alone use, her intellect and honest, no-nonsense approach.

Katherine was one of the front-runners for the much-coveted role of Scarlett O'Hara in 'Gone With The Wind' but missed out, according to the producer, David Selznick, because she couldn't convey the sex. Undaunted, Hepburn commissioned a new play from Philip Barry, author of 'Holiday' (using money from Howard Hughes and her ex-husband, Ludlow Ogden Smith ), played the Tracy Lord part in the Broadway smash hit, and then sold the property to MGM with herself and Cukor. The studio wisely added Grant and James Stewart and made 'The Philadelphia Story' in 1940. She was rewarded with a movie masterpiece, a box-office hit, and another Academy Award nomination.

Amazingly, MGM were still unwilling to sign her up, and only in 1942, after 'Woman of the Year', the first of her comedies with Spencer Tracy did they put her under contract. And no wonder, for in that film she is at her majestic best, beautiful, full of confidence, absolutely breathtaking. 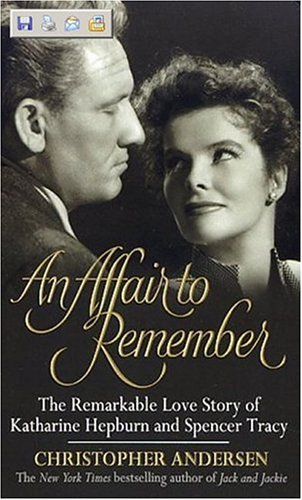 Affair to Remember, An: The Remarkable Love Story Of Katharine Hepburn And Spencer Tracy
Buy Now

In 1942, Katharine met Spencer Tracy on the set of 'Woman of the Year’ and their love affair began. Apart from their shared talent for acting they were very different. Tracy came from a working class background and he battled throughout his life against his alcohol addiction. They spent 25 years and made nine films together.

Tracy had been married to the former Louise Treadwell since 1923, a Catholic and family man, he never divorced. He claimed "my wife and Kate like things just the way they are," and the truth or otherwise of this remained between the three of them, never publicly discussed. He also felt a tremendous sense of guilt about his deaf son, John. So marriage was out of the question, but Kate didn't care, she just wanted to be with Spencer.

Hepburn and Tracy carefully hid their affair from the public, using back entrances to studios and hotels and assiduously avoiding the press.  Their relationship was complex and there were often periods of estrangement. Hepburn had had several prior liaisons, most notably with her agent Leland Hayward, and the directors John Ford and Howard Hughes. Tracy had a brief affair with Gene Tierney in the early 1950s. They were undeniably a couple for decades, but did not live together regularly until the last few years of Tracy's life when Hepburn quit acting to nurse him. Even then, they maintained separate homes to keep up appearances.

After meeting Tracy, Katharine started filming less frequently.  Perhaps because of Tracy Katharine was mellowing and there seemed to be less fire, less spark in her performances. She made a string of average movies such as 'Keeper of the Flame' in 1942 with Tracy again, 'Dragon Seed' in 1944, 'Without Love in 1945, another comedy with Tracy, 'Undercurrent' the following year, an odd psychological drama with Robert Taylor and Robert Mitchum, striking but not convincing; 'Song of Love in 1947 as Clara Schumann; and 'The Sea of Grass' also in 1947, again with Tracy.

Adam's Rib, made in 1949, is probably the best film which she and Tracy made together. They play a husband and wife working as opposing lawyer on the same case and it is genuinely funny and sharply witty on the subject of the gender war.

Katharine's image would evolve again in the 1950s and 1960s, when she began to diversify her acting output.

After another blockbuster hit in 1952 with 'The African Queen', co-starring in a dynamic partnership with Humphrey Bogart, for which she received her fifth Best Actress nomination, she appeared in the worthy 'Pat and Mike' in the same year but 'Summertime' three years later was of a sickly, sentimentality which the Katharine of the 1930s would have scorned.

Her next few movies were also disappointing: 'The Iron Petticoat' in 1956, with Bob Hope, The Rainmaker' later that year, 'Desk Set' in 1957 with Tracy all suggested that Hepburn was being sidetracked. She was - by her first love, the theatre. On the London stage, she appeared in three Shakespeare plays in 1955, and toured with them in Australia. In 1957 and 1960 she appeared in four more Shakespeare productions in Stratford, CT.

Many of Katharine's movies in the later stages of her career were theatrical or literary in origin and tone, - 'Suddenly, Last Summer' in 1959, 'Long Day's Journey into Night' in 1962, and 'The Trojan Women' in 1971 - but the tone was different from her early work. She was acting a role rather than playing herself, and the movies suffered because of it. The same could be said of 'Guess Who's Coming to Dinner' in 1967, for which she won her second Best Actress Oscar. She always claimed this was a joint Oscar with Tracy who had been nominated and who died shortly after the film was released.

Monologue from 'The Lion In Winter'

Katharine's third and record-breaking fourth Best Actress Oscars were for, The Lion in Winter, in 1967 and 'On Golden Pond' in 1981, co-starring Henry Fonda. She also starred in her first and only Broadway musical, Coco (1969), and did such made-for-television plays as Love Among the Ruins (1975), with Sir Laurence Olivier.

Hepburn died of old age at Fenwick, the Hepburn family home in Old Saybrook, Connecticut, on June 29, 2003 . She was 96 years old, and was buried in Cedar Hill Cemetery, Hartford, Connecticut. In her honour, the lights of Broadway were dimmed for an hour.

Katherine Hepburn was a strong, uniquely talented lady. For parts of her career, particularly from 1932 to 1945 she consistently displayed the ability to be the most interesting, difficult and challenging person, male or female, that we have ever seen in motion pictures. She revealed a brilliant, brittle talent for both comedy and darker, more serious drama and her deft timing, her nuanced subtlety, her character, wit and her mercurial intelligence remain undimmed to this day.


The golden age of Hollywood has gone and with it, the golden stars. Katharine was the last of the great stars, the very last.  In her long and legendary life, Katharine Hepburn was a role model whose personality resonated beyond the screen and across generations, feisty, and fearless. It resonates still, today.