La La Land isn't your ordinary musical. It's a whimsical romance that sweeps you out of your seat and into the film itself, making you feel the love, music, and happiness that is floating in the air. The film isn't something to just be watched or seen, but rather has a life of its own and that is what makes it a truly great film and a truly great musical worthy of being grouped with the classic musicals of old.

The story follows aspiring actress Mia, played by Emma Stone, who had a less than desirable first impression of struggling jazz pianist Sebastian (played by Ryan Gosling). The two give their meeting a second chance and a beautiful relationship blossoms from it.

The story is rather simple. Some might even say predictable. But what makes La La Land so great is its beauty. Not just the music or singing but also the care that was put into the sets and surroundings. Take the planetarium scene for example (pictured above) or the dance in the park. There's so much brilliance and emotion put into the environment surrounding the characters that it's almost as if the scenery is telling a story too.

The music was delightful and gave a pleasant upbeat feeling. Even if you closed your eyes and just listened to the music, you could gain serenity and a sense of calm. La La Land is the very definition of a "feel-good" movie.

In conclusion, I can't brag on this film enough. Every moment, every musical number, every dance scene, every second was an absolute joy. The acting was wonderfully well-done and it really connected with the audience. It was down-to-earth and human all the while being a serene fantasy. I give the film a total score of 4 stars out of 4 stars. 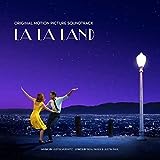