"La Carta Imaginaria" (The Imaginary Letter) is an opera by Oscar Edelstein in the form of a musical poem about that which is written and that which is not - illusion, error and destiny.

The production was both conceived, written (libretto and score) and directed by Oscar Edelstein and designed specifically for the historic space of the Sala Williams which was once the main hall of the National Library of Argentina.

With Acoustic Theatre, Edelstein is motivated by his investigations into what he calls “the theatre of memory” which is a study of the lines between memory, imagination, perception, creation, and composition.

For Edelstein Acoustic Theatre helps to build his knowledge and control of spatial qualities; the perception of the movement and location of sound, or for example the qualities of reverberation, diffraction and echoes. It is the strategy that he uses to think, notate and create his varied musical and cultural production. He uses it in order to bring into play the imaginary, literary, and philosophical configurations and generation of a sense of space.

Essentially, Acoustic Theatre traces the relation to music, theatre and performance, from the early acoustic experiments of the Venetian masters up to references of the to the 3D space of Karlheinz Stockhausen, passing through Mahler, Wagner, Debussy, Schónberg, Geörgy Ligetti and Luigi Nono.

In an interview with Diego Fischerman, music critic for Pagina 12, Edelstein explains the ideas behind "La Carta Imaginaria";

“La Carta Imaginaria works around the problem of destiny and repetition, planted as a game of violent children who are condemned to repeat the same history... It also deals with a reflexion on that which is written and not written, which relates to destiny and how it is translated to the score. [...] Not to disown the authorship, but a work of this kind is the result of quantities of stimulus and ideas that come up in the interpretation. And the interaction between many people that have distinctive styles, different strategies and professional fields: singers, instrumentalists, lighting designers, costume makers. The opera, as in the theatre, is a collective act. I’m interested in this conflict. The transference between the arts, unless you adhere to the conduct of very established genre, needs a certain freedom, a certain expansion, in which inevitable leads to some error of calculation, nevertheless, ends up being part of the truly creative.”

“To remember is to make yourself anew. To know is to become rigid. To create is to remember, without knowledge, something that never happened.”

Oscar Edelstein is an original contemporary composer from Argentina, well known for creativity and inventiveness, and frequently described as leading Latin America's avant-garde.

He is a pianist, conductor, and researcher whose compositions are both acoustic and electro-acoustic. Alongside orchestral and ensemble works, he has made over forty works for theatre and dance, and over fourteen operas including "Los Monstruito" that was commissioned in 2006 by the experimental wing of Buenos Aires' opera house, Teatro Colón.

Natalia Cappa is a soprano with training in contemporary music. She performed in Edelstein's multimedia opera "El Caballo Fantasma."

Lucas Werenkraut is a tenor working in both contemporary and ancient music. He was the third lead in Edelstein's "Los Monstruito'", and the lead in "El Caballo Fantasma."

Deborah Claire Procter is a singer, performer and multimedia artist from Wales. She has worked on several projects with Oscar Edelstein including "El Caballo Fantasma" and "Rivers and Mirrors: Part I."

Edgardo Palotta is a director who has worked many times with Edelstein as a director (such as in Los Monstruito and one of the presentations of La Teoría Sagrada del Espacio Acústico) and as a musician. This is the first production where he also played a part as an actor

La Carta Imaginaria was staged in the Centro Nacional de la Música, which has four halls. Edelstein used the unusual hall of the Sala Williams - famous for being the former main reading room of the national library which was at one time under the direction of archetypal Argentinean author, Jorge Luis Borges.

The space has 540 m² and is square in formation. It's breath taking cupola of nearly 30 metres whilst creating an acoustic challenge, gave an added resonance to the themes of memory and destiny in the performance, and a visual perspective to the live performance which was impossible to capture in the video and photographic documentation.

The lighting design of Fernando Chacoma in one key moment drew attention to the splendid and gold adorned dome, giving the audience the sensation of being suddenly in a vast cathedral.

For Edelstein, the production was a return to this iconic space, as in 2006 he worked with multimedia artist Deborah Claire Procter to make the video for Rivers and Mirrors: Part I, working with leading dancer Sandra Grinberg of the Trisha Brown Dance Company. Thus part of the video material for La Carta Imaginaria was an echo of material already created in the Sala Williams for Rivers and Mirrors: Part I.

Another evocative aspect of the hall with it's empty book cases, are the wooden panels with gold lettered lists of names of famous authors and thinkers than run from Goethe to Locke, and Spinoza to Kant.

Between Written and Un-written

To go along with the themes of the opera, Edelstein worked with traditionally scored music, open scores and graphic scores.

The ensemble trained together extensively with Oscar Edelstein and musical director Edgardo Palotta to achieve a balance between formal and informal lines.

“However much I am inside the field of the contemporary music, I have always felt like a popular musician who studied. I always take care to explore the music from the point of view of the sensitivity and emotion." Oscar Edelstein (2007)

The music of Oscar Edelstein is in the lineage of the composer Juan Carlos Paz (5 August 1901 – 25 August 1972) who is in part is famous for being the person who introduced the Second Vienna School to Argentina, and was an early supporter of North American composer Charles Ives. He was the polar opposite of the music school epitomised by Alberto Ginastera whose approach could be summed up as "a la Bartok" and a creative process starting in an idea of the folkloric.

In the 1920s and early 1930s, Paz is said to have made music that was post-Romantic, with influences from César Franck and Richard Strauss. Later he is said to have taken on influences from Igor Stravinsky's neoclassicism and jazz, until a further was "marked by atonal melodic idiom and polytonal harmony" according to Slonimsky. This was in particular an interest in Arnold Schoenberg's "twelve-tone technique", alongside the music of Anton Webern.

Paz is probably most famous in mainstream cirlces for having been the harmony teacher of Lalo Schifri (best known for the film score to "Mission Impossible"). Schifri studied piano with the father of Daniel Barenboim, going on to play piano with Piazzolla and writing for Dizzy Gillespie.

It was Paz who brought a new avantgarde energy to the composing circles of Buenos Aires and founded the group "New Music". In 1980 Edelstein was invited to be a member, and a short time decided to form a splinter group called "Other Musics."

Edelstein wrote an opera in tribute to Paz which was inspired by the graphic design of Paz’ score, "Seis eventos" [Six Events] – his last work that never musically realised. Edelstein says “I was interested in the moment when Paz chose, instead of the precise path, the labyrinth. I wanted to create from that act, from that “fact.”

This was the first work to pay homage to the famous Argentine composer. In a sense it was a tribute to the teacher he never had because as a young student Edelstein traveled from the Argentinean province of Entre Rios to Buenos Aires. At that time this was a long journey involving crossing the river Paraná, South America's second-longest river, and its name is drawn from theTupi language, meaning "like the sea" due to its width. Entre Rios is literally the province "between rivers". Before a tunnel was built this journey could take days simply due to the queues of cars waiting to take the ferry crossing.

Edelstein came with a letter of recommendation from the poet Juan L. Ortiz who spent his later years in Paraná. However when Edelstein arrived in Buenos Aires Juan Carlos had taken ill and was never to recover.

The dreams of studying with Paz were put on hold until Edelstein returned to Buenos Aires to study with Francisco Kröpfl who was himself a student of Juan Carlos Paz.

In an article in the La Nación in 1997 Kröpfl, in remembering 100 years since the birth of Paz, recalled anecdotally that the father of Paz had been a choral director from Spain and his mother Argentinean. Paz was a pianist and also studied the organ.

With some irony, Edelstein often notes that he was born a village called "La Paz" - on many levels Paz was his true north as a composer.

The opera, "El Hecho" was made by Edelstein as a tribute to Juan Carlos Paz.

In the last year of his life Paz drew a graphic score that left his followers confused as to his intention. It was his last work, mysteriously made a few months before his death, and was never musically realised.

This was the first extensive work to pay homage to the famous Argentine composer.

It was originally programmed for Experimenta' 97 but was finally first staged in the La Trastienda (June 1998) and then re-staged in Experimenta' 98 and in a long run at El Galpón del Abasto (October 1998). A production was produced in Portuguese in Brasilia, Brazil.

Other key operas by Oscar Edelstein

Other Work by Oscar Edelstein

Though only a fraction has been recorded, Edelstein has an extensive output of works and accolades. He is frequently consulted on major award panels.

“A revolutionary group in more than one sense… One of the most important musical events of the Argentine production of last times.” Diego Fischerman, Página 12 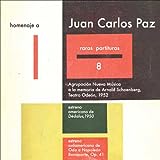 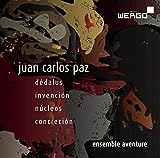