Sometimes a person just leaves you in awe..

Every once in a while, a person will come along that makes you think to yourself "wow!" If only I could go through each day and just share gifts that I have with the world and be thankful for every minute. Sometimes a person will inspire you to further greatness, just by being who they are.

A man named Leslie Lemke is such a person. Born in Milwaukee, Wisconsin back in 1952, this little baby developed retinal problems and glaucoma and had to have his eyes surgically removed. He was brain damaged and very ill, and given up for adoption by his Mother who could not care for him. The county he lived in asked May Lemke, a nurse-governess they knew about, to take him in and care for him.

She had already done a fantastic job raising her own five children, and was about to face one of the toughest challenges of her life raising this one. But she did it with grace and spunk and a LOT of patience... and I would have to say that May Lemke is ALSO an inspiration. Without her, this story may not have had "wings". She was indeed the wind beneath Leslie's wings.

She taught him how to eat and swallow, strapped him to herself to teach him to take steps, one by one.. until eventually he could walk on his own. She introduced him to the piano at a young age by putting his hands over hers while she played. He seemed to love music and sounds and had an amazing memory for recalling music and conversations. And May must certainly have been blessed with abundant, seemingly unending patience.

One night when she and her husband, Joe, had gone to bed, they awoke to piano music and May thought that Joe must have left the television on. But it wasn't the television at all, it was Leslie, sitting at the piano in the middle of the night (it was always night to him never having seen daylight). She recalled falling to the floor and thanking the Lord for giving this child such a miraculous gift of talent! She had always prayed for the Lord to show them what it was that Leslie was put here to do, the Lord let them know in no uncertain terms with this amazing gift that Leslie was born with!

Leslie has a very rare condition, called "Savant Syndrome," which has been described as "islands of genius in an otherwise severely mentally handicapped person." It seemed that he could simply hear a song just one time and play it back flawlessly, even something as long and complicated as a piano Concerto!

The wire service picked up on the story of Leslie, and Walter Cronkite featured him one night on his CBS Evening News one December. Soon afterward, other programs such as Oprah, "That's Incredible" and Donahue featured him and his awe inspiring talent, and not long after that a segment was done on 60 Minutes in October of 1983.

Since then, Leslie has made appearances throughout the United States , and has even performed in Norway and Japan. Still today, he continues to give concerts at nursing homes, churches and even a prison.

Unfortunately, May developed Alzheimer's, but she vowed that he would never be placed in an institution, and he never was. Even as her Alzheimer's progressed, she would still hear him play and have a moment where she would say "that's my boy!" He seemed to even be able to touch her when she was struggling through the fog of Alzheimer's.. he could give her small moments of clarity. May passed away at her daughter Mary's home in November of 1993, but to this day, Leslie has stayed in Mary's home and continues to be cared for by her. She continues to carry on "May's miracle" unselfishly, and for that, I know that I for one am truly grateful.

There was some concern when first Joe passed away, and then May, that Leslie would stop his music, but thankfully, he hasn't. Music is his language, his communication with the world, his way to reach people, connect with them and inspire them. Leslie has been called one in a billion because he is a so-called "prodigious savant," a handicapped person whose skills would be remarkable if they occurred in a normal person, but his condition is so extremely rare that there have probably been only 100 people like him in the last century.

Doctors have tried to "explain" his condition, but I think that May described it best in an interview one time "I think, because the brain was damaged, a part of the brain - the musical part - God left perfectly healthy and beautiful so Leslie could have a talent." What an absolutely wonderful way to describe how Leslie does what he does!

I pray that God will continue to watch over Leslie until the day that he calls him home to be reunited with May and Joe... and what a wonderful concert there will be playing in heaven that day - spectacular and beautiful and... heavenly! God Bless you, Leslie Lemke, and Mary for continuing to care for him. And thank you, Leslie, for being such an incredible inspiration! 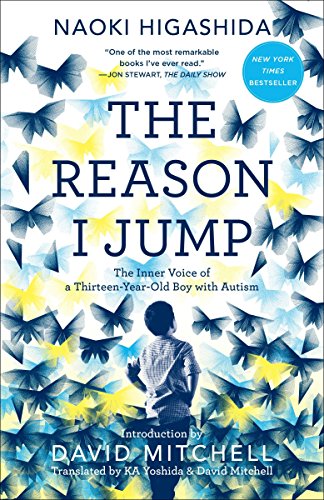 The Reason I Jump: The Inner Voice of a Thirteen-Year-Old Boy with Autism
Buy Now