Liberace. The Man and the Movie

Young Walter Liberace with his parents, Salvatore, and Frances

In Wisconsin May 16, 1919 one of the most famous entertainers of the 20th century, "Liberace" was born and christened, Wladziu Valentino Liberace. His parents were both emigrants, his mother, Frances Zuchowska, was from Poland and his father, Salvatore, was from Italy. Unfortunately, Liberace's twin brother died at birth and therefore all the grief of his lost brother was transformed into love and bestowed upon young Liberace, who was called either Walter or Lee. As a child he was dotted upon by his parents. His middle name was given him due to his mother's adoration of the handsome movie idol of the silver screen, Rudolph Valentino. Both of his parents were interested in music, his father played the french horn in theaters and concert halls, and and the music loving couple had their son taking piano lessons while barely past his toddler stage, and by the age of 7 he was showing signs of a true classical musician.

The couple took their talented son to music concerts and did all they could to influence their son's love of music and natural talent.

Liberace in the 1950s and His Signature Candleabra

While still in his teens Liberace was performing in professional orchestras. By the age of 16 Liberace was appearing as a soloist with the Chicago Symphony Orchestra.

The precocious teen had found a way of earning money that his classmates could not fall back on. Liberace began playing in movie houses and night clubs using the stage name, "Walter Busterkeys" and earned a decent living for a young man as soon as he was old enough to earn a living.

In the 1940s Liberace was featured in shorts and "soundies" that were played as filler in theaters in between double features. He was also quickly becoming famous as a radio star as he was now a classical pianist who also dabbled in pop music.

It was also around the late 1940s that Liberace added the candelabra that would become his signature trademark.

Liberace In An Early Photo With Scott Thorson

His big break came with the premier of The Liberace Show in 1951. It was a local television show that became so popular that it went national just a few years after its humble beginnings. Audiences were glued to the show and were touched by Liberace's child-like charm and honest devotion to his mother. Although Liberace was gay it was not widely known at the time of his musical show and women absolutely loved him. Liberace seemed like the ideal man. Many of his live concerts were sold out during the mid 50s due to his excellent showmanship and his personal charm. The majority of his audience were single women. At this stage of his stardom Liberace chose to milk the fact that women adored him. He, as many other gay stars before, was extremely attractive to females who were fantasizing about some day marrying the great Liberace. In the same fashion of Williams Haines, the First Gay Movie Star, Liberace did not wish to marry a woman and lead a completely straight lifestyle for publicity sake, but he did not flaunt his sexuality either. He preferred to keep his private life as private as possible.

He also liked the fantasy and confusion of mixed messages such as his famous published interviews that set female hearts on fire such as, The Kind of Woman I Want to Marry, and Mature Women Are Best, while apparently not dating anyone. 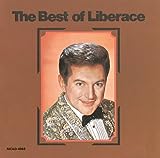 The Best Of Liberace
Buy Now

The Great Showman In White Fur

Behind the Candelabra
Buy Now

Liberace's star was growing at a steady pace throughout the 50s and when he starred in the film, Sincerely yours, which greatly showcased his talents, Liberace became the king of Las Vegas, and the top earning Vegas performer. As his television show eventually lost popularity to other musical shows such as the long running Lawrence Welk Show, Liberace continued his Las Vegas performances and steadily gained popularity. When Elvis Presley met the master pianist, he was so impressed with Liberace's flashy attire that he himself began to wear elaborate costumes on stage.

Homosexuals of the 1950s and 60s were a lot more like heterosexuals, they did not flaunt their private life or make their sexual orientation become center stage. Liberace had obviously feminine ways and began wearing things that no straight man would be caught dead in, but he did not wish to be called "gay" by the press or have his private life become front and center. After a British paper insinuated that Liberace was gay the piano kings sued the paper for libel and won.

In 1982 Scott Thorson sued Liberace claiming that he had been Liberace's lover and the great performer had promised to take care of and support him. The case was settled out of court, but the fact that a male had come out publicly about a relationship with the great showman, solidified what was always just speculation about the famous piano man. As interest in sexual orientation, gay lifestyle and AIDS were all becoming focal points of the news, Liberace was not officially viewed as "gay." The innocence of the public, that there could be a flamboyant man who is not gay was squelched, and after the death of Rock Hudson from AIDS, gay lifestyle was now openly talked about.

Rumors began circulating in the mid 1980s that Liberace had AIDS, due to his extreme weight loss and gaunt face. He and his staff denied the rumors and Liberace went on making television appearances. On February 4th, 1987 Liberace died at the age of 67. Newspapers quickly reported the cause as cardiac arrest, but a later autopsy confirmed that he actually died of AIDS related pneumonia.

Several Months Before His Death on The Opra Winfrey Show

Behind The Candleabra, The Movie

The movie is a serious account of the master showman and his life during the time that he was acquainted with Scott Thorson. Because the book was given reviews that were all over the place, some saying it was interesting and well written, and an equal amount of readers panning the book as ponderous trash, just what the movie will focus on is a bit of a mystery. Although we do know that Rob Lowe plays the part of Liberace's plastic surgeon, a man of whom little is known about today, but who played an important role in the life of the greatest showman of the 20th century. Liberace was a handsome man who placed a great deal of importance on his physical appearance as most celebrities do. The peculiar thing about Liberace and his plastic surgeon is that "Lee" as Scott called him, wanted his young lover to have plastic surgery in order to alter his doughy features into the sharper, and more angular ones that he himself had. Scott believed that his lover wanted to turn him into a younger version of himself.

The plastic surgeon apparently looked as plastic and pulled as many modern Hollywood stars, and gave Liberace a botched facelift that resulted in the great pianist losing the ability to close his eyes.

The Real Liberace and Michael Douglas Playing The Great Showman

Debbie Reynolds has a great part in this movie as Liberace's mother. Debbie has associated with Liberace numerous times throughout her career, and has even met his mother, Frances Liberace on several occasions. Who could possibly be better suited to play Liberace's mother than someone who has actually met the woman and observed her mannerisms? For Debbie Reynolds fans it is important to know that she may be hard to spot in the movie. Not because her part is so small, but because she looks so physically different than she does in real life, and speaks in the heavy Polish accent that Frances was hampered with, that without knowing this ahead of time, one may never know that they are actually watching Debbie Reynolds putting on a grand performance.