This Top Ten Song list is brought to you through a combination of various Billboard Charts, sales records, and popularity. It can vary by social and economical factors. Although, there are many popular songs of the "time" not listed, the songs that made it to the top are a reflection of the mainstay music.

No matter what, music is meant to be enjoyed by all. I hope you enjoy this 1960 Top Ten list that follows.

I’m Sorry is the hit song by a fifteen year old, Brenda Lee. It hit number one on the Billboard Hot 100 singles chart in 1960. It was called one of the “finest teen pop songs of its era”. In the United Kingdom, it hit the charts at number twelve.

There was concern before releasing the song by the record company that it might not be appropriate for a fifteen year old to be singing about unrequited love. Once it was released, all fears were vanquished, it was a hit and accepted by all, if for no other reason, the beautiful voice from a child. It drove all the charting systems crazy.

Chubby Checker’s version of the “Twist” gave birth to the Twist Dance Craze. His simple single became an overnight hit reaching the number one spot on the Billboard Hot 100 in 1960 setting a record for multiple chart toppers. Much later, in 1988, the song hit the charts again when the Fat Boys recorded it and included Chubby Checker as a special feature. It also went wild in the United Kingdom and Germany.

Billboard Magazine was so impressed that they declared it the “biggest hit of the 1960’s.”

Save The Last Dance For Me

Connie Francis brought Everybody’s Somebody's Fool to the top of charts all over the world in 1960. Even in Germany, Connie Francis did a German version, “Die Liebe ist ein seltsames Spiel” which went to number one there.

Everybody’s Somebody’s Fool was written more as a ballad with a bluesy feel and was recorded with the Joe Sherman Orchestra. It is especially called out because of its organ intro.

Originally, Everybody's Somebody’s Fool was meant to be the “B” side of the single record.

Itsy Bitsy Teenie Weenie Yellow Polka-dot Bikini performed by Brian Hyland and recorded by an orchestra conducted by John Dixon made quite a stir back in 1960, and still is lauded as an influential force even in today’s modern world.

Itsy Bitsy Teenie Weenie Yellow Polka-dot Bikini skyrocketed to the number one position on the Billboard’s Hot 100 charts and fared well in both United Kingdom Singles Charts and also in New Zealand (much to the chagrin to a more conservative attitude of the time).

The catchy song impacted bikini sells and also impacted many beach and surfing movies at the time. For the first time, it became acceptable, even though it was thought too “risque”, to wear bikinis in open public situations.

Please Help Me, I'm Falling In Love With You

Please Help Me, I’m Falling was co-written by Hal Blair and Don Robertson and then recorded by country artist, Hank Locklin. This single ended up being Locklin's most successful song and was his second number one hit on the country charts, spending fourteen weeks there. At one point, even though Locklin was known as a country singer, his song crossed over into the Hot 100, peaking on the charts at number eight.

I Want To Be Wanted

I Want to Be Wanted was sung by Brenda Lee and became a number one sensation and hit in United States during 1960. It made its way to the top of the Billboard Hot 100 singles chart and remained there for one week. I Want To Be Wanted is an Itaiian Love Song and was in the original version of “Never On Sunday”. I Want to Be Wanted was Brenda Lee’s second huge hit right after her number one hit, “I’m Sorry, which came in at the top of the top ten.

I Want to Be Wanted was also covered by Andy Williams and Olivia Newton John.

Tell Laura I Love Her

Tell Laura I Love Her was recorded by Ray Peterson and written by Jeff Barry and Ben Raleigh. It became a hit on American Top Ten Popular Music charts. Later in the year it was also recorded by Ricky Valance in the United Kingdom where it hit the number one spot on the United Kingdom Singles Chart. Tell Laura I Love Her sold over seven million copies.

The song is a tragic story about a teenage boy is is madly in love with a girl named Laura and wants to marry her. The boy enters a race to win the money so he can buy a wedding ring, but he crashes and dies. In the end, Laura goes to chapel and hears his voice.

Shop Around was written by Smokey Robinson and by Berry Gordy. It became a hit in 1960 when recorded by The miracles. It reached number one on the Billboard Rhythm and Blues chart and the number two spot on the Billboard Hot 100 chart.

The song is about a mother giving her song advice about “shopping around” for a wife.

Shopping Around was the Miracles first number one hit and spent eight weeks on the top of the charts. It was also their first million selling record.

Walk, Don’t Run is the first album by the Ventures and was released in 1960. It was recorded in a home studio. The Ventures earned a gold record for selling over 500,000 copies. Walk, Don’t run peaked at number eleven on the Billboard Charts. The Ventures received three gold records over the years of their recordings and performances.

Which of the top ten do you favor the most? 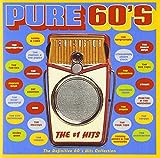 Thanks for stopping by and checking out the 1960 Top Ten Music list and videos. I hope you have enjoyed. Please feel free to leave your comments below. I'd love to hear your take on the 1960's music and what it meant to you. Be sure to check out our other top ten list.

Hope you have a good one, and, rock on!