By the middle 1980s, hard rock or heavy metal bands were comprised of mostly white guys, but the band Living Colour proved that a quartet of black guys could be just a forceful, funky and headbashingly punkish as any other hard rock assemblage. Simply put, these people of “colour” could rock like anybody else! In the book Secrets from the Masters (from the pages of Guitar Player magazine), published in 1992, Joe Gore wrote:

Apart from a few rare exceptions such as Jimi Hendrix and Prince, rock and roll has become white turf. To a large extent, the music business can't accept the idea of a black hard rock band, despite the music's undeniably Afro-American origins. Of course, there's no law prohibiting black musicians from playing rock and roll, but those who do are not likely to be embraced by the industry.

(This statement is an old one, but Gore’s assertion still seems relevant in the rock and roll business.)

Referring to the aforementioned book, Reid had this to say about blacks in the rock and roll business:

In all seriousness, look at the statistical averages of black rock and roll bands that are killing on the charts and really making it. You’ll see that there’s a definite amount of risk. It’s not something that’s happening in a mass, across-the-board sort of way – not since Hendrix. This is just as challenging as being in the Decoding Society, but it’s challenging on another level because you’re dealing with a whole social milieu, a whole way of thinking about rock and roll that’s been locked in place since the middle ‘70s.

In 1986, led by Reid, a coherent group of musicians morphed into the current Living Colour, which included vocalist Corey Glover, bassist Muzz Skillings and drummer Will Calhoun, a graduate of the Berklee College of Music. The band then developed a passionate hard rock feel, featuring funk, jazz fusion, hip-hop, electronica, grunge, R&B and reggae - all of which could be called funk metal. Other than style, the group highlights matters of personal importance, social issues such as racism, as well as elements of family and, of course – romance - though with a rather edgy interpretation of love’s many faces.

Living Colour produced their first album, Vivid, in 1988, which included their signature hit, “Cult of Personality,” a tune utilizing historical audio segments, e.g., “The only thing to fear is fear itself,” a popular New Wave technique at the time. Later, in early 1989, the band played on Saturday Night Live and then opened for the Rolling Stones on their Steel Wheel/Urban Jungle Tour.

In fact, Mick Jagger championed Living Colour from the beginning, helping them record their first demo, and priming the pump for obtaining a recording contract with Epic Records. Moreover, Jagger produced the songs “Glamour Boys” and “Which Way to America” on Vivid.

Their second album, Time’s Up, continued their unique sound of quirky rhythm changes, ballad-like intros by Glover, strung out leads by Reid, the pounding rhythm section of Skillings and Calhoun, and the use of taped segments of political importance, such as on the tune “History Lessons.” The album won a Grammy for Best Hard Rock Album in 1990. Perhaps the best of this bunch is “Love Rears Its Ugly Head,” along with “Cult of Personality,” both classics of the group, as well hard rock itself.

In 1992, bassist Skillings was replaced by studio veteran Doug Wimbish. Then in February 1993 the band released their third album, Stain, which didn’t score as well as the first two units, though the impetus and verve of the group was undiminished, especially on the tune “Ignorance Is Bliss,” which expressed the very quintessence of hard rock with Reid’s catchy, idiomatic riff run.

Unfortunately, Living Colour broke up in early 1995, splintering into solo acts, even though the fan base of their sound was as strong as ever. Soon, Vernon Reid released the solo effort Mistaken identity in 1996, and worked as a studio musician as well. And Wimbish launched his own solo effort, Trippy Notes for Bass, in 1999.

Then, late in 2002, Living Colour reunited, eventually producing the album Collide0scope in 2003, their first album that didn’t make the charts in the U.S. This offering is decidedly dark, gothic and contemplative and, appropriately, includes a cover of the Beatles’ “Tomorrow Never Knows.”

Later, in 2006, Sony released Live from CBGB’s (an NYC venue) and Everything Is Possible: The Very Best of Living Colour. For awhile, Corey Glover left the band to play the part of Judas in Jesus Christ Superstar. (Glover had also acted in Oliver Stone’s movie, Platoon, back in the 1980s and Loose Women in 1996) And, in May 2007, the band released their first live DVD, On Stage at World Café Live. Their most recent CD is 2009’s Chair in the Doorway.

As long as Living Colour continues to evolve with their distinctive funk-metal sound, they’ll treat us to some of the best hard rock ever produced. And if they can recapture the magic of their first two albums, they could astonish us well into the future. White, black or whatever, these guys can blaze with the best of them! 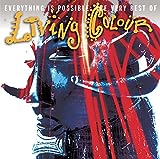