Marilyn Monroe - a movie star, fashion icon, worshiped by crowds... Or a regular woman? Was her full of fame life a fairy tale? Was the fame enough? Did the stardom bring her happiness?

First of all, what is happiness anyway? Of course it means something else to all of us. For some it is a career, a dream home, an expensive car, for others it is a fulfilling marriage. For some women happiness means having a child, for some men it means being independent – but could you feel fully content, if you were given only one of these things?

Lives of world known celebrities have always been a subject of envy of masses. We imagine that they must have just about everything. They are surrounded by beautiful things, wear expensive clothes. Everyone wants to take a picture of them. Everyone wants to BE them.

Is it worth it?

Who Was Marilyn Monroe?

“I always felt insecure and in the way, but most of all I felt scared. I guess I wanted love more than anything else in the world.” Marilyn Monroe

Marilyn Monroe is known not only as an actress, but also as the world's most famous blonde, sex symbol, an icon of pop culture and the person whose death is one of the most mysterious in history.

Marilyn fascinated and still fascinates artists, photographers, writers and filmmakers. Her character is still shrouded in an aura of mystery and ambiguity.

Well, she was mysterious, wasn't she? Definitely not a cookie cutter, stereotypical blonde, with no care in the world. Marilyn Monroe was a misunderstood, complicated individual, convinced about the duality of her own nature. She used to say about herself that she had "Jekyll and Hyde" living inside of her, "two in one". On the one hand: the screen star, seducing every man who stood in her way, the personification of sex, the most desirable woman of all time.

Radiant and joyful - that was the image generated by media, the one we know from the screen. On the other hand: she was alone, lost in the dark kind of a girl, who was still struggling with nightmares.

"It's not funny when you know yourself very well, or you think you know - everyone needs a little bit of vanity to survive and recover from failures" - wrote the 17-year old Norma Jeane Baker.

Another face of Marilyn emerges from her notes and poems - yes, Marilyn Monroe wrote poems: reflective, questioning and seeking, which of course did not fit into her media-created image.

She left behind two cardboard boxes of notes. From these writings emerges a "seeker" Marilyn Monroe, searching for a meaning of her existence, deepening her knowledge - a woman who has very little in common with the image of a not too smart blonde.

The notes show Marilyn who is insecure, struggling with fears not to share the fate of her mother and grandmother, confined in hospitals for mentally ill. Her life, marked by the abandonment by the mother, was a constant struggle for acceptance and consideration of others, for approval of her own value and talent.

She was very afraid of rejection: “A wise girl kisses but doesn't love, listens but doesn't believe, and leaves before she is left.” She never let anybody to become too close to her, she never stayed with anybody long enough to get attached: “It’s better to be unhappy alone, than unhappy with someone.” - even though she was craving a true soul-mate, somebody who would understand: “A career is wonderful thing, but you can’t snuggle up to it on a cold night.”

I am sure that Marilyn was proud of her career, and what she has achieved - but the price was sky high. She was locked up in a box of pretending. The true Marilyn: a pensive, saddened and buried in books woman would stop the sex bomb image. Nobody would believe it, and nobody wanted to see it. Fans, as much as they loved or hated her, did not let her be who she really was, they did not want to see her being herself.

Public wanted her to play a role, for the rest of her life - and never stop. Public wanted her to be an unrealistic character, a person who is always ready to play, laugh, act - a beautiful doll. with a permanent style on her face... And all she really wanted was to be her real self, to have somebody who would truly love her, and a family of her own, and a child. Inside of a grown woman was hiding a little girl, who never felt loved and accepted, even though the world around her called her "a superstar". The world was in love with a picture of her, a still image, not a breathing, hurting, loving women, who just wanted to "be".

Imagine the surprise when the world heard that a woman, who had everything, possibly took her own life! Even close friends didn't really know her... Marlon Brando said: "Do you remember when Marilyn Monroe died? Everybody stopped work, and you could see all that day the same expressions on their faces, the same thought: "How can a girl with success, fame, youth, money, beauty . . . how could she kill herself?" Nobody could understand it, because those are the things that everybody wants, and they can't believe that life wasn't important to Marilyn Monroe, or that her life was elsewhere". 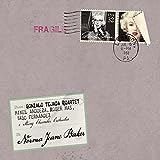 All of her life Marilyn Monroe tried to overcome a difficult childhood to become one of the world's biggest and most enduring sex symbols. She died alone, of a drug overdose...

Her life was short, full of success, and full of pain. She raised and shun for us for a little while... Even though she is gone, she still brightens up people's lives - for years now, and she will keep lightening up the darkness for many years to come.

I have a lot of warm feelings for her, I always had. I admire her, and not because she was beautiful or famous, but because she went through so much in life, always with her head kept high, and she was just a regular woman, trying to make it in the big world, trying to do something meaningful. At the same time she never stopped searching for love. That's what she really and truly wanted, that's what was missing, and that's what nothing could have replaced in her lonely heart: not the fame, not the money. People think she had "everything"... Really? Did she?

The truth about Marilyn Monroe, her life and death, probably we will never be known. We can only wonder...

Hats off to you, dear Marilyn, a beautiful person, inside and out!

Check Out My Hub About Another Timeless Star: Audrey Hepburn:

Check Out My Article About a Different Kind of "Celebrities":

To Join HubPages for Free