Is the 13th Time the Charm?

Megadeth's main man, guitarist/vocalist Dave Mustaine, was definitely on a roll as the first decade of the 2000's came to a close. 2009's Endgame album was an absolutely crushing example of the classic old-school speed metal that Megadeth had always excelled at, with Mustaine snarling out some of the angriest, most politically pointed lyrics of his career over a wall of guitar shred. Around that same time, he penned a best selling autobiography and mended fences with numerous old friends. He welcomed his long time partner and original Megadeth bassist David Ellefson (aka "Junior") back into the band in 2010, which ended a vicious split between the two that had occurred in the early '00s. Most surprisingly, Dave buried the hatchet with his former Metallica band mates as Megadeth joined the "Big Four" retro-thrash metal package tour (along with Anthrax and Slayer). With Ellefson back in place and Megadeth's profile higher than it had been in quite a while, fans were anxious to see where the band would go on their 13th studio album, cleverly titled Thirteen (stylized as "Th1rt3en"), which was released on November 1, 2011.

While I still think I preferred the swift-n-savage Endgame by just a smidge over this disc, Thirteen was a solid platter with more peaks and valleys than its predecessor. Endgame felt like a throwback to Deth's unhinged So Far...So Good...So What? speed-for-speed's sake period, while Thirteen seemed intent on recapturing the mid-paced groove of Deth's early '90s Countdown to Extinction era. The album starts off on a fine note with the chugging opener "Sudden Death" and the ode to Al Capone, "Public Enemy #1." When Mustaine snarls "I'm invincible...you might say despicable " in the latter, you have to wonder if he's referring to the gangster that inspired the track, or about himself. "Whose Life (Is it Anyways?) is another quality track (which would make a decent single) featuring a twisting battle of guitar riffs between Mustaine and Chris Broderick.

After those three tracks, Thirteen becomes something of a mixed bag. "We the People" picks up the anti-government/secret conspiracy lyrical ideas that permeated nearly every song on Endgame, while "Guns, Drugs & Money" starts out promising but is let down by an irritating chorus. Things pick up again with the crunchy "Never Dead" and "New World Order," both of which thrash along at a pleasing pace, then there's another dip with the sub-par "Fast Lane," which by my count is the third cheesy "drivin' a fast car" Megadeth song (joining 1988's "502" and 2001's "Moto Psycho"). Fortunately the haunting melodies of "Black Swan" and the slamming "Wrecker" kick things up a few notches and lead into the album's satisfying closing hat trick of "Millennium of the Blind," "Deadly Nightshade," and the album-ending title track.

Much critical ink was spilled about the fact that three tracks from this album - "Black Swan," "Millennium of the Blind," and "New World Order" - are technically not "new" songs at all, but newly recorded versions of older tracks that were demoed for past records. "Black Swan" was originally a digital bonus track from 2007's United Abominations, while "Millennium..." and "New World Order" were written during the 1990s and appeared as bonus tracks on the 2004 remaster of Youthanasia. While my inner cynic wonders if these songs were re-tooled simply to pad out Thirteen to full album length, I'm personally fine with their inclusion here because until now all three were unheard by me. Thirteen also happened to be the last album on Megadeth's contract with RoadRunner Records, with whom Mustaine had been at odds with for several years... so if he wanted to dust off some little-heard oldies in order to complete his last album a little quicker and get the hell out of Dodge, who can blame him?

To sum things up, Thirteen was not as face-rippingly awesome as Endgame was (and still is) but barring a few duff tracks it's still a suitably Dethly platter to my ears. Those of you who were hoping for a balls-out speed fiesta like Killing Is My Business or So Far, So Good, So What may feel disappointed, but fans of their '90s work in particular should enjoy Thirteen immensely.

On a somewhat humorous note, Thirteen's November 1st, 2011 release date just happened to coincide with the release of Lulu, the controversial double-album collaboration between Mustaine's former Metallica bandmates and the late, legendary art-rocker Lou Reed. Both albums were released on the same day in the U.S. and the clear winner on the charts was Megadeth. Thirteen clocked first-week sales of 42,000 copies and debuted at #11 on Billboard, whilst the Metallica/Reed album shifted a mere 12,000 copies for a position of #36.

Even though the Metallica and Megadeth camps have apparently settled their differences over the past couple of years, I can't help but wonder if Mustaine did a happy dance when those numbers came in ("WOO HOO! I FINALLY OUTSOLD THOSE @#$%'s!")... I hope he sent Lou Reed a thank-you card. 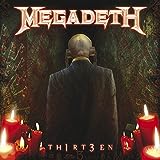 TH1RT3EN
Mustaine & Megadeth welcome Dave Junior Ellefson back into the fold for another classy platter of speed metal.
Buy Now