Mike + the Mechanics: Out of the Blue - Album Review

I love pottering in the greenhouse and garden and listening to classic rock with my Labradoodle, Florrie.

Florrie Labradoodle and I love to listen to classic rock when we are doing jobs together around the house. So we were both excited to hear of a new album by one of our favourite bands, Mike + the Mechanics. Although you would not think it to look at Florrie’s grumpy face! Formed by Genesis guitarist Mike Rutherford in 1985, the Mechanics have sold over ten million albums worldwide. ‘Out of the Blue’ is their ninth studio recording. Rutherford is joined by vocalists Andrew Roachford and Tim Howar for three brand new songs and eight re-recorded classics. The deluxe version also features six new acoustic versions of their hits.

Out of the Blue

For me, an album with the title ‘Out of the Blue’ evokes memories of the Electric Light Orchestra classic from 1977. Ten million copies were sold worldwide and hits such as ‘Mr Blue Sky’, ‘Wild West Hero’ and ‘Sweet Talkin Woman’ featured on this memorable double album.

Genesis released their own classic double live album ‘Seconds Out’ that same year. This release marked the departure of guitarist Steve Hackett from the band and gave Mike Rutherford a more prominent position going forward.

By the mid 1980’s, Genesis albums and tours were getting fewer and farther between as Phil Collins’ solo career took precedence. So Rutherford created his own side project - Mike + the Mechanics. The original line up featured Paul Young of Sad Café and Paul Carrack as vocalists. A series of hits followed including ‘Silent Running’, ‘Over My Shoulder’, ‘All I Need Is A Miracle’ and ‘The Living Years’.

Sadly, Paul Young died unexpectedly in 2000 and Paul Carrack left to pursue his own solo career. Genesis themselves reformed with Rutherford and performed a series of sell-out concerts during 2007. So that looked like the end for Mike + the Mechanics.

But in 2010 Rutherford teamed up with singer songwriter Andrew Roachford and Canadian singer Tim Howar. Roachford previously had hits back in the 80’s with his own band and Howar played the leading role in ‘The Phantom of the Opera’ for a time.

‘Out of the Blue’ is the third album with the same line up. The new record has most likely been put together to promote the current Mike + the Mechanics tour. It is described on the Mechanics website as ‘3 brand new tracks plus all the hits’. The new songs are ‘One Way’, ‘What Would You Do’ and the title track ‘Out of the Blue’. All three are quite upbeat with the vocals delivered in the typical restrained Mechanics power ballad style. You are left wanting more!

Fans have wondered why the new songs were not released as a separate EP. Rutherford has done this on two occasions before with Genesis (‘Spot the Pigeon’, 1977 & ‘Paperlate’, 1982).

The Mechanics have already released their hits on two compilation albums - ‘The Hits’ in 1996 and ‘The Singles’ in 2014. The difference in the Out of the Blue’ versions is that they are re-recorded with Roachford and Howar on vocals. This may have something to do with the Mechanics now being signed to a different record label to when these tracks were first released. Rutherford states that the songs have evolved over the years in a live setting. So this leaves you wondering why not release a ‘live’ album, especially as a couple of old Genesis songs are covered in their live set? I would love to hear those!

To a dedicated fan, there are probably many interesting nuances in the new versions. To a casual fan like myself, they sound pretty much like the originals.

The deluxe version has an extra CD with half a dozen new acoustic recordings of classic Mechanics songs. Again these feature Roachford and Howar accompanied by a simple piano and acoustic guitar backing. Interesting at first, I soon realised I much preferred listening to the ‘full power’ of the originals.

The album cover features hot air balloons against a bright blue sky. Each balloon is itself a previous album cover. The concept is not dissimilar to the last album artwork for ‘Let me Fly’ which was also based on a bright blue sky background. The vinyl album has a gatefold sleeve with a montage of band photos inside. The deluxe version CD has a hardback case with a booklet of band photos.

So overall, I think this is a good release. Some new songs, a tour and an effort by the band to give fans something new from old songs. It reached No. 7 in the UK album charts in its first week of release.Florrie and I were particularly pleased to get our paws on a signed copy.

‘Out of the Blue’ on Amazon UK 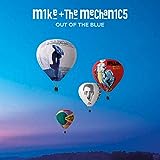 Out of the Blue
Buy Now