Milan is a Filipino romantic drama film released in 2004 by Star Cinema ABS-CBN Film Productions, Inc. It is written by Raymond Lee and directed by Olivia Lamasan. The movie stars Claudine Barretto and Piolo Pascual, two of the most popular actors in Philippine cinema. Claudine Barretto has gone into semi-retirement while Piolo Pascual’s showbiz career is still going strong.

The movie is more than just a love story. It also shows the lives of Filipinos in Milan, Italy. The movie follows LINO (Piolo Pascual) in his journey to Italy in search of his wife, MARY GRACE (Iza Calzado) whom he has not heard of after she went off to Milan to work as a domestic helper.

The earlier part of the movie has established that Lino, a 25-year-old engineer, was a bit immature. He gets chewed up by his family for not being able to stay in a job, he either gets fired or he resigns.

Outwardly, he couldn’t care less about what his family thinks but deep inside, he struggles with his life, especially with the fact that he has lost touch with his wife. He pines for her and is miserable without her.

Lino decides to go to Milan by paying agents who smuggle him and other Filipinos to Italy by crossing the Swiss border. He has entered Milan illegally even when he has paid so much money to an agency for the trip.

The movie makes it clear that in Milan, you have to speak Italian or you can never talk to anyone on the phone. Lino finds himself out of options since he has never taken time to learn a few Italian words before entering the country, until he hears someone speaking Tagalog on her phone, which turns out to be JENNY (Claudine Barretto).

For Lino, it is a stroke of luck that he has met Jenny, a hardworking and smart Filipina trying to survive in Milan. But for Jenny, he is just another source of income. She takes him in as a boarder to share her bedroom in an apartment that she shares with other Filipinos, most of whom come to Milan illegally.

Jenny, known in her circles as the woman who does not rest, works herself to death in order to send money to her family back home. On top of her three jobs, she makes extra euros by renting out the extra space in her bedroom, and selling phone cards.

On Lino’s first day in Milan, he learns that to survive in Italy, one must be smart. Housing is very expensive so a group of Filipinos has taken a large apartment to share the rent. They also take the illegal migrants and charge them for their stay while they are looking for jobs.

Jenny has not only given Lino a place to stay but also mentored him on how to survive in Milan. She helps him distribute flyers of his wife’s picture. She asks her friends to help locate Mary Grace.

When Lino’s funds start to dwindle, Jenny helps him get jobs. Most Filipinos in Italy are domestic cleaners. Lino finds the cleaning jobs demeaning and he struggles with his pride, but he needs the money to continue his search so he has no choice but to take jobs. He gets to know Jenny better and learns why she works the way she does, he discovers her struggles and her pain, and her selfless devotion to her family.

While Jenny helps Lino search for his wife and speak Italian, Lino also shows her that work is not everything, that there is time to enjoy life and rest from work.

As Lino and Jenny spend time together, they begin to fall for each other. Then Jenny gets a call from a friend telling her that he has found Lino’s wife in Brescia, Italia. Jenny decides to see the wife alone. She pretends to look for a Filipina friend at the vicinity. She learns that the woman has a six-month old son, and an Italian husband. She does not know how to tell Lino.

Their relationship becomes deeper and they find happiness in each other. When Jenny tries to tell Lino about Mary Grace, he says he is no longer interested in finding her. He wishes Mary Grace happiness wherever she is because he is very happy with his life now. Jenny feels that perhaps there is no need to tell him that she has found Mary Grace. They are happy and that is all that matters. Nothing changed in their difficult life except that they found love and strength from each other.

But their relationship turns sour when Lino starts to become discontented with life in Milan. Just like in the Philippines, he can not stay in a job. Jenny helps him get a job where he can use his engineering skills. He alienates Jenny from her friends by moving to a new apartment. Her friends tell her that she is giving in too much to Lino’s demands. But that is Jenny, just like the way she gives all of herself to her family, she also gives everything to Lino. But Lino is still unhappy.

He becomes more difficult when Jenny’s brother, Perry, comes to Milan and lives with them. Lino becomes demanding and is jealous of the attention Jenny gives to Perry who is also another jerk. Jenny finds herself between a rock and a hard place.

Then Jenny finds an unfinished letter that Lino has started to write to Mary Grace. Lino is still the same immature person. When he feels that Jenny has not measured up to his expectations, he begins to pine and long for Mary Grace.

Just as Lino’s hysterics has turned destructive, Jenny feels that they have reached the end. She takes him to Mary Grace. Lino feels deceived that Jenny has not told her about Mary Grace. He leaves their apartment and Jenny continues to live like nothing happened. Her friends know that she is in so much pain, though she does not to show it.

Mary Grace explains to Lino why she has disappeared from his life. While crossing the Swiss border, their guide has taken an interest in her and has threatened to leave her and the other Filipinos in the border if she refuses his advances. Her choice is to reach Italy or face the dobermans. The man has left her and an Italian man has subsequently taken her as his wife. She did not want to drag Lino into her messy life, so she has opted to disappear from him.

Vangie and Jomar: A Sub-Plot

The movie includes the story of romantic partners Vangie and Jomar. Vangie becomes distraught when she finds herself pregnant because both Vangie and Jomar have legal spouses in the Philippines.

Vangie calls her husband in the Philippines while she holds Jomar’s hand. She tells the husband that she can not come home for Christmas and makes up excuses when the truth is that she is pregnant by another man. She promises to come home the next Christmas.

The husband is furious but in a few minutes, Vangie is promising to send anything they want. She says, “Just give me a list and I’ll send them right away.” She says, “I love you” to her husband, hangs up, and tearfully hugs Jomar.

Since Vangie can no longer work when the baby comes, Jomar has to find more jobs in order to support not only his family in the Philippines but also Vangie’s family so as not to arouse suspicion if she fails to send money, and on top of that are the expenses needed by the forthcoming baby.

Jenny’s brother decides to go back home to the Philippines. The government of Italy has granted amnesty to the illegal aliens and Jenny and her friends apply for amnesty to become legal residents.

When Jenny and Lino meet unexpectedly, Jenny decides that they are better off the way there are. Up to that point, Lino has not exhibited a change in his behavior but since the movie is long enough, his change comes in an interview where he acknowledges that he has changed his perspective about life in Milan, where he talks of his friendship with Mary Grace, and where he resolves to find Jenny again.

The movie ends in the plaza square where Lino walks to Jenny amidst the pigeons. He professes his love for Jenny and she accepts.

I may have failed to see it sooner or the movie is not clear enough that most characters in this movie are illegal residents in Milan prior to the amnesty granted by the Italian government.

This movie somewhat sends a message that many Filipinos going to Milan are smuggled through the border with fake passports. In one scene, someone is telling Lino about the “baklas” or those migrants with fake passports. He even asks Lino if the name in his passport is his real name and Lino shakes his head.

The story of Vangie and Jomar is not limited to Milan. Most Filipinos overseas are engaged in extra marital affairs. They reason that loneliness drive them to find comfort in one another’s arms. In one scene, a man says, “We know it is a sin, but what can we do? It is so lonely out here. We need to have company, have someone to talk to, and then feelings start to develop. We fall in love.”

Lino has started out as immature, irresponsible, and difficult to deal with, and he ends up the same. There is no growth as far as this character is concerned. Jenny would have been better off without him in the end. It should have ended with Jenny walking away from Lino.

To sum it up, this is a movie depicting the sad plight of many Filipino overseas workers. In one of Lino’s tirade, he says, “Inodoro lang ang katapat ng diploma dito.” (The toilet bowl is the equivalent of a Philippine diploma in Italy.) True enough, because in Italy or in many parts of the world, most Filipino professionals become domestic helpers. 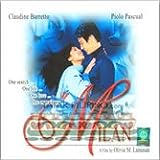