Note: Spoilers ahead! Proceed with caution!

Based on a novelette by Stephen King, Silver Bulletdetails the exploits of the Coslaw family (more on that name in a second) when a werewolf begins killing off the residents of Tarker's Mills, Maine. The film is narrated by the family's eldest daughter Jane (Megan Follows, who played Anne Shirley in the 1985 miniseries Anne of Green Gables). She sounds like a middle aged woman as she narrates, even though the movie came out in 1985 and the story is set in 1976, she should technically be only 24 years old, but never mind.

What's Good About the Film?:

There's a reason why Gary Busey's name is shown first during the opening credits: Not only does he have the best lines in the film, but he also turns in the film's most entertaining performance. Fellow film critic Jeffrey M. Anderson notes that his scenery-chewing performance “devours more than the werewolf does,” and he's right. His character Uncle Red, a “chronic drunk” as one character describes him, is made to say things like, “Holy jumped-up ball headed Jesus palomino” and “I feel like a virgin on prom night.” With dialogue like that, it would be something of a miscalculation for the actor to try to play the role straight. He's an over-the-top character, and it takes an over-the-top performance to bring him to life.

He's such a lovable deadbeat that the movie is worth seeing just for his performance alone. The rest of the cast doesn't fare as well, but they do their jobs well enough. When the family at the heart of the story are named the Coslaws (I was sort of disappointed that there wasn't a family named the Casseroles somewhere in town), you shouldn't expect a totally realistic depiction of an average American family. They are, in fact, the sort of family that only exists in the movies. None of their lines are exactly believable, and whenever conflict does arise in their household, it's usually resolved in the corniest manner imaginable. Take the opening scenes as an example. When Jane is sent to look for her crippled brother Marty (the late Corey Haim) at a town fair, Marty's friend Brady (Joe Wright, another actor who unfortunately died young) throws a garter snake at her. She falls into a puddle of mud and rips her panty hose. She curses Marty, scolds her parents when they take his side (as they always do), yells at him, etc. How is the conflict resolved? Marty wheels himself into her room in the dead of night and gives her money so she can buy a new set of panty hose.

The dialogue in this scene is sappy and not very believable (it is, as I said, corny), but you want to know something? After that scene, I was sold on this family. I accepted the fact that they weren't supposed to be realistic. If the performances are good enough to make me care, then I'll buy into it. You can tell me that the mother of the family is some Russian spy and the father is a ballerina instructor, as long as you got performances that make me care, I buy into whatever you tell me. And since Silver Bullet is such a gloriously cheese ball monster film, and because a true to life family would've felt all wrong within the context of the movie, it seems only fair to give the performances that much leeway.

The werewolf effects are also quite impressive. You've seen better effects in other movies, but there is no denying that some of the special-effects involving the creature are sort of competent (like the scene in the end where the creature changes back into a human; well done, I say). And I also love movies that take place in those American small towns where everyone knows everybody, everybody goes to church, there's only one sheriff and one deputy, one school in the entire area, and so on. It seems like a pitch perfect town. In other words, it's the perfect place to set a horror film involving a homicidal werewolf.

What's Bad About the Movie?:

Well, for starters, it's not scary, so those of you looking for a terrifying werewolf picture would be advised to steer clear of this one.

And like April Fool's Day and Shocker, Silver Bullet also features instances of characters behaving like total idiots. There comes a point in the film where Marty and Jane discover the identity of the creature and wonder what to do about it. They can't tell the adults because they wouldn't believe them. “So what do we do?” Jane asks. Marty's idea is the worst possible idea imaginable, especially since the villain knows good and well that Marty and Jane know of his secret. Marty decides to send the creature a bunch of anonymous notes telling him/her that he should just kill himself. Yeah, that's not going to make him mad.

Also, could the filmmakers have even tried to keep the identity of the creature a secret? When it is finally revealed who it is, it is done so as a shocking twist, yet it's pretty obvious who it is the second the character walks on screen. Right from the very beginning, the town priest looks as though he were ready to jump at and rip apart anyone who so much as greeted him with a simple “Hello.” He is also the only person who behaves in such a manner. It's almost hilarious when the filmmakers try to reveal his identity as a shocking twist, for it assumes that the filmmakers felt as though they had the upper hand all along. Trust me, they didn't.

So Silver Bullet is not a scary movie. So what? It is entertaining. I liked the family at the heart of the story. I liked the visuals, and I had a blast listening to the dialogue. Sometimes horror movies can be fun even when they fail to scare you, and one's enjoyment of such a horror film is, of course, a matter of personal taste. Silver Bullet is, in my eyes, that type of horror film, and I enjoyed every second of it. 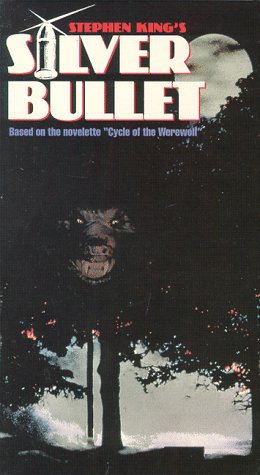