Before watching "Shark Night 3D", I actually thought it was a sequel to "Pirahna 3D" because both are horror movies about killer fish and both are in 3D. But hey, maybe I just need to take my movie happy pills. Then again, people who think that are probably the same stupid people who think "Land of the Dead" is the sequel to the remake of "Dawn of the Dead", you know, like people who are too lazy to do their own film research.

Anyway, "Shark Night 3D" makes "Deep Blue Sea" look like "Citizen Kane". Speaking of "Deep Blue Sea", I was upset to learn that "Shark Night 3D" used stock footage from that film in the opening titles; more specifically, the scene where the shark pops out of the water and eats LL Cool J's pet bird. Mind you, this sequence is accompanied by an immature rock n' roll soundtrack with ADHD editing.

Soon after that comes the first attack in which there is zero build-up or anticipation, then we jump to a couple of college roommates, one of whom is playing Xbox 360 while the other one is busy studying. Oh God, now I know what I'll have to endure for the next hour and a half.

In short, "Shark Night 3D" is about a bunch of idiotic college kids who cross paths with some villainous rednecks who trap them on a lake filled with a wide assortment of killer sharks that they've collected over the years. This sounds a bit like an aquatic version of "The Texas Chainsaw Massacre".

Is "Shark Night 3D" an interesting film? Does it do anything differently? If you really feel the need to ask those kinds of questions after simply watching the trailer alone, I feel sorry for you. However, the answer is no. "Shark Night 3D" is nothing but filler/fluff to help fill in the blank slots on Hollywood's uninteresting 2011 schedule. 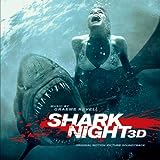 The biggest issue that bulges out of this crap-fest of a movie is the cast of characters. They're all stereotypes whom we've all seen before. Let me see if I can list all of them here:

Oh, I have a headache, I can't continue with these stereotypes!

Random Things That Make No Sense