Some well-known critics will say Leap Year is a mediocre film of 2010. It didn't earned rave reviews from them or maybe they're just being paid to put it down (either of the two usually happen).

Since I am not part of any big company dealing with movie promotions, I still have the guts to let my little voice be heard through HubPages by sharing my perspective regarding a good film from bad ones.

This year 2012, as the Leap Year movie may be forgotten into oblivion by many, I was able to rent a VCD version of it at the local video store.

Since I was busy working on board ship way back 2010, I am having some kind of movie marathon each weekend and included the movie on my list.

So, if you want to see this movie with new interest, allow me to share with you my interpretation of this beautifully-crafted movie. Never mind the glitches or culture shock that you'll discover regarding Dublin, Ireland.

If you never traveled the place, the neighbor-country of United Kingdom, then this film is suited for your query in order to lessen your curiosity.

Ireland - where most of the scenes happened 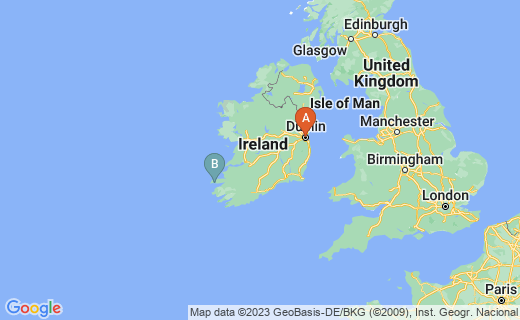 Trivia on Leap Year - from history to movie

My review on Leap Year

The scene is in the busy New York City.

Amy Adams acted as Anna Brady in the story with her boyfriend Dr.Jeremy Sloane (Adam Scott), a cardiologist. Her job as an apartment stager in Boston, New York is to make an old, unkempt house into an affordable home with modern setting inside, as in new paint, modern appliances and decoration.

Jeremy is heading to Dublin, Ireland and told Anna to follow him later.

Next scene, Anna talked with her father, Jack Brady (John Lithgow) at the local bar, regarding her engagement with her doctor-boyfriend.

And he told Anna that there's an Irish tradition that a woman can propose to her boyfriend to marry her and in return, the man must accept it. And that falls on Leap Day, February 29.

Expect the unexpected. As Anna rides on a plane bound to Dublin, a turbulence happened on air as erratic weather prompted the pilot to have an emergency landing in South Wales. The priest next to her seat was just relieved to hear the decision of the captain in order to avoid Anna's non-stop chatter.

Then, next scene, Anna will be looking for the nearest inn, where old men in the middle of the conversation will be surprised to see her inquiring for the owner and for a phone.

Declan O'Callaghan (Matthew Goode) is an unconventional innkeeper. As owner of that rumbling inn, Anna hired him as her taxi driver (of that old car) in order to drive her to Dublin in order to pursue her proposal on time with Jeremy.

A lot of mishaps happened in the story. The belief of seeing a passing black cat that will cause troubles or accidents is also practiced here in the Philippines.

Then, road mishaps happened, like the herd of cow blocking the road, the car running backward then plunging into the ditch or brook, then the snatching of her traveling bag by some rude teenagers (posing to help by giving her a ride), then being late at the train station.

Declan, bored with her antics, he toured her at the ruined castle nearby the train station, then it rained again, prompting them to look for an inn. The train station master, Mr. O'Docherty happened to live at the nearby.

The couple , offering them a cozy and warm bed, prompted them to help them cook chicken tripe or stew. Declan and Anna followed the recipe.

Come dinnertime, the two were able to meet the Italian couple who were touring in Ireland. As a custom, each couple must renew their trust with each other after the dinner and toast for their renewed passion.

The catchy question about life in the story is: "When there's a fire, what will you choose to bring?"

As Declan asked this to Anna, she became defensive and retorted the question back to Declan.

Later, in the story, after Jeremy's showy proposal, Anna will realize her outlook about love, the one that her heart longs for a long time.

When Jeremy prioritized his gadgets instead of saving her, during the fire alert, Anna was disappointed with her beau's initial reaction regarding the incident.

True love truly comes from the most unexpected places.

I like the song of The Mamas and The Pappas, "Dream a Little Dream of Me".

I am very sure that you'll fall in love with the characters. As if, you also want to experience the adventures, err, misadventures of the two protagonists.

Note: I've seen Amy Adams in the Disney movie, Enchanted, in 2007. I loved the way she portrayed the animated film. Then, came the movie Doubt. I've watched the news and promotion of her portrayal of Julie & Julia.

Then a two-year long vacation came and I had time watching movies that I've missed, including her latest offering, Leap Year.

Comments by critics, movie buffs and actors of Leap Year

A certain, Mr. Darren wrote this as part of his comment on a movie review regarding Leap Year.

Films like this will always find an audience. I understand the (somewhat sexist) argument that these are like mindless action films are for dudes, but they’re not really. But then the (somewhat sexist) response to that is to say that I’m a dude and I wouldn't understand. In fairness, there are examples of all genres that suck, but the romantic comedy seems to have a disproportionate amount of room for offensive suckage (they can be sexist, racist, classist) for a seemingly inoffensive genre.

Matthew Goode, when asked about his participation in the movie, said the following upfront statement:

‘Some actors go, “Bing!” and suddenly they’re being paid huge sums. Me, I seem to get screwed every time. It’s a lot better than it was, but people have this odd idea that I must be a millionaire who swans around accepting roles whenever I care to. I’m very much a jobbing actor who’s still trying to find a place to rent down the road.’

Anyway, a movie critic, Castor, also clarifies his method of reviewing a movie.

I assume it’s because there is a lot more flaws in movie that are not very good. In my opinion, the point of reviewing a movie is to state how it could be made better. Reviews that basically only say things like “It was horrible” or “I hated it” are the worst kind of reviews and don’t bring anything worthy to discuss.

Mr. DEZMOND opined why many of moviegoers will like Amy Adams for this movie.

I’m not sure why are some people (usually those who watch only action movies) so eager to attack the genre of romantic comedies. I mean, if you don’t like it so much, just don’t watch it. What’s the point of trashing something you don’t really watch (or maybe you watch it secretly?).
Amy Adams’ career got just good things from this role, because millions of people around the world go generally go to movies to watch comedies and light films would go to see this movie in cinemas and they will become her new fans. With this kind of films she is actually shooting to A-league, because she’s showing a potential to carry a film on her own. These movies makes her name a familiar one among the ordinary moviegoer.

What to remember in the movie Leap Year

The bride challenged the groom to never steal, lie or cheat. "But if you must steal," she says, "then steal away my sorrows. And if you must lie, lie with me all the nights of my life. And if you must cheat, then please cheat death...because I couldn't live without you."

I usually stop watching movies when the credit lines are being scrolled on the screen of my video player.

But in this movie Leap Year, I was enthralled by the closing music,"Dream a Little Dream of Me" by The Mamas & The Papas.

I believe that even a mediocre movie will have an edge on the musical scoring that will carry it at the top.

Thanks to Mr. Randy Edelman.

Here’s the complete list of all 15 songs from the movie Leap Year for you to enjoy.