In the summer of 1976 a new album was released. The title of the album was 3:47 EST and the artist was Klaatu, however, due to a mix up at the record company the album was simply released as Klaatu. The only information that was available was the name of the group was Klaatu, all of the songs were composed by Klaatu and produced by Klaatu. The album was recorded in Canada and there were no photos of people on the album. Since this group sounded a lot like The Beatles (like many groups have) and since there was no evidence as to who this group was, rumors began to fly.

The rumor was that The Beatles had reunited under another name to record an album. They did this for 2 reasons. First they wanted to see if they could sell their music without their name. Second they wanted to make up for the one "flop" they had in their career which was Magical Mystery Tour.

Radio stations began playing some of their music and it caught my attention. I liked the songs that I heard and eventually got the album. I came to the conclusion early that this was not The Beatles, however, I thought there was a small possibility that John Lennon could be in the group since he was out of the spotlight at that time. In 1977 I came across a second Klaatu album. This confirmed to me 2 things. First that John Lennon was not in the group and second I really liked their music. The first album was not a fluke.

Klaatu proceeded to record 5 albums in 6 years with their first album being their biggest seller and their only gold record. Their second album, Hope, won a Juno Award (the Canadian equivalent to a Grammy) for their engineering. The Carpenters released one of Klaatu's songs as a single in the late 1970's with Calling Occupants of Interplanetary Craft. That song made it into the top 20 in the U. S. charts.

Klaatu finally "revealed" who they were with their 4th album. They were a trio from Canada, John Woloschuk, Dee Long and Terry Draper. They also did a short tour in Canada in 1981.

Why no one figured out who Klaatu was and how the Beatles rumor went on for so long is a mystery to me. Klaatu actually formed in 1973 and in 1974 had a top 40 song in Canada with California Jam. They even appeared on a Canadian TV show. If anyone would have taken some time to do a little research, the Beatles rumor would have ended quickly. Who knows if that would have been a good thing or bad thing. Klaatu is a terrific group but would they have gotten the publicity necessary for air play had the Beatles rumor been proven wrong quicker?

That's something that we will never know. What we do know is that Klaatu left us with 5 great albums. 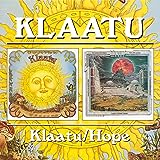 The five albums that Klaatu originally released were:

Here are some of Klaatu's songs.

1) Anus of Uranus, Sub-Rosa Subway, Calling Occupants of Interplanetary Craft, Sir Bodsworth Rugglesby III were all on the Klaatu album.

2) Hope, The Loneliest of Creatures, We're Off You Know, Around The Universe In Eighty Days were on the Hope album.

4) Knee Deep In Love, Howl At The Moon, Paranoia, Silly Boys were on the Endangered Species album.

5) A Million Miles Away, Maybe I'll Move To Mars, Blue Smoke, Mrs. Toad's Cookies were on the Magentalane album

Don't be misled by the unusual titles, Klaatu released some great music. In fact, they are the only group besides The Beatles that I can honestly say I like every song that they have ever released. I encourage you to give Klaatu's music a chance.