Synopsis: Canterlot High and a rival school face off in a series of sporting events.

- Animation was nice. Granted, it pales in comparison to the previous films in terms of quality, but it's serviceable.

- Ties into the season 5 finale of the show quite nicely.

- Forgettable characters, and poor character development for anyone not named Twilight or Sunset.

- A lot of plot holes that are either unexplained, or they contradict the narrative that the previous films established.

- Humor was often hit or miss half the time, with the end joke involving the Crystal Prep principal being a complete miss. 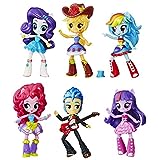 For those of you who are new to this franchise, I'll try my best to get you up to speed. Sunset Shimmer was a girl that came from the magical world of Equestria, where it's populated by sentient animals like unicorns, pegasuses, ponies, dragons and all sorts of mythological creatures. Anyways, Sunset eventually escaped into the human world because she felt neglected by her mentor, Princess Celestia, when she was denied the chance to ascend to becoming an alicorn princess herself (which is basically a hybrid of a unicorn and pegasuses). Upon her arrival, she immediately notices that her body was transformed into a human being to fit in with the rest of us. And, you pretty much know where it goes from here.

Anyways, in spite of being in the human world for quite sometime attending Canterlot High, Sunset finds out about her school's rivalry with Crystal Prep. As it turns out, every few years the two schools compete in a friendly event called the "Friendship Games", which is basically just a series of random events featuring some of the schools best students competing against each other. According to Apple Jack, Crystal Prep always wins these games, which has sparked a lot of bitterness towards them. As for Crystal Prep, it's portrayed as something of an elitist prep school, where even the damn principal feels that winning these games are more important than anything just to show how superior they are to Canterlot High.

And to Sunset's surprise, she's faced with a new yet familiar adversary by the name of Twilight Sparkle. Unlike the previous Twilight Sparkle that taught Sunset the magic of friendship, this new incarnation is extremely internal, and seems to be thrust into an adversarial position this time. Like the previous films, the story is set up with a lot references to the main show itself, so I wouldn't recommend this movie to any newcomers to the franchise. However, if you're already a brony, and you've been following these movies for a while, then you should be caught up to speed.

Unfortunately, this is probably the weakest film out of all the "Equestria Girls" movies. Granted, it does a nice job bringing Sunset's story arc full circle, and it seems to tie into the season five finale of the "My Little Pony: Friendship is Magic" TV series quite nicely. However, the film tends to rely on the notion that you already know who the hell most of these characters; hence you barely see any of these characters get any kind of development; outside of Sunset and Twilight.

Not to mention there seems to be something of a plot hole here. Unlike the previous villains of the past films that always had some kind of explanation on why they had powers in the human world, Twilight possesses an amulet that's magically able to drain the main six of their powers; whenever they do something to unleash it.

Granted, there might be an explanation in the season five finale this year, but it's never explained in this movie. If anything, her amulet can magically suck away magic because it just can. Hell, even Twilight herself admits she doesn't know why it's able to do that, so it's almost like the writers just didn't give a s*** about explaining it.

Speaking of plot holes, it was previously established in the second film that the main six could only use their "friendship powers", without the elements of harmony, only when playing music. In this new chapter of the "Equestria Girls" series, not only is that no longer the case, but their magic spontaneously pops up whenever they do anything that represents their element of harmony; hence singing is no longer required. For instance. Since Apple Jack is the element of honesty, all she has to do is do something honest, and then her magical "pony" powers appear. It's contradicting to say the least, and it doesn't make a whole lot of sense.

Not to mention the fact that everyone still takes teenagers using magical powers rather well in this world, which is supposed to be similar to our own. Indeed, there's no calling the cops or the media about it, as one would expect if this were to happen in real life. Nope. Apart from Crystal Prep's principal wanting to use Twilight's stolen magic to gain an edge over Canterlot High in the "Friendship Games", everyone else seems to act like discovering magic in the real world is not a big deal. And, it's because of this little fact that even the damn joke this movie tries to pull off around the end involving the Crystal Prep principal doesn't work.

As I briefly mentioned before, most of the main characters are poorly developed and probably didn't really need to be here. If anything, I feel like this story would've been better off if more screen time had been devoted to both Sunset and Twilight, as their characters were the heart and soul of this film.

Overall, I wouldn't say that "My Little Pony: Equestria Girls- Friendship Games" is the worst animated movie that I've ever seen. However, it's definitely the weakest of the entire series though by far. But if you're a brony that's been following this series from it's beginning, then it's worth checking out if only to see Sunset Shimmer's story arc come full circle.