Alisha is a fan of all things weird & wonderful, terrifying & terrible. Everything from Stephen King novels to Steven Universe to Cthulhu.

Welcome to Night Vale is a hugely popular podcast about a town named Night Vale. This fictional (perhaps) town is a small, desert community somewhere in the American southwest, where mysterious things happen.

Like many small towns, we hear about these odd occurrences by way of good old public radio. WTNV community radio host, Cecil Palmer, shares the news, traffic, and weather of Night Vale -- that is when he isn't gushing about his love interest or trying to escape whatever is currently causing havoc in Night Vale.

Welcome to Night Vale is reminiscent of old radio shows like War of the Worlds or Art Bell. Imagine Lovecraft, Twin Peaks, Gravity Falls, Area 51, or X-Files described by NPR.

Welcome to Night Vale episodes are released every two weeks.

You Drive Through the Seemingly Empty Desert

You See a Strange Exit to a Place Called Night Vale

You Drive Through a Strange Area

Out of the Desert Appears a Town

In Some Regards It Looks Like a Normal Town

But You Start To See Strangeness

The Town of Night Vale

"A friendly desert community where the sun is hot, the moon is beautiful, and mysterious lights pass overhead while we all pretend to sleep."

Night Vale is "A friendly desert community where the sun is hot, the moon is beautiful, and mysterious lights pass overhead while we all pretend to sleep."

It could be any number of little, southwestern desert communities that you may have even passed right by. Though you'd likely never realize, as it can be difficult to find.

All Hail the Glow Cloud

The Great Glowing Coils of the Universe

Night Vale, like most small towns, has a Mayor and a City Council. The Night Vale Public Library was recently remodeled and has a summer reading program. The NRA has bumper sticker drives. Civic pride is mandatory.

Between the School Board and the PTA, they keep Night Vale's schools running, which can be a bit difficult since pens are illegal and computers are not allowed.

The Boy Scouts are a big deal. Sign-ups are automatic and random. The Girl Scouts are a major force to be reckoned with.

Both the Illuminati and the Freemasons have branches in Night Vale.

Sightseers should check out the Night Vale Harbor and Waterfront Recreation Area. You may want to wait for a flashflood though, so there's some water out there.

Radon Canyon is a beautiful stroll, the view is literally breathtaking. Rebreathers are available if you wish to visit the canyon.

The Night Vale Clock Tower cost quite a bit of money and while it bounces around town and is impossible to see or touch, it is still worth a visit if you can find it.

The Abandoned Mine Shaft outside of town is off limits, as all voters who voted improperly are being held there until they change their votes to the proper candidates. There is HBO OnDemand out there now though, so it's much nicer if you do commit a crime and need to be re-educated.

There are also shows being held at the New, Old Night Vale Opera House.

Don't Go Into the Dog Park

Get the Night Vale Book

Get the 2nd Night Vale Novel

It Devours!: A Welcome to Night Vale Novel
It Devours! is a mystery tale about faith and science and their convergence in Night Vale. One of Carlos' scientists meets with the Joyous Congregation of the Smiling God, and there she finds more than expected. I think this one is even better than the first novel!
Buy Now

The nearby town of Desert Bluffs is home to true horrors. Gleeful radio hosts, fervent producers, company picnics, and the Smiling God.

Welcome to Night Vale is produced by Commonplace Books and written by Joseph Fink and Jeffrey Cranor.

Joseph Fink created Welcome to Night Vale and co-founded Commonplace Books. He is a writer and editor, look for his publications - 'What It Means to Be a Grown-Up' and 'The Untold Stories of H.P. Lovecraft'. Joseph also does most of the announcements before each episode of Night Vale, though sometimes other people do them and pretend to be him.

Jeffrey Cranor is a co-writer of Welcome to Night Vale. Before Dylan Marron took over the role he also did the voice of Carlos The Scientist. He is heavily involved in live theater and often writes and directs for the stage.

Get The Untold Stories of H.P. Lovecraft 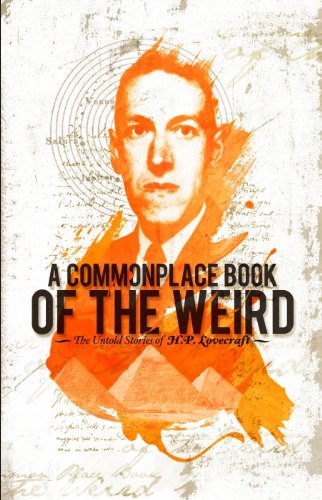 A Commonplace Book of the Weird: The Untold Stories of H.P. Lovecraft
H.P. Lovecraft is iconic and his stories are what started many a person down the road of horror. Cthulhu and the Great Old Ones aren't his only creations, check out these other stories from him in this book collected by Joseph Fink. They may be lesser known, but maybe that's just because some people can't handle their black, terrifying and malevolent horrific tales of terror.
Buy Now

The Voices of Night Vale

The main voice of Night Vale is done by Cecil Baldwin. He plays the character of Cecil Gershwin Palmer, host of WTNV community radio and he narrates nearly every episode. His voice is like a classic radio host voice, and sometimes I find myself just drifting off into the sound of his flowing melody and losing track of what he's actually saying.

The voice of Cecil's love interest, Carlos The Scientist, is done by the adorable Dylan Marron. Dylan is a sweetheart who is always trying to make the world a better place.

Carlos is a scientist who has come to Night Vale to study the town. He has a strong jaw and gorgeous black hair with just a hint of distinguished gray. His teeth are as perfect as a military cemetery. Cecil falls instantly in love with him, and the fans of the show did too. There is a lot of Night Vale fanfic and art featuring the pair. A lot.

Dylan Marron is actually Latino and gay, which I think gives his performance a little added touch. Apparently the writers of the show do as well since the character of Carlos was originally performed by writer Jeffrey Cranor until they felt it was better to have a separate voice actor do the work.

Mara Wilson is best known as Matilda from the movie Matilda, but she was also Natalie in Mrs. Doubtfire and Susan in Miracle on 34th Street. We haven't heard much lately about this former child actress since she quit acting years ago, but Mara Wilson is still creating amazing works.

In Welcome to Night Vale, Mara is the voice of 'The Faceless Old Woman Who Secretly Lives in Your Home'. She does an amazing job with her voice performances and really does manage to sound like an a creepy, yet charming character.

Check her out at Mara Wilson Writes Stuff

Other Night Vale or Outside Area Residents

Molly Quinn Voice of Fey and an Intern

"Another Important Reminder: Everything is temporary."

The official Night Vale Twitter account posts hilarious, interesting, and awesome tweets. Here are some of my favorites:

Check out more by following Night Vale on Twitter.

"He died doing what he loved: floating adrift on a tiny orb in the cold infinity, surrounded by stardust and void."

The Welcome to Night Vale Store

Don't Forget to Get the Welcome to Night Vale Novels

Each time to cast of Night Vale go out on tour they release a recording of the show. These episodes have a bit of a different feel from the other episodes, with more guest stars and more action.

Each of the released live shows are available on iTunes and Bandcamp.

So far there have been:

Condos - Episode 31b. Everyone in town is lined up to get a condo. Who doesn't want a condo? We should all get condos! What is a condo?

The Debate - Episode 45b. All the mayoral candidates get together for a mayoral debate. Who are you going to vote for? Hiram McDaniels, five-headed dragon? The Faceless Old Woman Who Secretly Lives in Your House? Or someone else? Guests include Mara Wilson, Jackson Publick, Marc Evan Jackson, Mark Gagliardi, Annie Savage, Hal Lublin, and Kevin R. Free.

The Librarian - Episode 63b. Renovations are being performed on the Night Vale Library, as long as the librarians can be avoided. Includes featuring special guests Wil Wheaton, Molly Quinn, James Urbaniak and Jason Webley as WTNV Interns being sent to the library.

Want to start listening to Welcome to Night Vale?

Check it out on Podbay, iTunes, or YouTube. The YouTube video below will take you the Welcome to Night Vale playlist so you can listen to all the episodes.

There's a Monster at the End