A HubPages member recently asked a question about determining the price of old or antique Mickey Mouse toys made by the Ohio Art company. Mickey Mouse as a trademark and character is owned by the Walt Disney conglomerate of companies. Today, Mickey Mouse toys are sold in Disney stores in shopping malls. At least for a period of years, related toys were made in Northwestern Ohio.

Mickey Mouse was little more than a whistling stick figure with mouse ears and Walt Disney's voiced characterization when he began. He first appeared in the black and white Steamboat Willie cartoon (1928), which is known all over the world. The Mouse is likely better and more widely known that US Presidents and religious leaders in all the world's greatest faiths. He may even be better known that The Beatles. Certainly, his symbolic white glove ended up on Michael Jackson's for eternity.

In the 1930s during The Great Depression, the Ohio Art Company produced some Walt Disney products. One was the tin drum featuring the likeness of Mickey Mouse. Once facing closure in the late 20th Century, Ohio Art Company has continued to produce several lines of popular toys in Northwestern Ohio, just west of Toledo.

At one time, Ohio Art was active in a number of manufacturing concerns, including auto parts and clothing dryers. 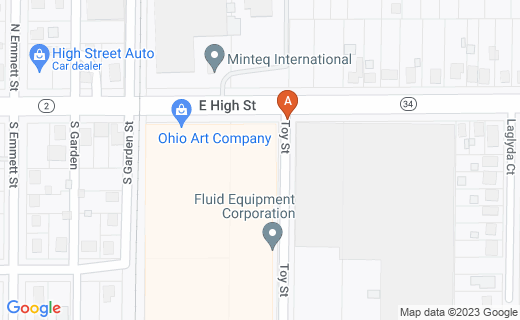 Ohio Art: The World of Toys
Most people know the toy "Etch A Sketch," but relatively few know that Ohio Art Company produced it and some of America's most beautifully lithographed popular toys. Over 400 color photographs of toys from the 1920s through the 1980s and the text explore the evolution of Ohio Art. Catalog pages, information for determining dates of production, and a guide to current values make this a must for toy collectors.
Buy Now

About The Ohio Art Company

Several Of Ohio Art's "Mickey Mouse Drums" have been sold as toys, including a version of the Mickey Mouse Club Show bass drum and a 1930s tin drum.

Several Mickey Mouse drums have been sold as toys, including a version of the Mickey Mousie Club Show bass drum and a 1930s tin drum. The tin drum, from Ohio Art Company, has been found on eBay in 2009 for nearly $300.00 as a starting bid.

This particular high quality toy drum is lithographed tin, a specialty of the Ohio Art Company in toys and signs that the company made between the 1920s through the 1980s. The company still makes toys and other metal items today.

The drum heads are made of linen. The lithography around the sides of the drum shows Mickey and Minnie Mouse, Donald Duck, and Huey Duck - a nephew of Donald. The side ropes appear to be cotton string and the drumstick is made of wood. The size of this drum is small at 6 1/4 inches diameter and 3 5/8 inches tall.

Some versions of this drum have metal drum heads and pictures of Pluto the dog on the sides in addition to the other characters mentioned.

You may like to take your drum to a local antiques dealer/appraiser or contact Antiques Roadshow on PBS.

The company was first founded in 1908 in Archbold, Ohio as a producer of tin picture frames. In 1915, it moved to Bryan OH and acquired lithographing equipment.

By 1917, it was successfully producing lithographic metal tea sets and toys. In 1930, it was incorporated and made a public company with stock. Some of its most successful toys were the Mickey Mouse tin drums in various versions - at least three. But in 1960, it released Etch-A-Sketch® in time for Christmas and was a landslide success.

In the next century, it is remained a success. The manufacturing company continues to make lithographed metal signs and plastics in another division. The toy division now offers over 50 different toy designs, including drums and drum sets, just as it did in the 1930s.

During World War II, Ohio Art made metal products for the US military, but it had remained successful all through The Great Depression when other companies failed. In fact, Ohio Art bought out 4 other companies just in 1930 alone.

These four entities were:

The next year, in 1931, Ohio Art bought Craftsman Studios (tableware), Kenyon Company (printing), and Detroit Publishing Company. They certainly made money during the Depression and Mickey Mouse Drums helped them to do it.

More of the history of Ohio Art Company and its toys can be found in the book shown above, Ohio Art:The World of Toys. Today's most famous toys from the company are Etch-A-Sketch (seen in Toy Story in 1995) and Nanoblock plastic micro-block building sets, which became the ASTRA Toy of the Year in 2011.