Operas That Are Cursed

No curse on any opera has ever had as much authentic documentation as the curse on Richard Wagner’s Tristan and Isolde. Known as the Curse of Tristan, this malediction plagued the opera even before it was performed. The first sign of a problem came during the opera’s composition when Wagner’s wife discovered his year old affair with a woman named Mathilde Wesendonck. The shock caused Minna Planer Wagner to abandon her husband, although the two remained legally married until Minna’s death almost 10 years later. This separation did not cause any kind of freedom for Wagner as he and Wesendonck ended their affair shortly afterwards.

It may well have been a simple coincidence that Wagner was writing Tristan and Isolde at the same time his personal life fell apart. But what followed makes it almost seem as if the opera was trying to keep itself from being performed.

It took Wagner five years to complete the work and another six years to arrange a premiere. His main difficulties were funding (a problem later solved by Mad Ludwig of Bavaria) and finding musicians capable of performing this notoriously long and difficult work. After seventy rehearsals, an almost unbelievably high number, things were in order for Ludwig and Malvina Schnorr von Carolsfeld, two of the greatest dramatic voices of the time, to sing the lead roles; furthermore, Wagner had secured the services of the genius conductor Hans von Bülow (Wagner was also at this time having an affair with von Bülow’s wife, Cosima, but never mind!). But the road for Tristan and Isolde would never be easy: The premiere scheduled for May 15, 1865 was canceled at the last minute when Malvina Schnorr von Carolsfeld suddenly lost her voice. It took almost an entire month for her to recover and for everything to be ready for the premiere on June 10, 1865 at the Bavarian State Opera. The reception of the work was disastrous, but Wagner was determined to limp things along. His refusal to withdraw the work led to horrifying “coincidence” that Ludwig Schnorr von Carolsfeld, the original Tristan, suddenly died on July 21, 1865. He had only recently turned 29 years old and to this day the true nature and cause of his fatal illness is unknown. After his death, the 39 year old Malvina ended her career, despite the fact that she was at her peak vocally. It is not known whether or not she ever blamed Wagner or The Curse of Tristan for the destruction of her life.

The curse was not over yet though: On June 21, 1911, Felix Mottl suffered a heart attack while conducting the second act of Tristan and Isolde. He died on July 11th at the age of 54. On July 20, 1968, 60 year old conductor Joseph Keilberth also suffered a heart attack during Tristan and Isolde’s second act. Supposedly both men dropped while conducting the same point in the music, but as no one can ever say exactly what part of the music it was, this could simply be a myth.

But that doesn’t take away from the fact that The Curse of Tristan obviously exists and in particular has a connection with the month of July. All three victims died between the dates of July 10th and July 21st. Furthermore, it was sometime during July of 1858 that Richard Wagner and his wife Minna met for the last time. Perhaps there is something more diabolical woven into the leitmotifs of Tristan and Isolde than anyone can ever know.

To be perfectly honest, the idea that Giuseppe Verdi’s La Forza del Destino is cursed is more due to cultural superstition than actual events. The title translates to The Force of Destiny and the story is an emotional melodrama about the events caused by the curse put on Leonora by her dying father. The supposed curse in real life has only ever been feared by Italians. For example, Pavarotti never sang the tenor role in this opera, despite singing nearly every other role in the Italian repertoire. The one event connected with La Forza del Destino that leads one to wonder if there is indeed a curse has to do with American baritone Leonard Warren.

Leonard Warren was one of the greatest Verdi baritones of all time. He was particularly associated with the Metropolitan Opera and was singing La Forza del Destino there on March 4, 1960. During Act III, Don Carlo, the baritone role, sings a great aria that begins with the words Morir! tremenda cosa!, which roughly translates to Death! What a tremendous thing!. After singing this aria, Leonard Warren suddenly collapsed and died a few minutes later of a cerebral hemorrhage. 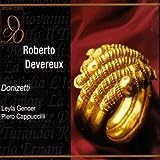 Donizetti never paid much attention to his 1837 opera about Queen Elizabeth and the Earl of Essex. The main reason was that he somehow felt Roberto Devereux was connected with the extraordinary bout of bad luck which caused the deaths of his wife, his mother, and his father between the years 1836 and 1837. Three deaths within one year is rather extreme. But it still could be the result of coincidence rather than because of a curse. However, this opera has never been performed enough for anyone to track whether or not bad luck is indeed connected with it.