The Original 1991 board game commercial for "Ouija"

Synopsis: A group of friends must confront their most terrifying fears when they awaken the dark powers of an ancient spirit board.

New 2013 design for a modern day Ouija board

- The atmosphere and settings were creepy, but vastly underutilized.

- The plot has a few interesting plot twists that you don't see coming, but it's not enough to save the movie.

- The film tends to rely too much on jump scares rather than building up the tension first through the creepy atmosphere.

- Story can be predictable at times, and it's a bit cliched as well. 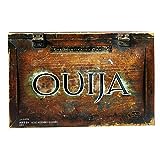 Damn you, Hasbro! Damn you to hell! First you manipulate the minds of grown men everywhere to follow a TV show like "My Little Pony: Friendship is Magic"; which is based on a toy franchise geared towards little girls. Yet, you still have the audacity to sell a board game that potentially allows you to talk to the dead!?! Plus, these board games are sold at "Toys R' Us" too?!? Oh the humanity! And if that wasn't bad enough, you allow Universal Studios to make a damn movie promoting the game. What kind of monsters are you, Hasbro? Promoting a toy that could potentially be dangerous to children. Oh the children! Won't someone please think of the children!!!!! If you haven't figure it out by now, I'm being sarcastic.

All kidding aside, the idea of the Ouiji board has been around for centuries. Some reports suggest that it's been around well since the late 1800's. The general premise of the game is that you and your friends would use the Ouiji board, and ask it some questions about your lives; while using it to speak to the dead allegedly.

Some people see it as a harmless game built on a gimmick, but that hasn't stopped others from saying otherwise. Some people claim that owning an Ouiji board can be quite dangerous because if you do open up a connection to the spirit world, then there's no way you can control what comes out of it.

According to some people that I've spoken to about this, they claim that if you try to get a hold of someone in the spirit world, then there's no guarantee that some evil spirit won't be standing right next to the person you want to talk to. And whoever the strongest spirit happens to be, then that's the one that's going to end up in contact with you. For example, if you try to contact your dead wife, then chances are you might end up encountering an evil spirit instead if your loved one's ghost isn't stronger than the evil demonic entity standing next to her at the time.

Is it fair? No, but that's life. Or afterlife...i should say..... However, it's interesting to note that psychologists have already debunked the idea of Ouiji boards, but I guess it's fun for some people to speculate. Hell, some people have actually boycotted Hasbro and "Toys R' Us" simply because they sell "Ouiji" boards; claiming that they're allegedly the gateways to hell, and ranting about how irresponsible it is for Hasbro to sell them to kids. Whatever your beliefs are, I think we can all agree on one thing....

The film, "Ouiji", is an obvious marketing ploy by Hasbro, as they're even listed in the closing credits. Therefore, you know this movie is nothing more than a giant product placement commercial for them. However, if we ignore that obvious little fact, then how does the rest of the movie hold up? Eh..I guess one could say it's a bit of a mixed bag.

On the surface, "Ouiji" seems like a fairly decent supernatural horror flick that should be fun for the kiddies to watch around this time of year. However, outside of a few obvious jump scares, the film itself isn't that scary.

Sure, I'll be the first to admit that the premise wasn't that bad, and I liked how the story was chalked full of twists that you couldn't see coming half the time. However, the tension and build up to the jump scares was almost non existent; which made the film very predictable, and a bit cliched as well. .

Whereas in a great horror film, the tension and atmosphere play a pivotal role in establishing the frights. It slowly builds up tension, as it would allow the audiences' minds to wander. Seeing a few shadows move here and there. The tension would build up subtly, and when you least expect it, then it would scare the crap out of you. Sadly, "Ouiji" doesn't do any of that.

It jumps right into the supernatural elements right away. Unlike most horror films that start off slowly to establish the characters before getting into the frights, "Ouiji" immediately shows a young teenage girl getting killed, by a ghost she awakened, because of the Ouiji board. Fast forward a couple of days later, her friends try using an Ouiji board to contact her from beyond the grave; while even using her own house to play the game. However, they soon realize that it might have been the biggest mistake of their lives, as strange things start to happen.

Take in mind, this all happens throughout the first act of the film. Hence, there's hardly any time for the audience to get know the characters on a personal level. Sure, we're given a few lines of exposition about who these people are, but it's never enough for us to ever make us truly care about them. Granted, it sucks to watch people die, but if you don't care about the characters, then it's hard to feel emotionally invested into the story.

As for the acting, I have to say everyone seems to play their parts rather well; in spite of the fact that they're not given much to work with. The visuals and atmosphere seem scary, but it's poorly underused because the movie never allows the story to slow down, so we can take it all in.

Although "Ouiji" has a great premise to work with, the film falls short of it's full potential. Making it arguably one of the most forgettable horror flicks of all time.